A guide to the best parks in Dubai

Things to do
Well-being

In need of some city respite? Or just want to get fit for free? Unwind on a patch of green with our handy guide. Just don’t forget your picnic basket and sunblock… 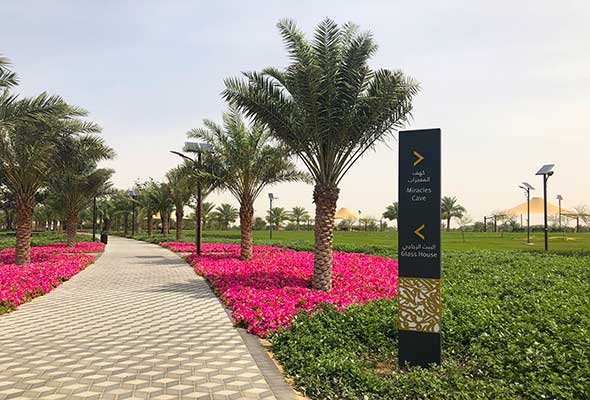 Quranic Park is a brand new Dubai attraction now welcoming visitors. Located in Al Khawaneej, the Quranic Park is designed to give a better cultural and educational understanding of the Islamic heritage, while still being a fun place to visit for children, families and those looking to learn more about the Holy Quran.

The park that spans over of 60-hectares, but it has two main attractions within the space that offers visitors a brilliant, intelligent insight into the several areas of the Holy Quran: the Cave of Miracles and The Glasshouse

Apart from the beautiful greenery in the Glass House, scattered throughout the park are flourishing plants, flowers and trees, and there are orchards as well. The orchards are located at various locations at the park but look out for signboards inlaid with golden Arabic calligraphy that will point you in the right direction.

At one corner of the park, you will find One Coffee House, a quaint cafe with friendly staff serving up coffee, chocolates, and desserts.

Located right next to the café is a small playground for the little ones, so they can be kept busy while you fuel up.

Quranic Park, Al Khawaneej, close to Mushrif Park in Dubai, 8am to 10pm daily, Dhs5 to enter the attractions. 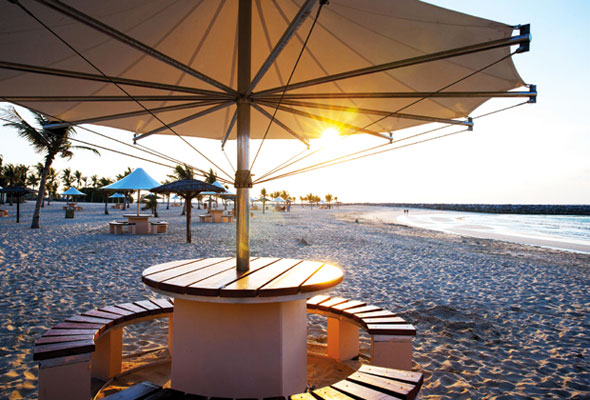 An unsung hero of Dubai’s parks, Al Mamzar is a secluded gem. Perched majestically on a headland at the mouth of Khor al-Mamzar near Sharjah, it is both a lushly landscaped park and pristine beach all rolled into one.

Spread over 99 hectares, it includes four beaches, a large manicured lawn, swimming pools, an amphitheatre, children’s playgrounds, basketball courts, and areas for both football and volleyball. You can even rent a cabin or cruise along the park’s extensive network of bicycle paths if you wish. With 1,600 palm trees and 300 coconut trees, you can also be assured of shade when necessary.

Two highlights, however, are the park’s 28 barbecue areas and a 12-foot concrete half pipe that is hugely popular amongst the city’s skateboard community. Anybody with a child who is big into kick-flips and ollies will appreciate the draw.

Small kiosks selling drinks, ice creams and assorted treats are sprinkled around the park, but it’s picnics and barbecues that are the big draw.

Al Khaleej Street, Al Mamzar, Sunday to Wednesday 8am to 10pm, Thursday to Saturday (and official holidays) 8am to 11pm, Dh5 per person, Dhs30 per car. 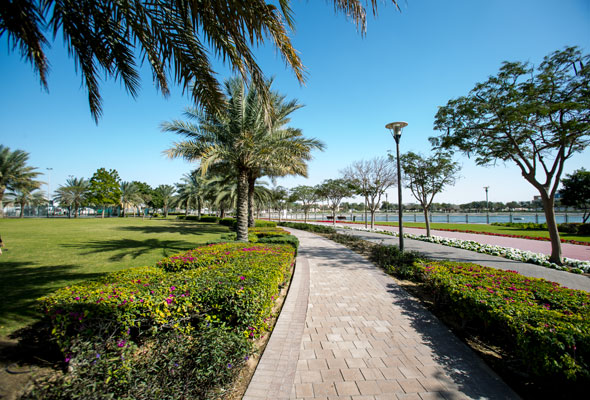 One of Dubai’s smaller parks, don’t let its compact size put you off. There’s plenty to keep you entertained, not least the large central man-made lake around which it is built.

For starters there is a cushioned 1.5 kilometre running track and accompanying cycling path, both of which encircle the lake. Then there’s the basketball courts, gym equipment, bicycle hire, children’s play areas, bouncy castles and peddle boats for hire.

In fact, if getting fit is your motivation, you could do far worse than make Al Barsha Pond Park a regular haunt. There are tennis courts, football pitches and volleyball courts, all of which can be booked at the onsite office.

No park would be complete, of course, without picnic areas and greenery, and Al Barsha Pond Park delivers with aplomb. A relaxing green space in the urban environment of wider Barsha, there are fresh date palms, a variety of trees and flowers, a few children’s rides and a beautiful fountain too. There are also small kiosks close to the entrance that sell popcorn and soft drinks. 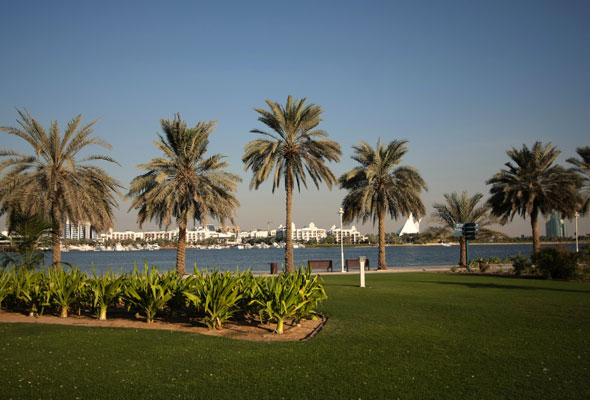 Located between Garhoud and Maktoum bridges, Creek Park is serenely situated on the edge of Dubai Creek. As locations go, it’s hard to beat.

Glorious green lawns, botanical gardens, children’s playgrounds, train rides, barbecue areas, restaurants and burger stalls are just the beginning. Sprinkled throughout what is one of Dubai’s largest parks is a host of unique attractions. There’s a mini golf course and go-kart track, a paved promenade and theatre, and the park’s very own cable car. Suspended 30 meters in the air, the latter runs for 2.3 kilometres along the length of the park and provides wonderful views of Old Dubai’s skyline. 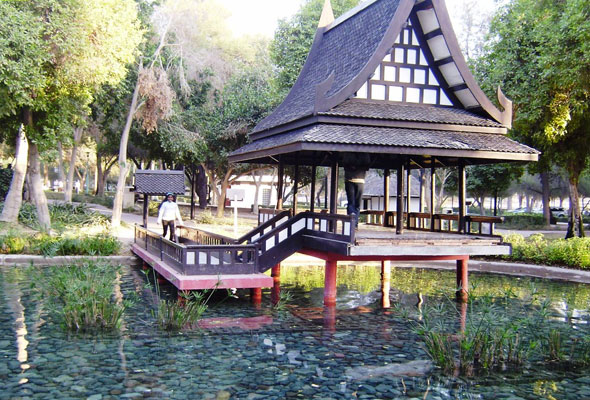 First opened in 1974, Mushrif Park is the veritable granddaddy of Dubai’s parks. More a national park than a regular picnic-in-a-green-space kind of place, all of Dubai’s other recreational spots pale in comparison when it comes to scale. It even includes a 35,000 square metre Ghaf tree forest.

Spanning more than 5.25 square kilometres, more than 70,000 trees have been planted here. It’s so big in fact that you can actually drive through it. There’s a five-kilometre walking, cycling and jogging track for goodness sake, as well as two 25-metre swimming pools and basketball, volleyball and handball courts.

For many, however, the highlight is the Aventura Nature Adventure Park. Located amidst the forest of Ghaf trees, this high ropes adventure course offers everything from zip lining to rope course challenges. You can choose from more than 85 challenges across different age and difficulty levels, with circuits spread across five different levels – from the ground to higher up in the trees. It also includes the longest series of tree-top zip-lines in the region. Tickets are separate to the park entrance fee.

As with all other parks, Mushrif also features children’s play areas, barbecue spots, restaurants and canteens, but also a train ride, equestrian centre and camel riding. There’s also a World Village comprising 13 models of traditional houses, including a traditional German Hausbarn and an ornate Thai house. 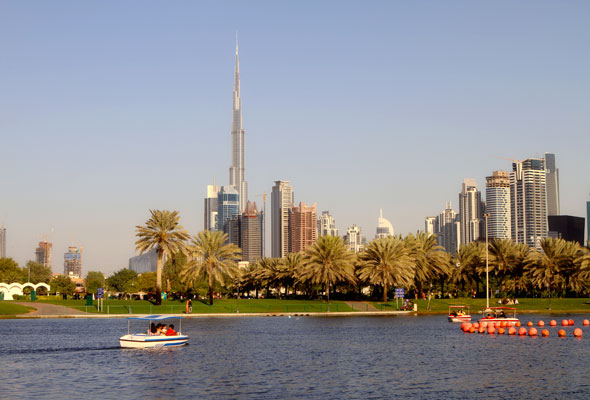 A Dubai favourite that was first opened in 1975, Safa Park may be smaller in size than it once was but it still retains a certain centre-of-the-city feel.

Located just off Sheikh Zayed Road, it is beautifully landscaped, with lakes, trees, more than 200 species of birds, and great views of both the Burj Khalifa and Dubai Water Canal. The latter now cuts through one side of the park and is largely responsible for its reduced size. As well as a certain percentage of green space being lost, The Archive arts library and cafe has also gone, as have much of its sporting facilities. Only the basketball courts are now in active use.

What remains, however, is a joy. Its barbecue spots and play areas are some of the best in the city, while grassy lawns cover roughly 80 per cent of the park. As such it is perfect for picnics and social gatherings. Freshly Ground Sounds, an independent music initiative, has held gigs there in the past, while the park was once home to the hugely popular Dubai Flea Market, which has since moved on to Zabeel Park.

One of its greatest draws, however, is a 3.5-kilometre spongy running track, which follows the park’s perimeter. A favourite among Dubai’s running community, it’s hard to beat as a picturesque running course. 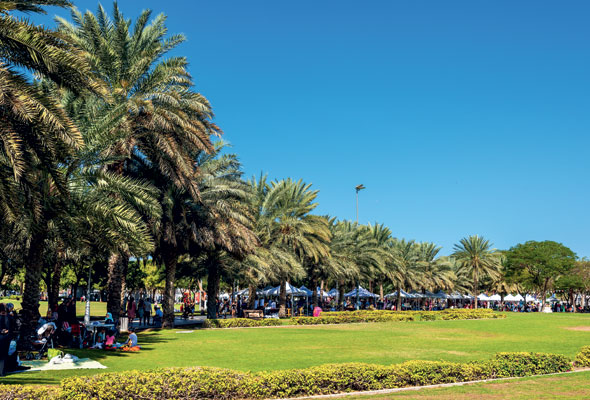 Zabeel Park has come into its own in recent years. No longer simply a green space with the usual cluster of amenities, it has morphed into a 21st century, technology-driven destination in its own right. As such it is now considered one of the most significant and most outstanding projects to be produced by Dubai Municipality.

In size it is equivalent to 45 football pitches and is remarkably tranquil considering its location close to some of Dubai’s busiest intersections. There are barbecue and picnic areas, restaurants and boat rides, a jogging track and fitness centre, botanical and horticultural areas, as well as a cricket pitch that can be booked for matches.

But that’s only the beginning. There are three different zones – the Alternative Energy Zone, Communications Zone and the Techno Zone – all of which are technology-based and feature educational and interactive exhibits. There’s also Dubai Garden Glow, with its animatronic dinosaurs and glow-in-the-dark garden made of 10 million energy saving bulbs and yards of recycled luminous fabric.

Last but by no means least, there’s The Dubai Frame, the city’s striking architectural landmark. Providing incredible views of both old and new Dubai, it is a truly remarkable spectacle. Standing at 150 metres tall, it has a glass floor along much of its 93 metre-long bridge, so if you suffer from vertigo you may have problems walking on the glass. The best solution? Don’t look down.

Zabeel District, near Al Jafiliya metro station, Sun to Wed 8am to 10pm, Thur to Sat (and official holidays) 8am to 11pm, Dhs5. 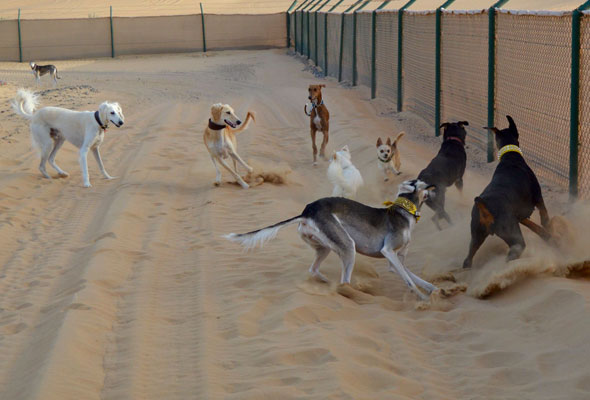 Since it’s illegal to have your dog off-leash, the aptly named Bark Park is a haven for pet owners. The desert park is a fully enclosed, clean and private area for dogs to exercise and socialise off their lead, it’s certified and approved by the Dubai government.

It’s split between areas for little dogs and big dogs, so all dogs can play and explore without being intimidated by their larger counter parts, and it’s well lit at night, which is an added bonus.

Facilities include a large and chlorine-free swimming pool for big dogs, a cool down pool for smaller dogs, agility equipment and obstacles, shaded areas to relax in and a shop for stocking up on all your four-legged friends’ favourite things.

Bark Park Dubai, Al Awir, just outside of Dubai, daily 5am to 8am and 6pm to 10pm, Dhs50 weekdays, Dhs75 weekends. barkparkdubai.com 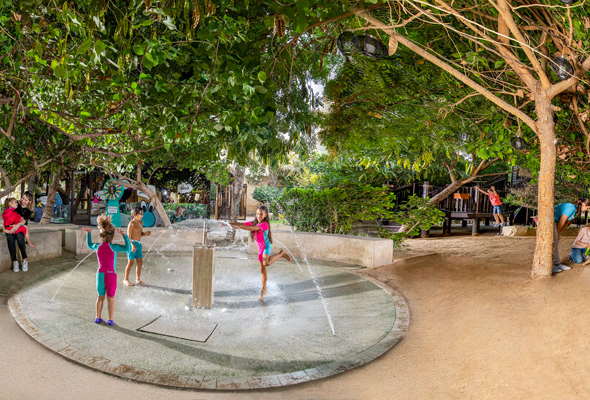 The perfect spot for some family-friendly alfresco fun, X Park Jnr has been designed with kids in mind. Found just off Kite Beach, it’s described as a “natural forest-style playscape created to bring kids closer to Mother Nature”.

The forest-inspired space is filled with trees, plants, streams, a few friendly chickens, ducks and goats as well as tree houses, wooden bridges, climbing nets, a mud kitchen and sand area – so be prepared to hose the little ones down before getting back in the car after an afternoon here!

X Park Jr., 35A Mizmelah St just off Kite Beach, Dubai, 8am to 6pm Saturday to Wednesday, 8am to 8pm Thursday and Friday. Dhs80 for two hours for one child accompanied by up to two hours, Dhs30 per hour thereafter. xparkjr.com 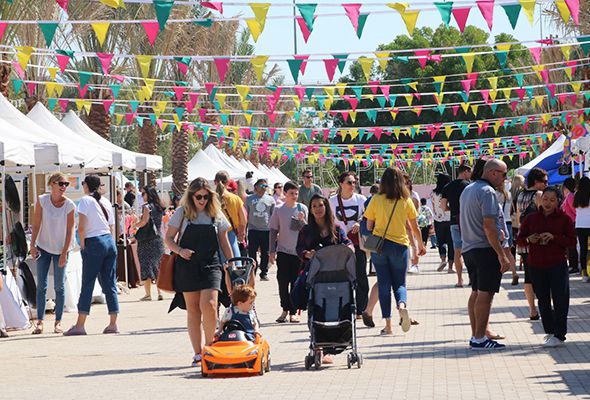 While it’s a quiet spot through the week, it’s bustling on weekends thanks to the arrival of The Ripe Market, which returns on October 25. The Ripe Market will run every Friday from 9am to 7pm and every Saturday from 1pm to 8pm. There’s an array of stalls to peruse, offering market goers everything from organic fruit and vegetables and freshly baked breads, to stalls that are bursting with colourful clothes, cute beach cover ups, eclectic handmade jewellery, handpainted artwork, crafts and more.

When it comes to entertainment, The Ripe Market have got the whole family covered with yoga classes, kids’ activities, a petting zoo, horse riding, workshops and live music to get involved in.

It’s also soon set to welcome a dedicated dog park called unleashed, meaning you’ll be able to take your four-legged friends along for a family fun day too.

Things to do
Well-being
EDITOR’S PICKS
All Dubai residents must now obtain a permit to leave home
READ MORE
Coronavirus rules in Dubai: your questions answered
READ MORE
Free bus and half-price Dubai Taxi rides for next two weeks
READ MORE
Dubai's best Easter eggs, cakes and hot cross buns delivered
READ MORE
MOST POPULAR
Traditional recipes from top Italian restaurants in Dubai to try at home
McGettigan's Dubai launches a series of short online cooking classes
Watch: this video shows Dubai like you've never seen it before
5 ways to have a capital Easter in Abu Dhabi
Remembering the “ubiquitous voice of Dubai” Richard Coram
YOU SHOULD CHECK OUT
Our website uses cookies and other similar technologies to improve our site and your online experience. By continuing to use our website you consent to cookies being used. Read our privacy policy here.