So many staycations, so little time…

After a rollercoaster year only one of the hotels due to open in 2020 made it to launch day (ME Dubai). However there’s still more to expect this year and a few that have been delayed a little until net year. Among them are a seriously wow-worthy array of luxury hotels, complete with a range of exciting dining concepts, lavish pool facilities, and incredible citywide views.

From the super-luxury, to the colourful and creative, here are the best hotel openings expected in 2020 and 2021. 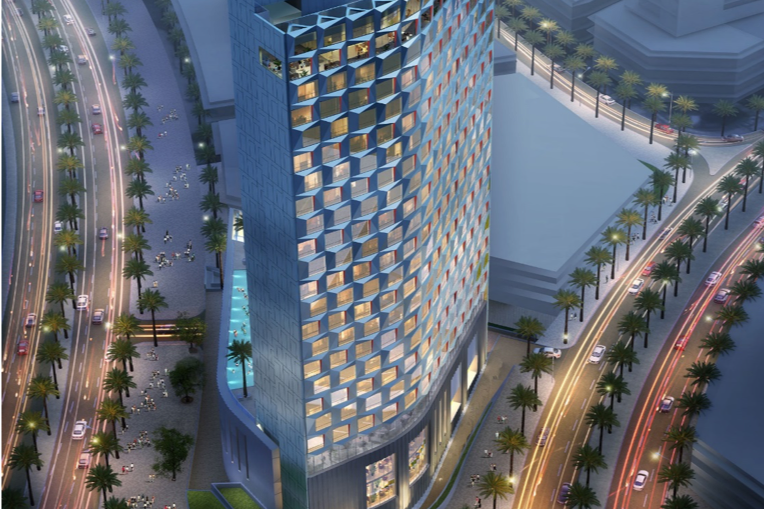 A brand new hotel is set to open in Downtown Dubai this October. Called Hotel Indigo, it will be a space for shoppers and young creatives to relax and enjoy in the heart of Downtown. With an artistic design and creative areas, it’s set to be unlike its luxurious neighbours. The pool has its own 25-metre infinity pool, yoga studio and even more to explore. You’ll also find a contemporary cocktail bar and Levantine cafe. 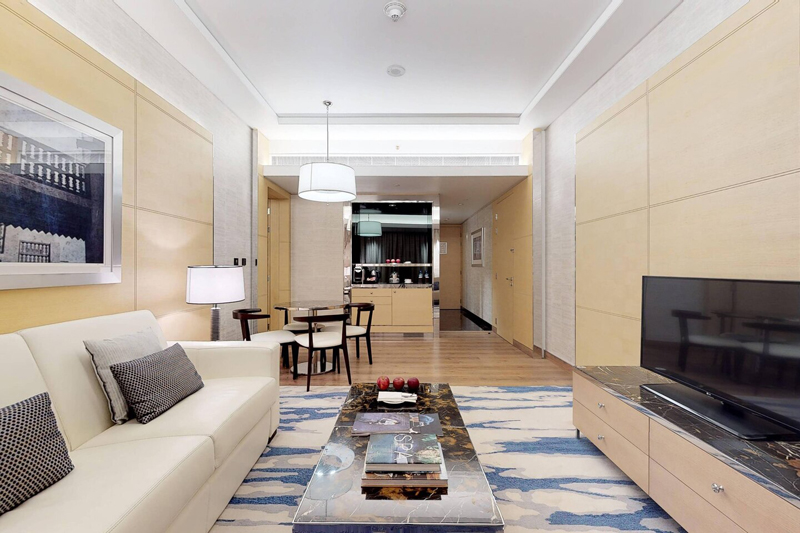 The first Marriott resort in Dubai, set to open on Palm Jumeirah, will include eight food and beverage outlets, including Korean, Italian, Japanese and Mexican cuisines. There will also be a rooftop bar called ‘Above Eleven’ which will serve Peruvian cuisine and will feature a garden maze in the entrance. All of the rooms and suites will come with a private balcony overlooking the Arabian Gulf, when the resort opens in November 2020. 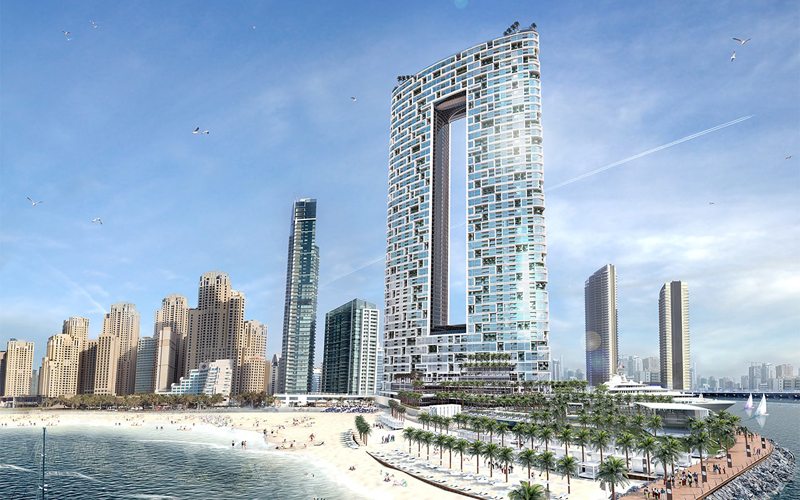 You might have noticed the unique architecture of this bespoke hotel being created on the edge of Jumeirah Beach Residence, next to Doubletree by Hilton. The two towers are 74 storeys each, connected at the top and bottom to create a frame-like structure. The property will be home to 217 rooms and suites and has private access to 100 metres of pristine sandy beach, as well as prime views of the soon-to-open Ain Dubai. As well as five restaurants, there’s four pools – including a lavish infinity pool on the rooftop where the two towers meet. 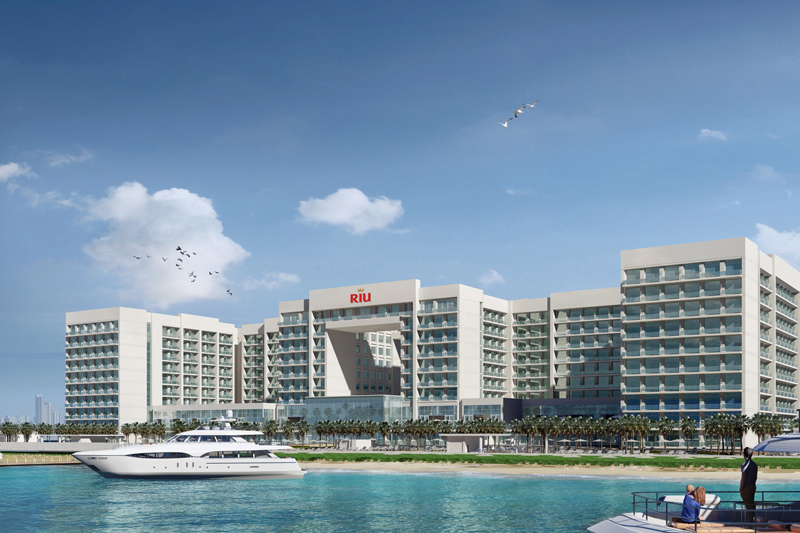 Deira Islands, the offshore project by Nakheel will be home to a beachfront property by Spanish hotel chain, Riu. The 750-room hotel will be an all-inclusive resort, complete with access to the soon-to-open Deira Mall and Deira Islands Night Souk. 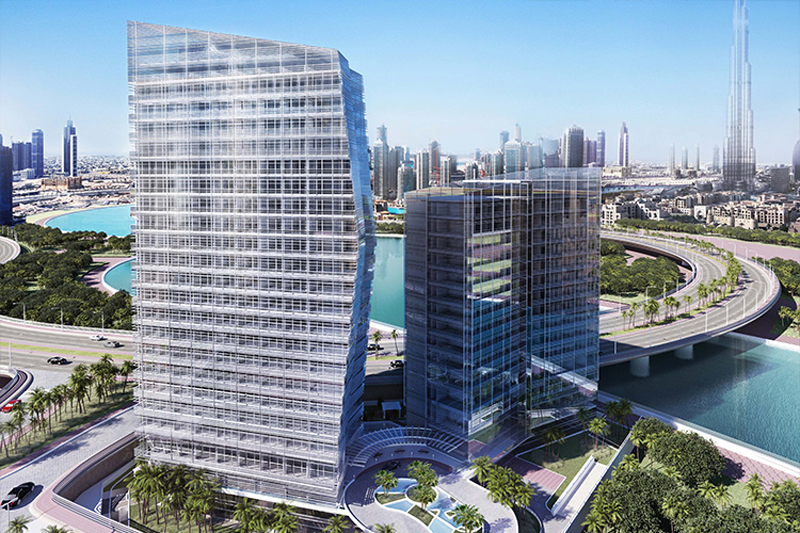 Mater developer Omniyat will be opening a luxury hotel in Burj Khalifa District, Downtown Dubai. Langham Place is the developer’s first luxury city hotel, offering 167 guests rooms plus a number of serviced residential apartments. The property promises views of Burj Khalifa and Dubai Canal, when it opens its doors later this year. 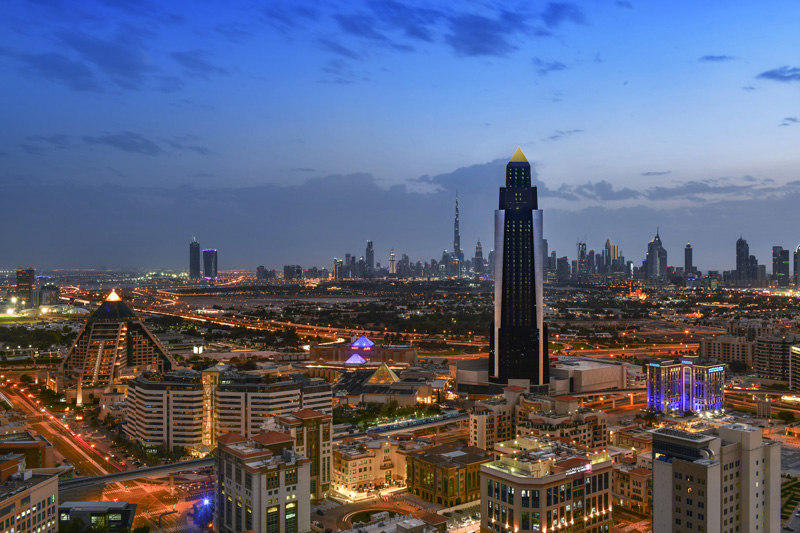 Accor is due to launch Sofitel Dubai The Obelisk, (formerly Sofitel Dubai Wafi), connected to Wafi Mall, later this year. The 595-room property will be the largest Sofitel hotel in the Middle East, inclusive of 97 luxury serviced apartments. The hotel plans to open Amsterdam-born Asian restaurant Taiko, created by executive chef, Schilo van Coevorden, British gastro pub The Nine, a modern brasserie at the helm of a French celebrity chef, as well as a French patisserie in the lobby and a pool bar. 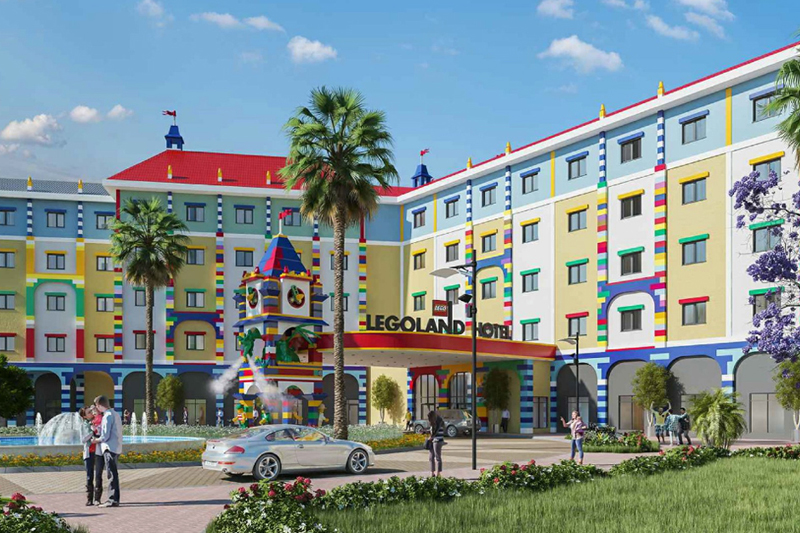 Dubai Parks and Resorts, the home of Motiongate, Bollywood Parks and of course Legoland, will become home to the Middle East’s first Legoland hotel in 2020. The hotel, which is set to have 250 lego-themed rooms, will feature a castle play area and a disco elevator within the resort. Set to open in the last quarter of this year, a first-look render has revealed a candy-coloured exterior surrounded by perfectly manicured lawns. 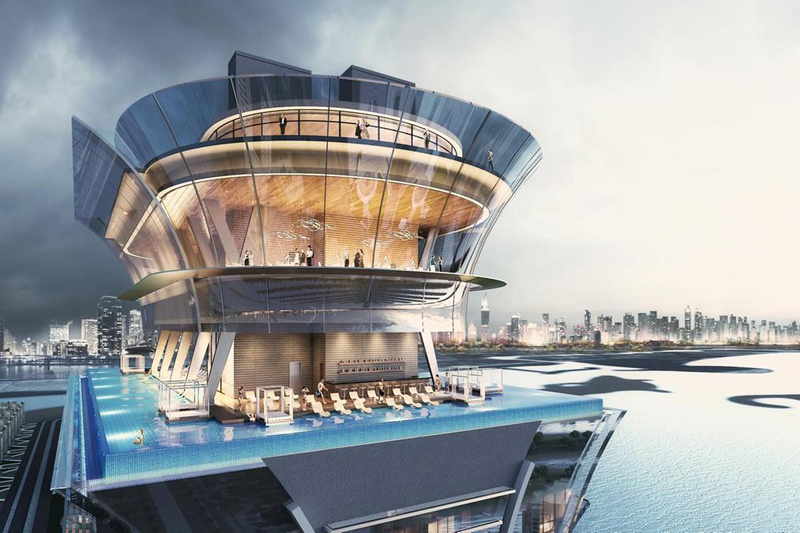 The Palm Jumeirah St Regis will be a 289 room hotel – with the rooms spanning the first 18 floors of The Palm Tower, while the upper floors of the building will be made up of 504 luxury apartments. Originally pipped for Q4 2020, the hotel’s website now states that it will open in February 2021. However the pool and restaurants are not expected to open until Q4 2021. AURA Skypool will also open as part of a three-floor luxe dining and entertainment destination atop Palm Tower. One floor above on level 51 the famed SUSHISAMBA restaurant will open, serving up a mix of Japanese, Brazilian and Peruvian cuisine; while the 52nd floor will play host to the Palm Tower’s much-awaited viewing deck, aptly called The View. 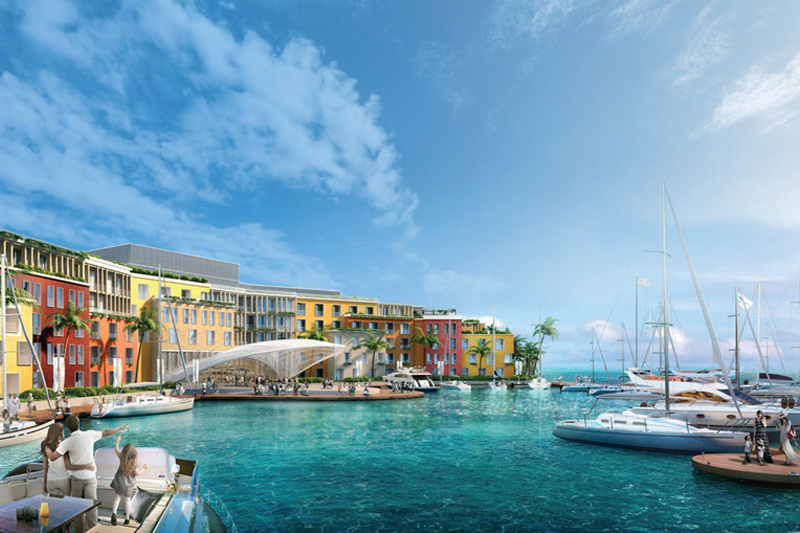 Portofino Hotel will be a deluxe five star family-only hotel on Main Europe island of The World Islands and is the first in the region to operate and cater exclusively to families. The 451-room hotel has been designed in a traditionally European style, with every room offering a sea view. The hotel was originally on track to open at the end of 2019 but has since been pushed to February 2021. 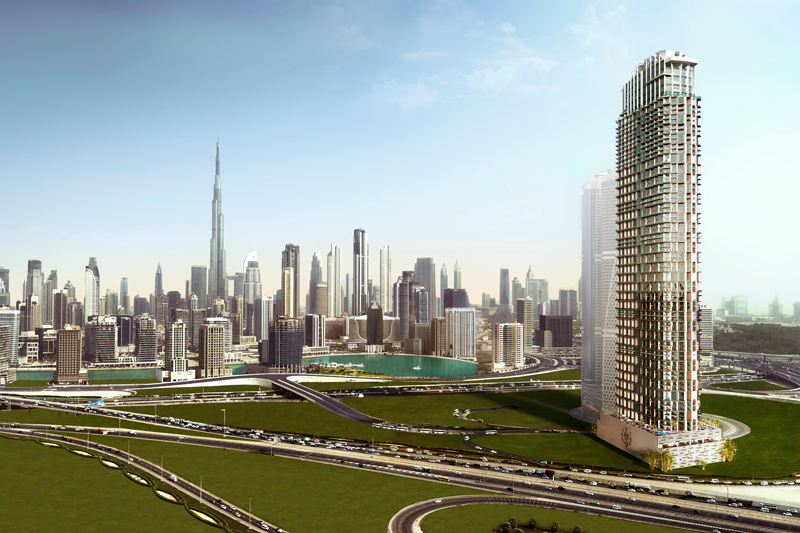 The five-star SLS Dubai Hotel & Residences will be one of the tallest hotels in the city when it opens in the first quarter of 2021, and will boast 254 expertly designed hotel rooms, 371 residential units and 321 hotel apartments. For dining, guests will be able to choose between Italian restaurant Fi’lia (which will also serve as the all day dining restaurant) on level 70 and Carna, a steakhouse by award-winning Italian butcher Dario Cecchoni found on the 74th floor. For relaxation, Ciel Spa, located on the 69th floor will feature 7 treatment rooms, steam rooms, experience showers, plunge pools, a salon and gym. In addition, the property’s nightlife venue, Privilege, will be located on the rooftop featuring expansive interior lounge space that opens up directly onto the roof terraces and infinity pools. 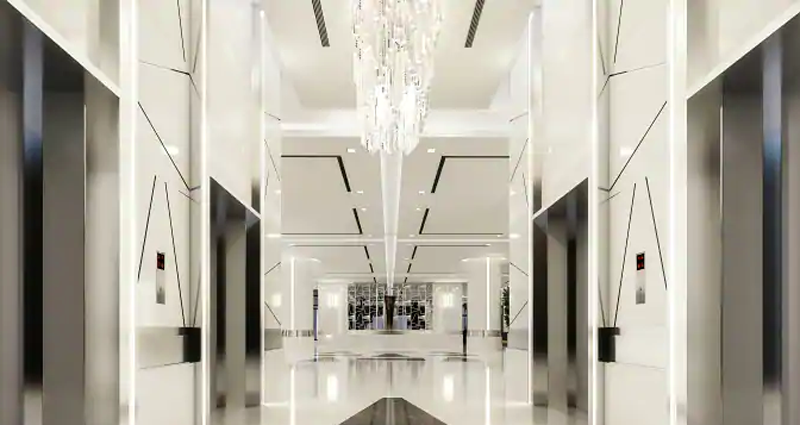 Beachside hotel Hilton Dubai Palm Jumeirah, was due to open in September 2020, however has now been pushed back by one year, and will open on the main trunk of Palm Jumeirah. Along with stunning ocean-view rooms, the hotel’s exciting selling point is the food and beverage offering. Many of the city’s popular haunts will be setting up shop in the new property. You’ll find a brand new Trader Vic’s (and Trader Vic’s Beach Bar), a new concept by McGettigan’s, CLAW BBQ, Jones the Grocer and Barfly. 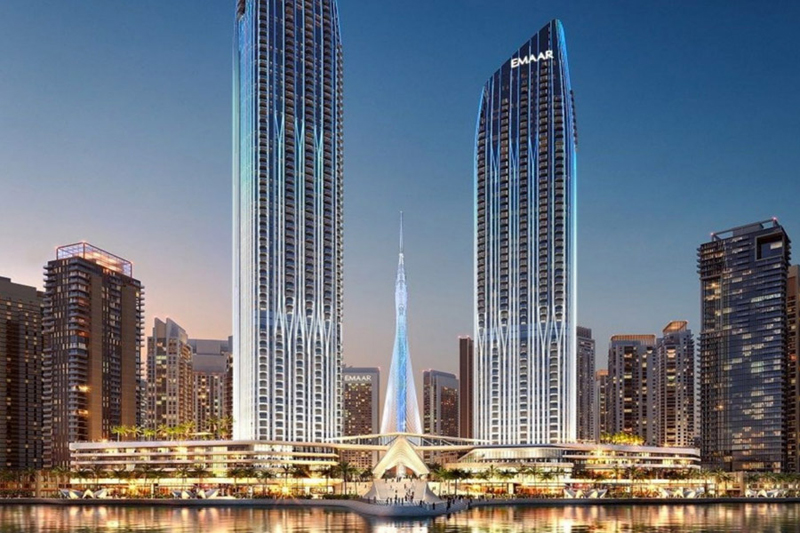 Address Harbour Point will be a two-tower hotel and serviced apartment property in Dubai Creek Harbour. The first tower will have 66 storeys while the second will be 55 storeys tall, with 14 floors reserved for hotel guests, offering a total of 202 rooms. The development will be close to the Dubai Creek Tower which, once complete in 2021, will be the tallest structure in the world. 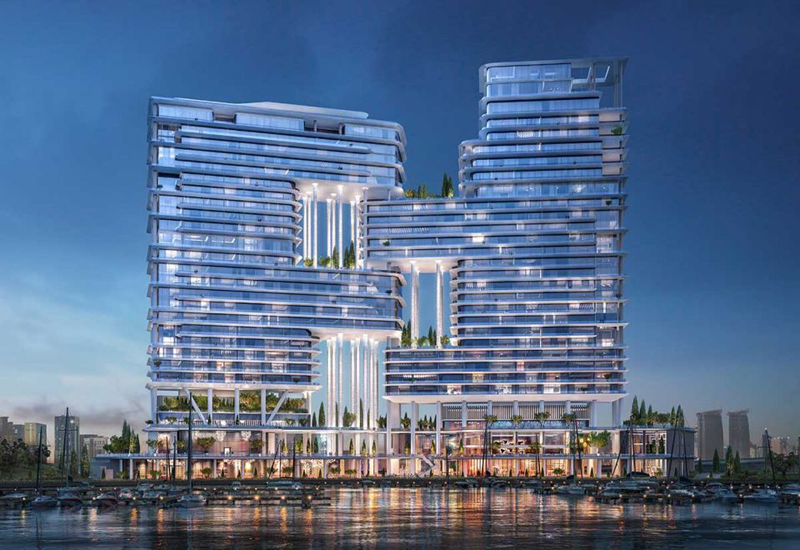 Located in Business Bay, this will be the most modern Dorchester property in the famed hotel chain’s collection. The futuristic design has two interlocking (Tetris style) towers, a residential section with 39 apartments and a large rooftop pool. The ultra-luxury property is now expected to open at the end of 2021. 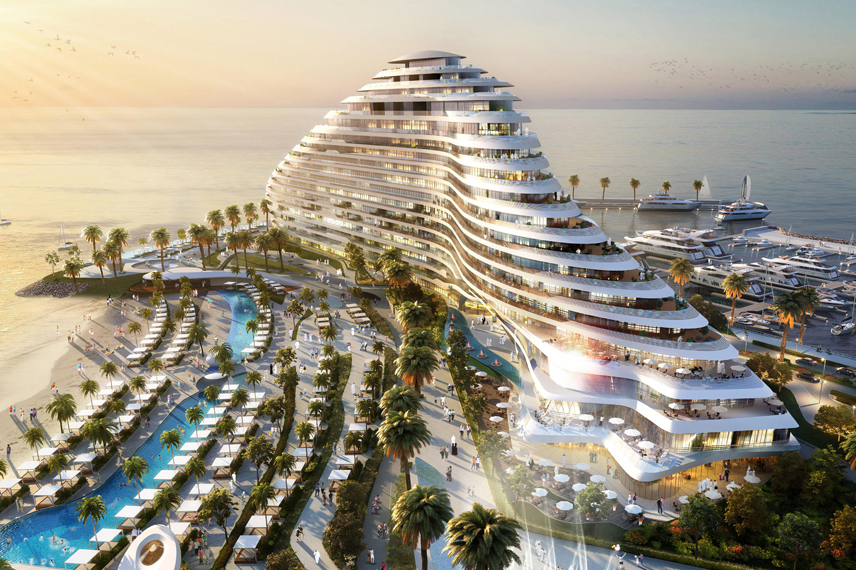 Jumeirah Marsa Al Arab is currently under construction close to Jumeirah Beach Hotel. The five-star luxury hotel will have 280 rooms when it opens at the end of next year. The location also has nine luxury on-water villas which have all already been sold. 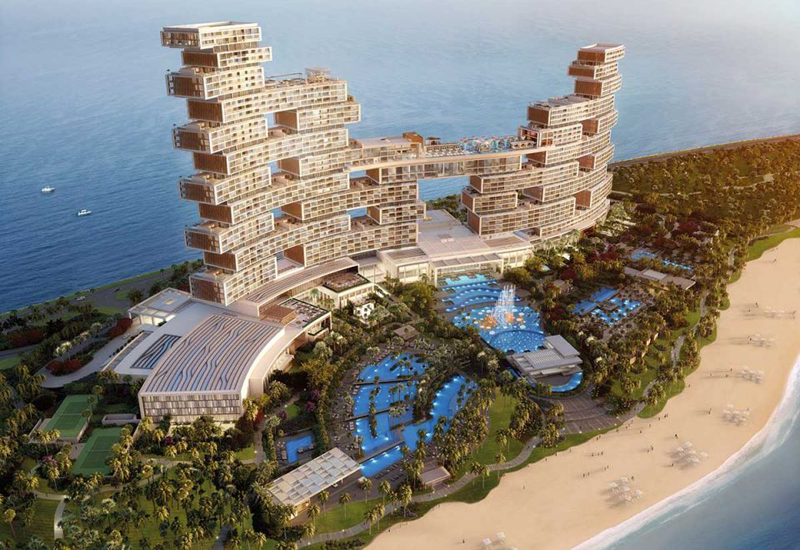 The Royal Atlantis Resort & Residences is on track to open at some point in 2021. The Dhs5.15 billion property will be made up of 231 luxury apartments, 693 hotel rooms and 102 suites. The 43-storey hotel will also feature 90 swimming pools, including a stunning rooftop infinity pool suspended 96 meters above The Palm on level 22. The hotel will exclusively host restaurants helmed by international celebrity chefs, including Gastón Acurio, Costas Spiliadis, Ariana Bundy, Heston Blumenthal and Jose Andres. 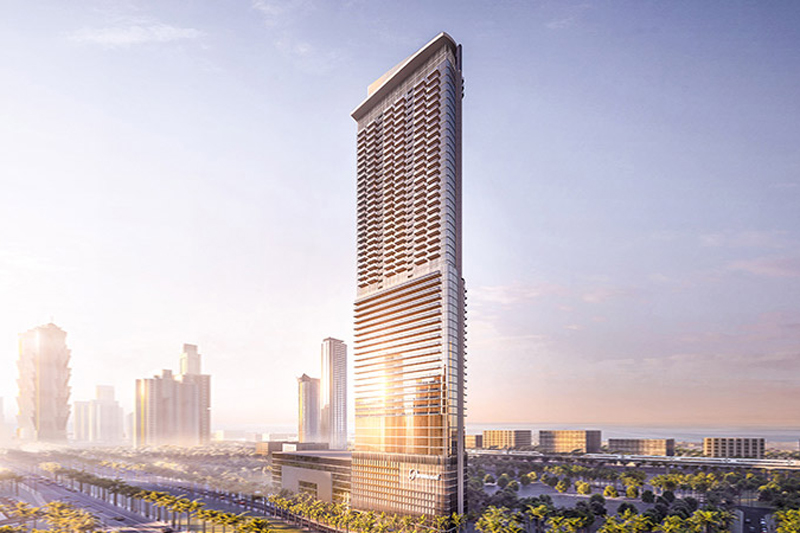 The sister property to Damac’s Paramount Hotel, Paramount Tower, is due to open next year, close to Business Bay Metro Station. The 63-storey tower will have a hotel between levels 15 and 25, with the rest reserved for residents. It will also have a rooftop infinity pool with stunning views of the Burj area, restaurants and lounges, fitness and wellness centre, luxury spa, fitness and wellness centre when it opens. 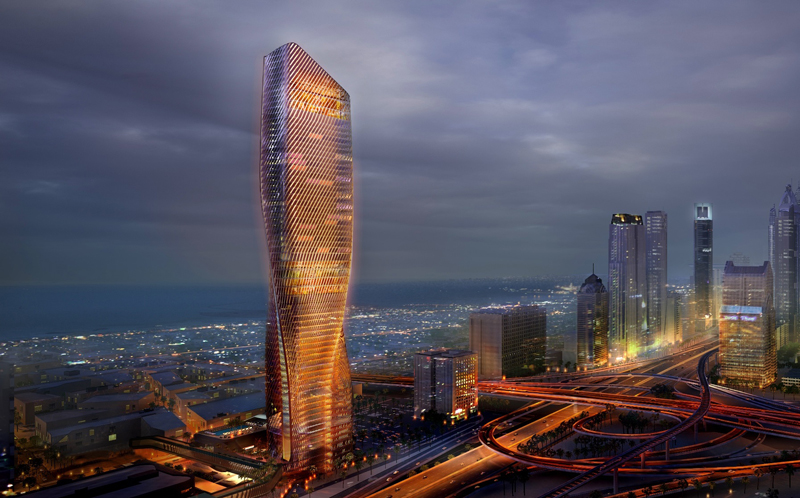 The second Mandarin Oriental property to reach Dubai will be located on Sheikh Zayed Road. The 63 storey property will feature 257 rooms, suites and serviced apartments. It is said to have been designed to ‘reflect local culture, with features inspired by Mandarin Oriental’s Asian heritage’. According to Mandarin Oriental’s corporate website, included in the restaurant and bar offering will be ‘a lively rooftop sky bar with citywide views, a signature dining experience, an all-day dining venue, a poolside bar and restaurant, a lobby lounge, a club lounge, a cigar room and a Mandarin Oriental Cake Shop’.

After the success of Abu Dhabi EDITION the stylish boutique-style property by Marriott is opening a second UAE hotel in Dubai. Located on Sheikh Zayed Road, Dubai EDITION will have 258 guest rooms, 15 suites and four restaurants, set to be managed by a ‘prestigious chain’. You’ll find it in Downtown Dubai, close to Fountain Street and The Dubai Mall. 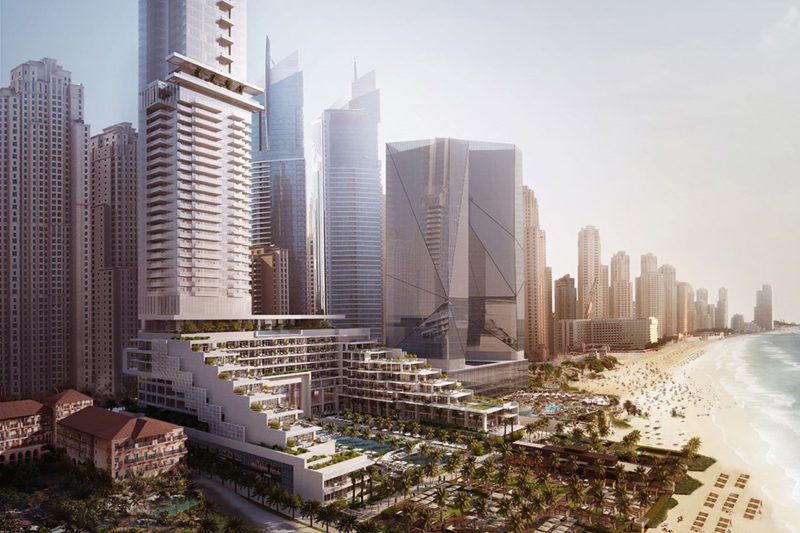 Making its mark on the popular shores of Jumeirah Beach Residence, Corinthia Hotel Meydan Beach is set to be the tallest building in JBR. Located just next door to Rixos Premium, the new property will be home to 360 rooms and suites. There’s a multi-level cascading pool area in the centre court of the hotel, leading down onto the beach.

Staycations
EDITOR’S PICKS
Exclusive Reveal: Topgolf Dubai is here and ready for action
READ MORE
65 of the best outdoor bars and terraces in Dubai
READ MORE
7 brilliant dining deals in Dubai this month
READ MORE
18 of Dubai's most Instagrammable breakfast spots
READ MORE
MOST POPULAR
Abu Dhabi updates road entry requirements - January 2021
Did you feel it? Minor earthquake tremors felt by UAE residents
The stunning Hermès Carré Club is now open in Alserkal Avenue
Pics of the week: Your best photos of the UAE
Watch: A look inside Conor McGregor's Dhs20,000 per night Dubai villa
YOU SHOULD CHECK OUT
Our website uses cookies and other similar technologies to improve our site and your online experience. By continuing to use our website you consent to cookies being used. Read our privacy policy here.