UAE Flag Day is on November 3. Here's what you need to know...

We don’t get a day off for this holiday, but it’s a very important day…

On November 3, the country celebrates UAE Flag Day. It marks the anniversary of HH Sheikh Khalifa bin Zayed Al Nahyan becoming the President of the UAE in 2004.

The national campaign was launched in 2013 by HH Sheikh Mohammed bin Rashid Al Maktoum, Vice President of the UAE and Ruler of Dubai, to honour the country’s past, present and future.

While it is a big cause to celebrate, it isn’t a public holiday – so no days off work, sorry.

ALSO READ: When is the next public holiday in the UAE? Here’s a guide…

What does happen, however, is that the UAE flag displayed proudly all over the country – in shopping malls, people’s houses and cars and so on.

Last year at Kite Beach in 2019, the UAE flags were arranged to form the faces of HH Sheikh Mohammed Bin Rashid Al Maktoum Vice President of the UAE and Ruler of Dubai and HH Sheikh Mohamed bin Zayed Al Nayhan, Crown Prince of Abu Dhabi when viewed from above.

In 2018, the flags were laid out to form the face of Sheikh Khalifa when viewed from above.

How is the UAE celebrating this year?

According to Khaleej Times, a circular was issued by the UAE Government Media Office that stated, ‘authorities said federal and other local entities, including those from the private sector, will raise the flag simultaneously in front of their headquarters at 11am on Tuesday, November 3.’

Rules have also been distributed keeping in mind Covid-19 safety measures and restrictions.

This year, we are yet to receive details as to how the UAE will be celebrating, but we will update you as soon as we know.

In the meantime, do share your snaps of UAE Flag Day with us on November 3 using the hashtag #whatsondubai on social media – we can’t wait to see them.

What do the UAE flag colours mean, anyway? 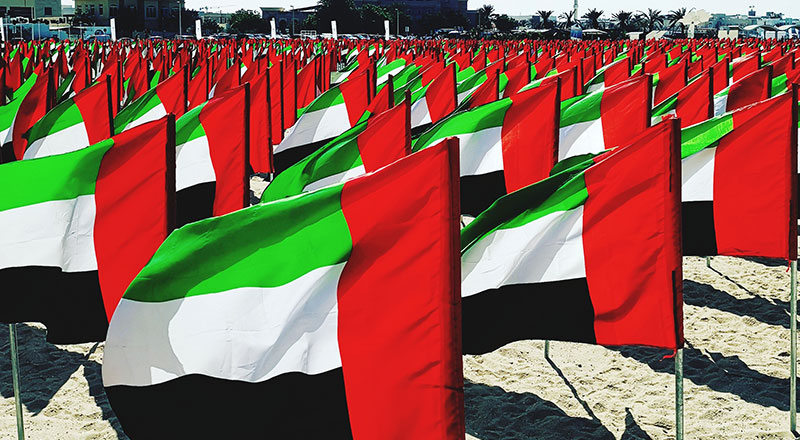 The UAE flag is made up of four colours – red, green, white and black.

According to an official guide: Red symbolises the sacrifices of previous generations who laid the foundations for the union. Green symbolises growth, prosperity and cultural renaissance. White displays the nation’s charitable contributions and support for security and peace in the world. Black reflects the strength of Emiratis and their rejection of injustice and extremism.

Culture
News
EDITOR’S PICKS
Ramadan in Dubai: 50 iftars to try
READ MORE
Where can Dubai residents travel? Check out these 14 destinations
READ MORE
Rumours, facts and reveals: New Abu Dhabi bars and restaurants
READ MORE
UAE announces reduced working hours for Ramadan 2021
READ MORE
MOST POPULAR
A four-day ultra marathon is taking place in the Dubai desert
Put the pedal to the metal with free tickets to Ekart Zabeel
Etihad drops massive summer sale with up to 50 per cent off flights
Spend your summer in a snowy cinema in Dubai
Tipsy Lion reopens with wallet-friendly deals all week
YOU SHOULD CHECK OUT
Our website uses cookies and other similar technologies to improve our site and your online experience. By continuing to use our website you consent to cookies being used. Read our privacy policy here.