Before and after: Stunning photos capture Dubai’s incredible transformation

With the UAE celebrating its golden jubilee this year, What’s On decided to take a look back to see just how much Dubai has changed over the past years.

Below we have showcased popular destinations, major projects, the (ever-changing) Dubai skyline and more backed up with some jaw-dropping before and after shots to show you just how far this city has come to become one of the top destinations in the world to visit.

We’ve also added in a fun must-know fact for each one which you can use to impress your friends.

Here are 9 pretty cool before and after shots of Dubai 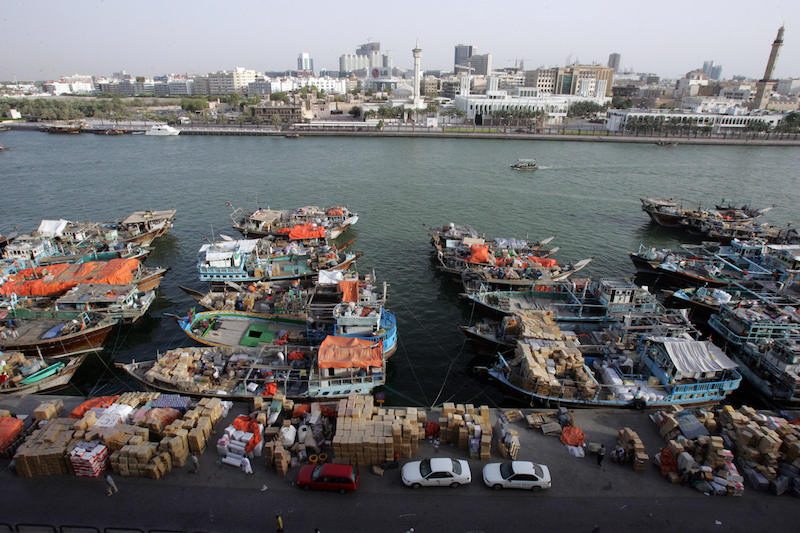 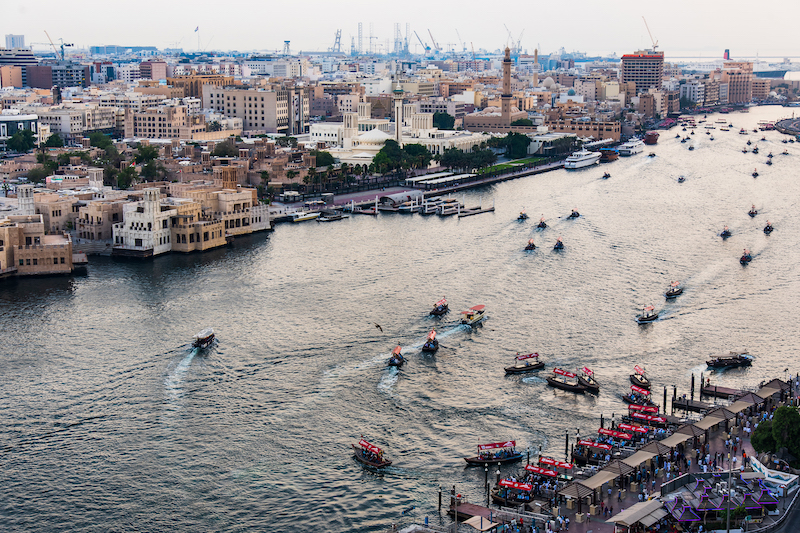 The Dubai creek’s significance can be traced back to 1902, when His Highness Sheikh Maktoum bin Hasher – the ruler of Dubai – abolished all customs duties on imports, essentially creating a free trade zone thus making Dubai became a major trading hub, with much of the activity centred around the creek. Al Seef seen in this after shot is a popular destination to visit, but if you want to take a step back in time, head to Deira across the Dubai Creek via the traditional abra.

Fun fact: Previously (before the 1950s), the Dubai Creek was limited in size and so large vessels couldn’t enter. In the late 1950s and early 1960s, the Creek was dredged to make it wider and deeper. After this, ships of up to 500 tonnes were able to anchor there and Dubai’s trade levels soared. 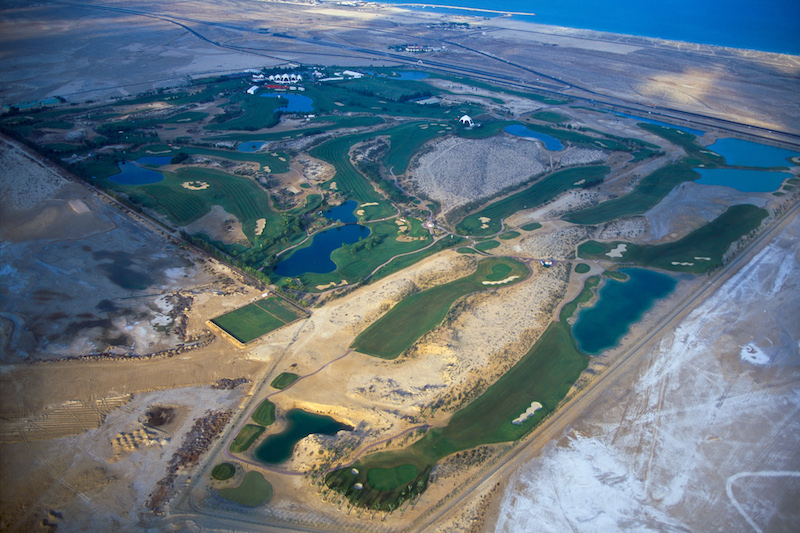 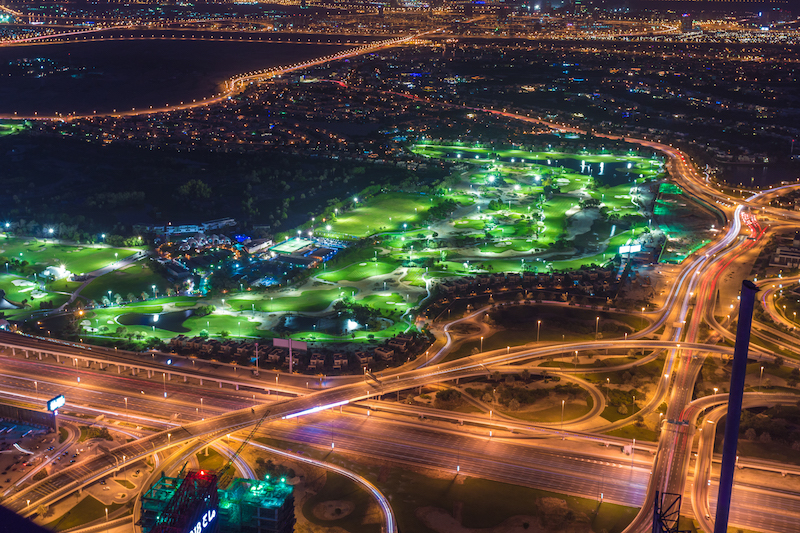 In 1988, the Emirates Golf Club opened its doors. It was the vision of His Highness Sheikh Mohammed bin Rashid al Maktoum and was the region’s first all-grass course. Sheikh Mohammed selected a site in the desert, 25km from the centre of Dubai. As you can see at that time, there were no buildings or construction – only sand dunes and natural fauna and flora. Just take a look at the buildings that surround it now.

Fun fact: Just weeks before the scheduled opening of the club, Dubai was struck with one of the worst storms with four-and-a-half inches of rain falling in a matter of hours. The result? Emirates Golf Club was cut off from the roads due to the flooding, essentially making it an island. 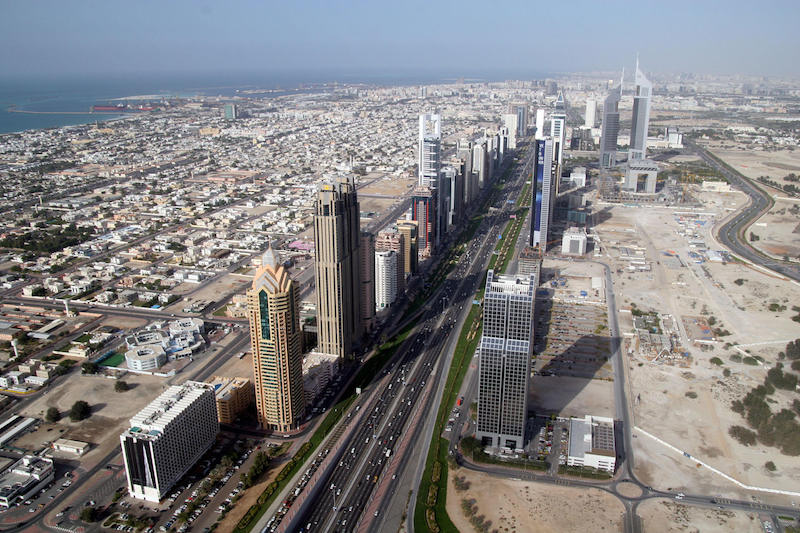 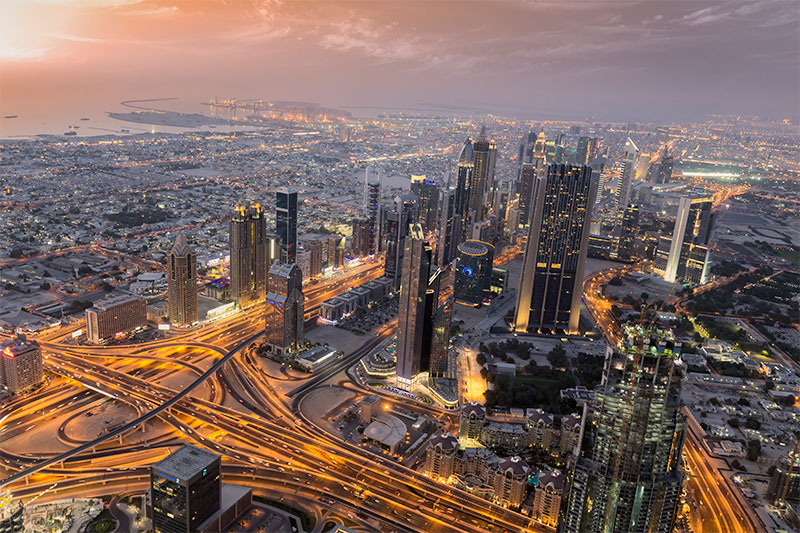 The longest road in the UAE was previously called and was formerly known as Defence Road. It was expanded between 1993 and 1998 and along with the improvement, the road was renamed after the then president of the United Arab Emirates, Sheikh Zayed bin Sultan Al Nahyan. 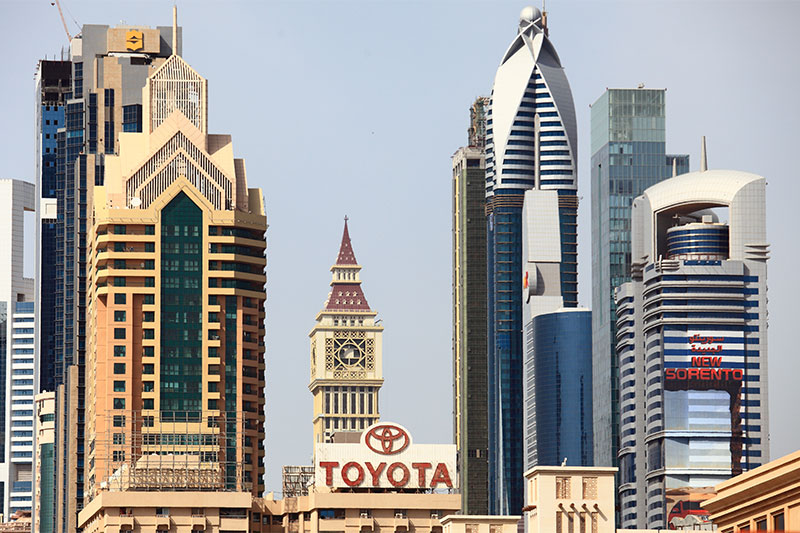 Fun fact: Residents who have called Dubai home for a long time are well aware of the iconic Toyota building. Standing at just 15-story high, it is regarded as the first residential building on Sheikh Zayed Road and has seen Dubai rise from the desert. If you want to know: the real name of the building is Nasser Rashid Lootah Building. Even now, though the iconic Toyota sign has come down, it will always (and forever) be known as the Toyota building. 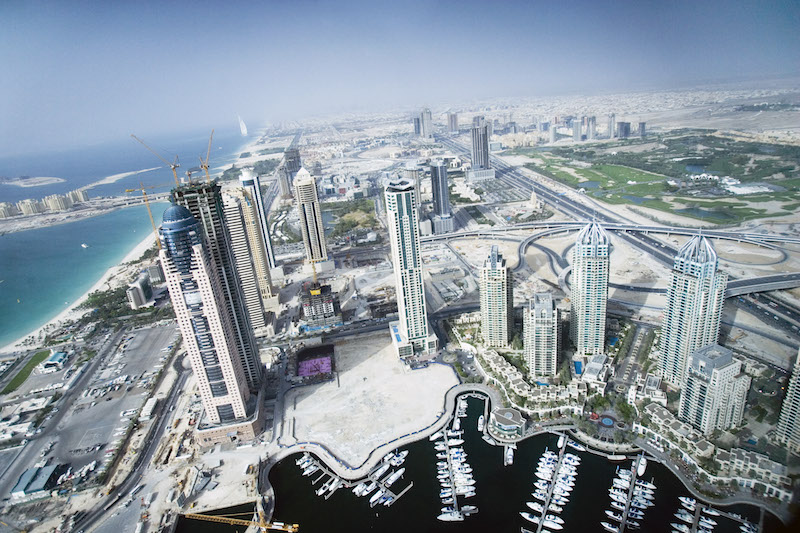 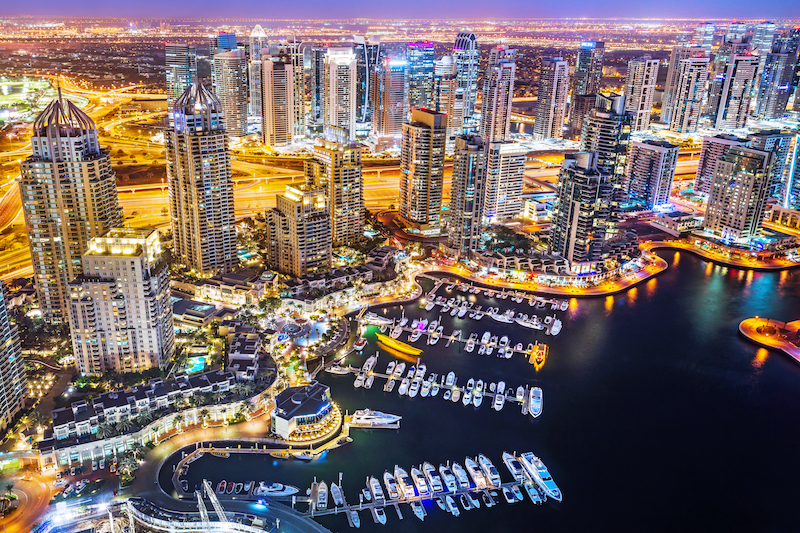 This popular district in Dubai started construction in 2000 and this photo taken in 2007 shows one of the first towers that will become just a part of the iconic Dubai Marina skyline. Now, the district is home to over 200 towers. Wow.

Fun fact: A majestic whale shark was spotted in the Dubai Marina back in 2015. It was said that the shark had lost its way and got lost. Don’t worry, we did hear it eventually made its way out of the Marina waters on its own. 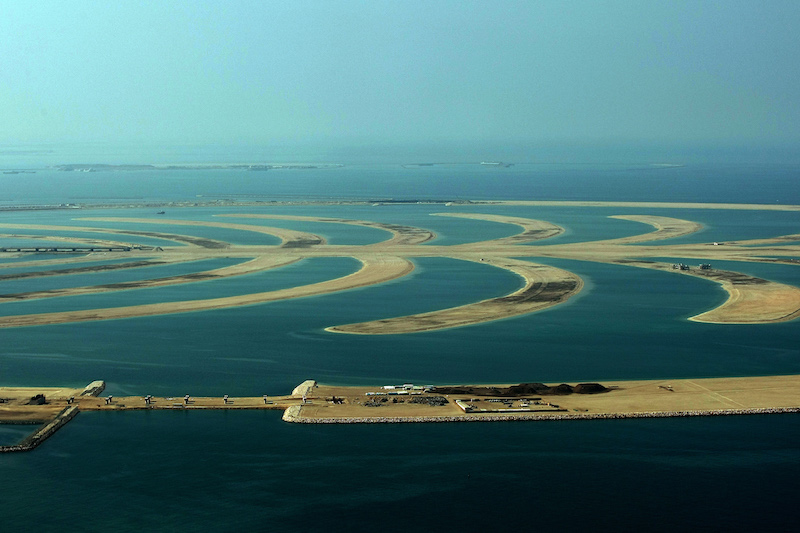 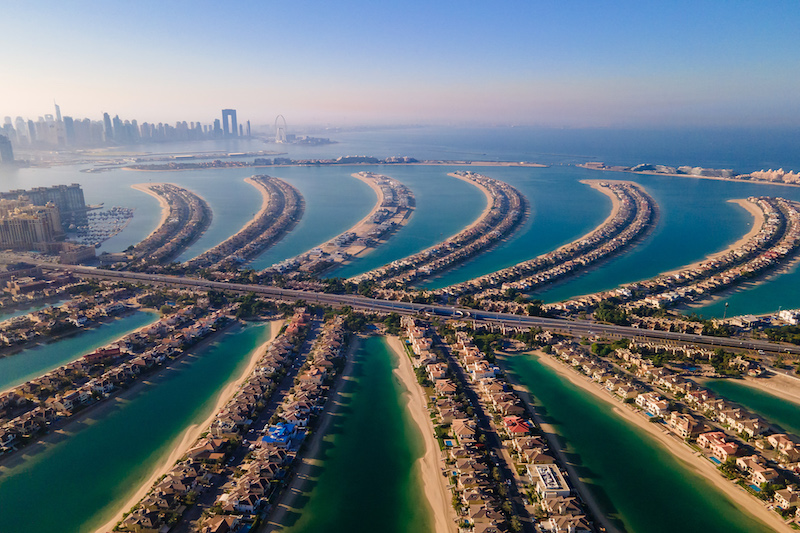 The Palm project began in June 2001 which means it turns 20 this June 2021. The Palm is now home to a number of restaurants, world-class hotels, attractions and over 80,000 people call the island home. The latest attraction to open on Palm Jumeirah is The View at The Palm – a 52-storey high observation deck that gives guests a 360-degree view of Dubai.

Fun fact: You probably already know this, but the Palm Jumeirah is one of the few giant structures that can be seen from space with the naked eye. But, did you also know that the team working on the construction had to depend on satellite-guided technology during the building process? It was that massive. 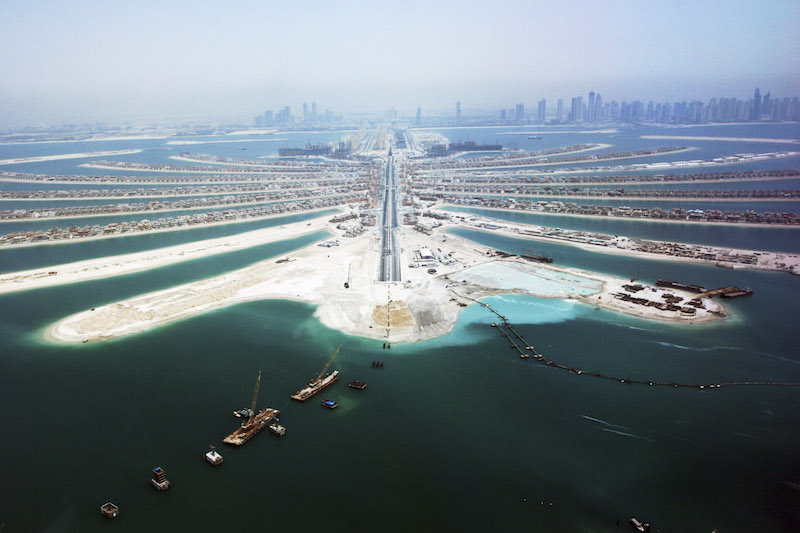 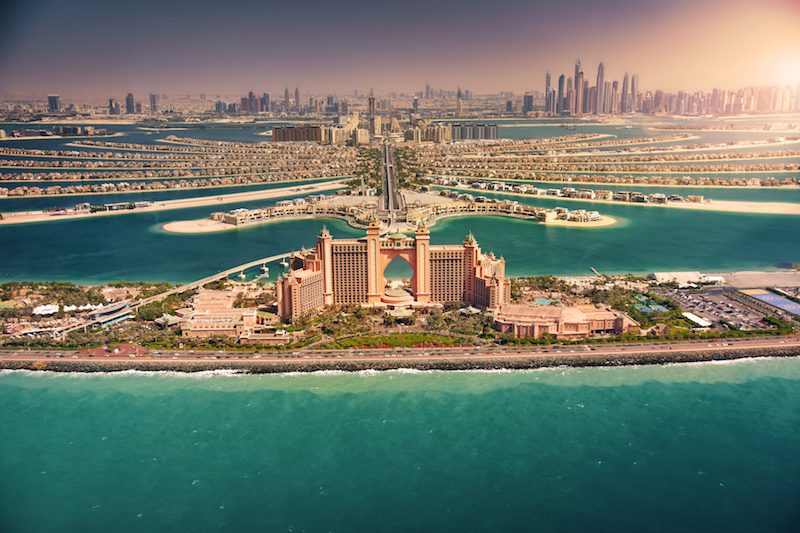 Work on the Palm Jumeirah began in 2001 while construction on the Atlantis the Palm began in 2006 and the hotel opened up just two years later in 2008. It was the first hotel to open on the manmade island.

Fun fact: The largest art canvas in the world was painted in the ballroom-turned-art studio at Atlantis the Palm. The work scaled 17,176.6 square feet and was created by British artist and philanthropist, Sacha Jafri over 28 weeks from March to September 2020. 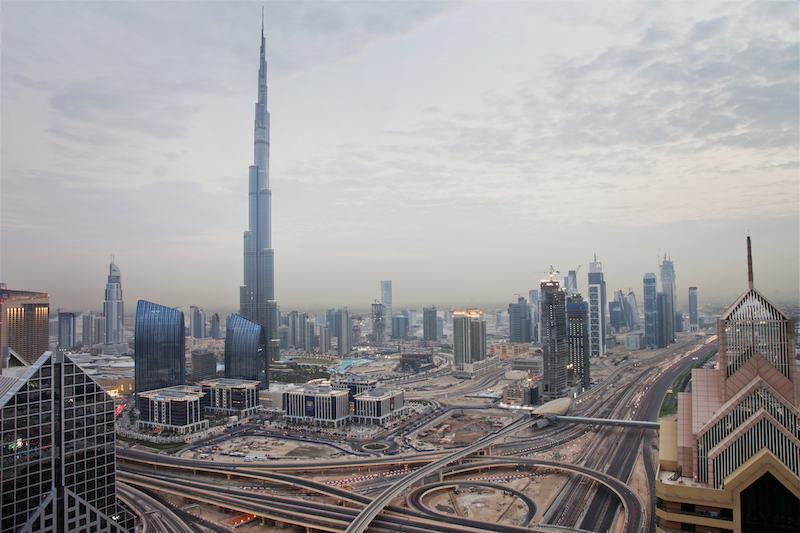 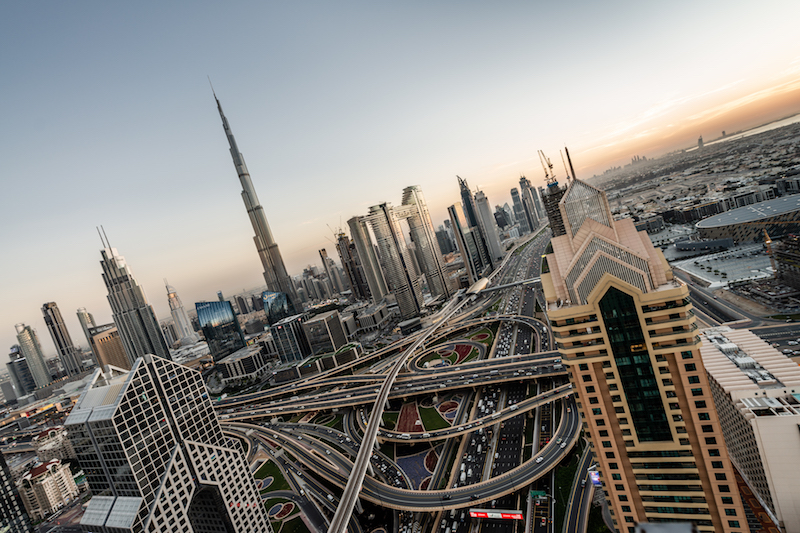 Burj Khalifa was inaugurated on January 4, 2010 and is home to one of Dubai’s most popular attraction – At The Top. When the attraction launched in 2010 it was the highest observation deck in the world offering up breathtaking views of the city. Imagine the difference in the views guests can witness now compared to 11 years ago.

Fun fact: The Burj Khalifa is three times as tall as the Eiffel Tower in Paris and nearly twice as tall as the Empire State Building in New York City. It’s so tall in fact that Muslims fasting during Ramadan have to wait an extra two minutes before they break their fast as they can still see the sun compared to those on terra firma. 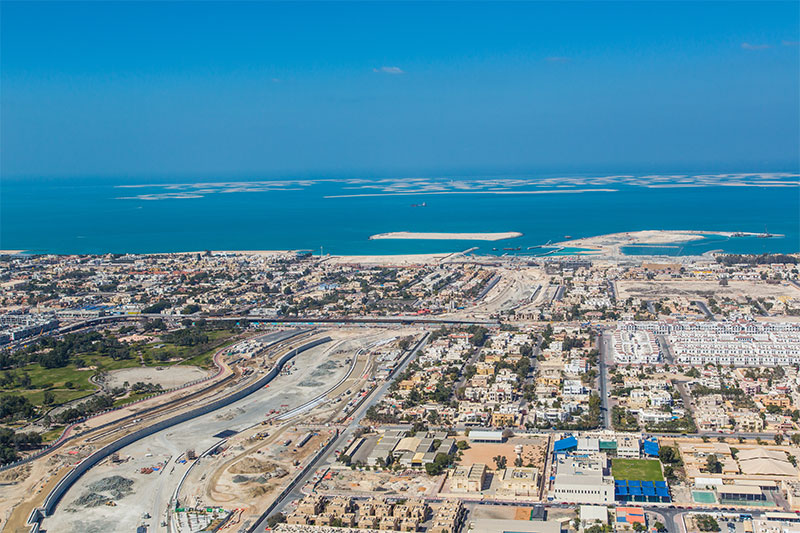 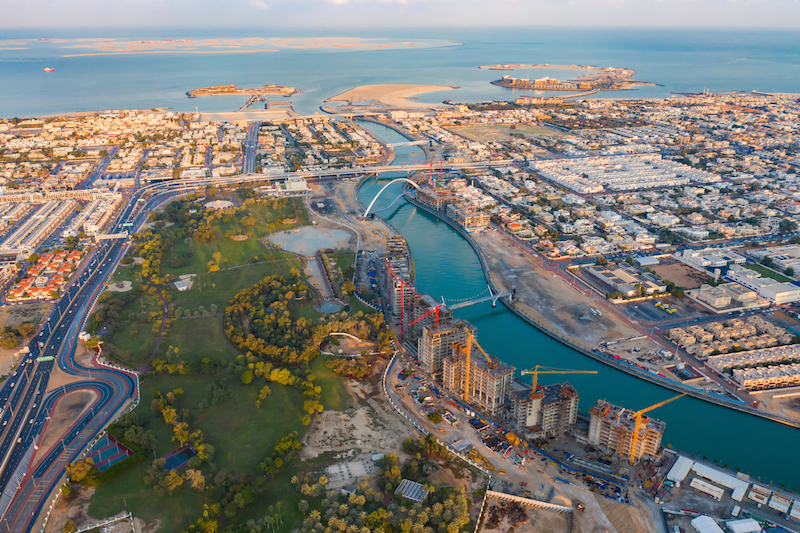 Work on the Dubai Water Canal began in October 2013 and took a little more than three years to complete. The project achieved the dream, initiated by the builder of Dubai the late Sheikh Rashid bin Saeed Al Maktoum, of increasing the depth of Dubai creek in 1959. His Highness Sheikh Mohammed bin Rashid Al Maktoum, made the dream come true with this project which linked the Dubai Creek with the Arabian Gulf across Dubai Water Canal and with the Business Bay at 12 kilometres long.

Fun fact: The 3.2km canal links Business Bay with the Arabian Gulf and has turned areas of Dubai like Satwa, Downtown, Zabeel, Oud Metha, Karama and Bur Dubai into one huge island. 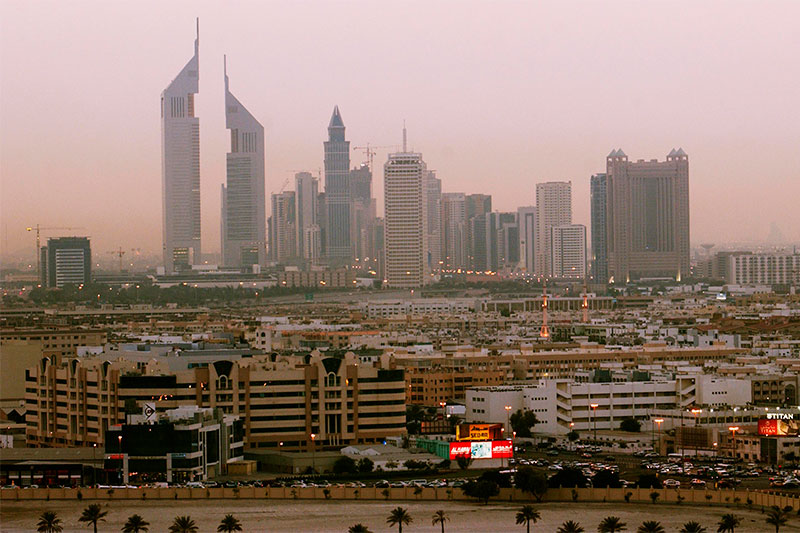 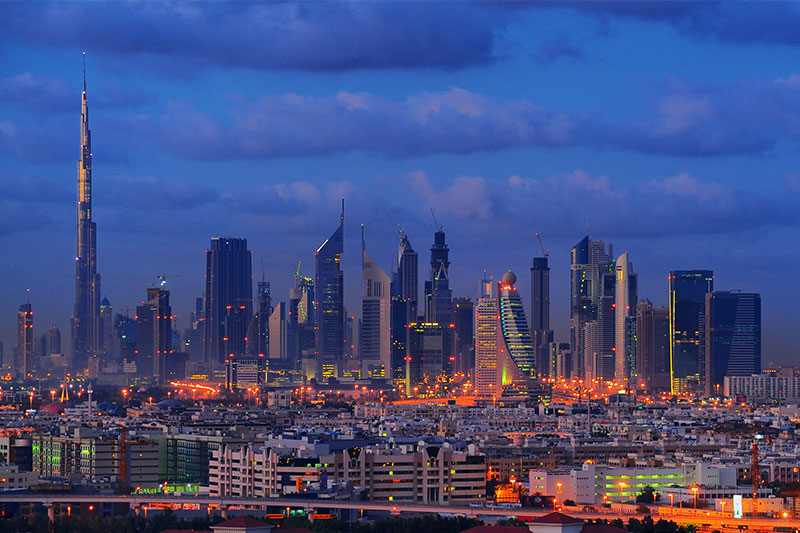 The iconic Dubai skyline is forever changing thanks to the number of new skyscrapers that keep getting added. One thing remains though, it looks mesmerising.

Fun fact: Again, one you probably already know but the Dubai World Trade Centre was once the tallest building in Dubai. The 38-storey tower is a height of 184 metres. It was erected in 1979 and now sits humbly at the start of Sheikh Zayed Road surrounded by looming skyscrapers. In 2000, Emirates Towers took the spot for the tallest building in Dubai and it held the position for nearly eight years followed by Almas Tower for one year and currently, Burj Khalifa.

Images: Getty Images and What’s On

Culture
News
UAE 50
EDITOR’S PICKS
UAE holiday dates announced for Eid Al Adha
READ MORE
Emirates extends suspension of flights from India to UAE again
READ MORE
Coming soon: Everything we know about Ain Dubai so far
READ MORE
Khorfakkan set to open new tourist attraction 580 metres above sea level
READ MORE
MOST POPULAR
It's Dhs350 to brunch, stay and play at the What's On Lock In this weekend
UAE weather: Temps of over 50ºC recorded in the shade yesterday
Get a free Expo 2020 day pass when you fly with Emirates
A popular fairy-tale is gracing the stage at The Theatre at Mall of the Emirates in August
UAE petrol prices will increase again in August 2021
Exclusive interview: John Cena on his role as a 'douchey Captain America'
YOU SHOULD CHECK OUT
Our website uses cookies and other similar technologies to improve our site and your online experience. By continuing to use our website you consent to cookies being used. Read our privacy policy here.