It will highlight UAE’s success story…

To celebrate the 51st UAE National Day, the Central Bank of the UAE (CBUAE) announced the launch of a new Dhs1000 banknote which will be available in the first half of 2023.

This, as we all know by now, was achieved in the successful Emirates Mars Mission “Hope Probe” journey in 2021. It is embodied in the new note with an image of the Hope Probe at the left of the late Sheikh Zayed image. The dream is also reflected in the image of an astronaut added as a security mark that appears on both sides of the banknote. 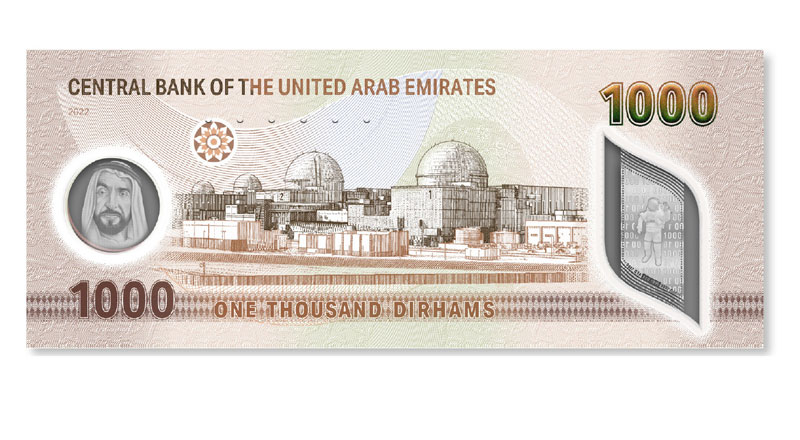 On the other side, The Central Bank highlights another global achievement for the UAE. It features an image of the Barakah Nuclear Energy Plant based in Abu Dhabi. According to WAM, ‘The Plant will play a key role in diversifying energy sources in the country, reduce carbon emissions and hence enable the UAE to advance further in meeting its international obligations in this regard.’

The new Dhs1000 banknote will be the fourth issuance of the National Currency Project. It will be made of polymer, which is more durable than the traditional cotton paper banknotes. It is also more sustainable and falls in line with the CBUAE’s adoption of sustainable practices and growth.

What’s special about this banknote, is that the CBUAE has added prominent symbols in Braille to help blind and visually impaired consumers to identify the banknote’s value.

Khaled Mohamed Balama, Governor of the CBUAE, stated, ‘The issuance of the new AED1000 banknote comes under the vision of UAE’s President His Highness Sheikh Mohamed bin Zayed Al Nahyan, to keep up with the comprehensive development our country is witnessing, and represent UAE’s global achievements and successes, as well as highlight its future ambitions in various sectors.’.

According to WAM, the current Dhs1000 banknote will continue to be in circulation, as a banknote whose value is guaranteed by law.

News
EDITOR’S PICKS
Here's the full list of UAE public holidays in 2023
READ MORE
23 incredible things to look forward to in the UAE in 2023
READ MORE
Hidden gems: 10 UAE desert pop-ups to discover this winter
READ MORE
Where to travel in 2023: 10 new flight routes from the UAE
READ MORE
MOST POPULAR
This beautifully-designed outdoor terrace is a must-visit this winter
A 50,000 year old comet will light up UAE skies this weekend
Treat your loved one to a spectacular evening at Billionaire Dubai
New date announced for Tom Odell's Dubai Opera performance
Ras Al Khaimah Fine Arts Festival returns this weekend
YOU SHOULD CHECK OUT
Our website uses cookies and other similar technologies to improve our site and your online experience. By continuing to use our website you consent to cookies being used. Read our privacy policy here.