If you’re looking to dine at royally approved restaurants, then this is the ultimate guide for you. H.H Sheikh Mohammed bin Rashid Al Maktoum, Vice President of the UAE and Ruler of Dubai is often seen supporting the hospitality industry in his city. These restaurants have all received the royal stamp of approval by Sheikh Mohammed.

Back in September 2022, Sheikh Mohammed visited one of Chef Izu Ani’s much loved restaurants. Alaya posted a video of the Dubai Ruler shaking hands with the popular chef. Alaya’s cuisine is a culinary exploration from the coast of the Orient through to the Mediterranean, combining east and west in an authentic and modern way.

A post shared by The Arts Club Dubai (@theartsclubdubai)

The exclusive members club in DIFC welcomed Sheikh Mohammed when it first opened. The Arts Club has a long history of hosting the world’s most affluent and influential people at its London venue, so it comes as no surprise that the Dubai version appears to be akin. Sheikh Mohammed was said to have dined at the Nikkei restaurant Rōhen. We can only presume Sheikh Mohammed is a VIP member.

Having opened back in January of 2020, CE LA VI has quickly become a hotspot for the perfect Instagrammable location with incredible food created by chef Howard Ko and an even better nightlife scene. The rooftop restaurant shared a snap of Sheikh Mohammed in attendance, coupled with the caption ‘a great honour to welcome him.’

A restaurant famous for its modern and unique Indian cuisine, Farzi Cafe has welcomed Sheikh Mohammed to dine on more than one occasion. In 2017, the restaurant posted on their Instagram a photo of His Highness with the caption ‘we again had the honour of His Highness visit us at Farzi Cafe.’

It’s no secret that the royal family are regular guests of Chef Izu Ani’s restaurants, but one they’ve been spotted at is upscale Grecian restaurant, Gaia. Both Sheikh Mohammed and Sheikh Hamdan have been seen in the restaurant on more than one occasion, dining on array of Chef Izu’s signature dishes. 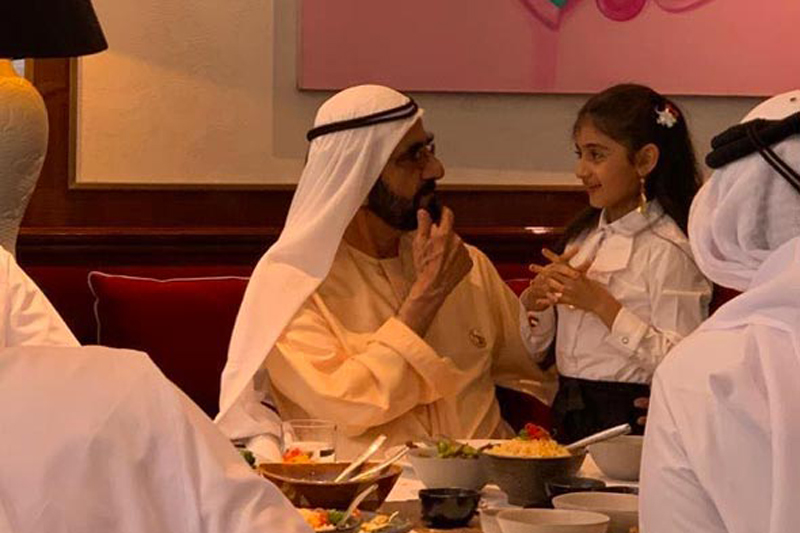 An upscale Asian restaurant inspired by the glamour of 1930s Shanghai, Shanghai Me is split between a luxurious bar and lounge, bamboo-lined terrace and restaurant. On the menu guests can expect a blend of flavours from across East Asia, with a mix of lighter plates and more indulgent dishes designed to suit every taste. Sheikh Mohammed was photographed in the restaurant shortly after the opening, in 2019, sharing a sweet interaction with a little girl who approached him for a photo.

Most recently, Sheikh Mohammed was photographed visiting one of our personal favourites, SushiSamba. SushiSamba posted the photo onto their Instagram saying that it was an honour to welcome His Highness to the restaurant. The Palm restaurant has some of the most incredible views and divine dishes, so it’s no surprise that the Dubai Ruler paid this one a visit.

Best of
Eat & Drink
Royals
EDITOR’S PICKS
Here's the full list of UAE public holidays in 2023
READ MORE
23 incredible things to look forward to in the UAE in 2023
READ MORE
Hidden gems: 10 UAE desert pop-ups to discover this winter
READ MORE
Where to travel in 2023: 10 new flight routes from the UAE
READ MORE
MOST POPULAR
With its unique decor, Dubai's La Nina restaurant evokes tales of distant travels
Reservations are now open for French restaurant Fouquet's Dubai
The colourful Sharjah Light Festival returns next week
Relive those cosy winter moments at Chalet 105 at Twiggy
There are some big road closures in Abu Dhabi this weekend
YOU SHOULD CHECK OUT
Our website uses cookies and other similar technologies to improve our site and your online experience. By continuing to use our website you consent to cookies being used. Read our privacy policy here.