The best Abu Dhabi destinations for meat and dairy dodging…

The science is pretty clear that most of us should be eating less meat. And we’re not judging, the author of this post likely ranks in the 99th percentile for carnivorous consumption. But for our own health, and that of the planet’s, going plant-based — if not exclusively at least a little more often — is usually a good thing.

And what better month to start, than veganuary? These are just some of our top picks, to help you make great vegan choices in Abu Dhabi.

Where to find great vegan food in Abu Dhabi 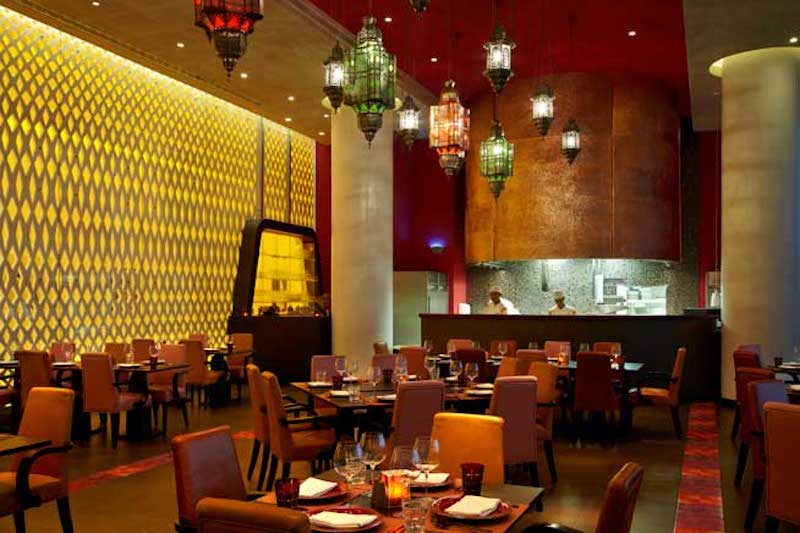 After a lengthy closure, one of the city’s most popular Indian restaurants is back serving up a range of precise-spiced vegetarian alongside their meat-based dishes. South Asian vegan delights include noteable nibbles as vegetable khurchan, bhindi masala, baghare baigan and more. And there’s rice of course. All the rice. 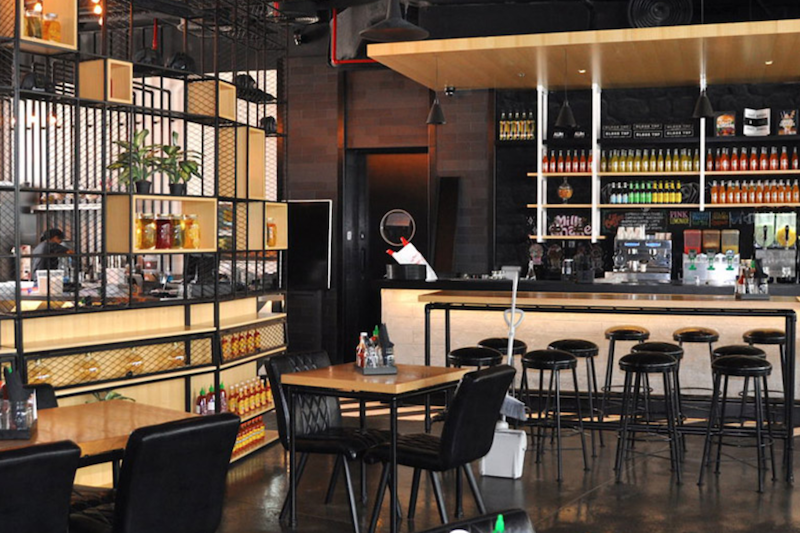 This new branch of the Big Apple burger joint already puts on a bit of a bun show for those in search of plant-based banquets. They offer the genuinely impressive ‘Impossible’ burger (Dhs99), albeit with slightly less vegan friendly accompniaments, and a straight-up vegan burger (Dhs64) which consists of a black bean pattie, vegan mayo, salsa verde, pickled onions on a vegan bun. They’re upping the meat alternative ‘steaks’ this january though with a range of limited edition green foods including — guac and chip platters, Impossible chilli tacos, craft salads, crispy Brussels sprouts, the spectacularly-named vegan truffle shroom burger (Dhs79), and, the dairy-free icing on the cake-infused beverage: A ‘Vegan Black ‘N White CakeShake’. Yummers. 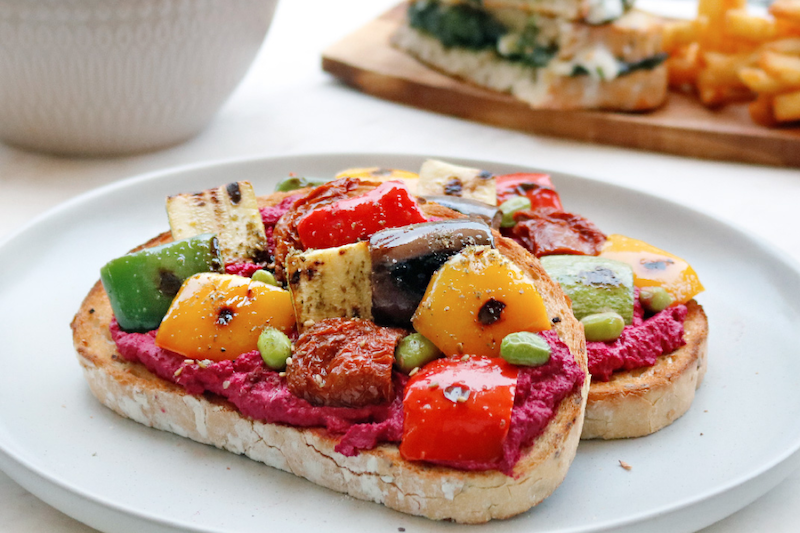 This is one of those delivery only situations, but it is 100 per cent vegan, which means there are no meat or animal products knocking about in the kitchen. They also provide a detailed low down of menu item macros, and which dishes are gluten free. Browse through healthy power bowls (from Dhs31); a banging range of guilt-free burgers (our pick has to be the grilled ‘cheese’ Dhs35); highly artistic breakfasts from Dhs33; mac & cheese alternatives (Dhs29); cauli tacos (Dhs30); vegan pizzas (from Dhs55); and some elite level, planet-friendly desserts (the pecan nut brownie is a steal at Dhs25). Whether you’re more concerned with the price-to-quality balance sheet, or the sheer range of food on offer, this capital outfit is tough to beat.

Deliver through Careem Now, Talabat, Zomato or Deliveroo. Visit bloomvegankitchen.com for the full list of locations.

We do so love a rooftop terrace bar and Aloft Abu Dhabi’s Brick really hits the high notes. Aside from the lofty views, one of the bar’s niche attractions is the flame-baked fare from the brick oven. There’s an entire section of the menu given over to vegan food as well, it includes plant-based versions of chili-cheese baked sweet potato (Dhs65); sprouted lentil shepherd’s pie (Dhs65); vegan bangers and mash (Dhs65); and a fire fresh vegan pizza featuring seasonal vegetables and guilt-free cheese (Dhs65). 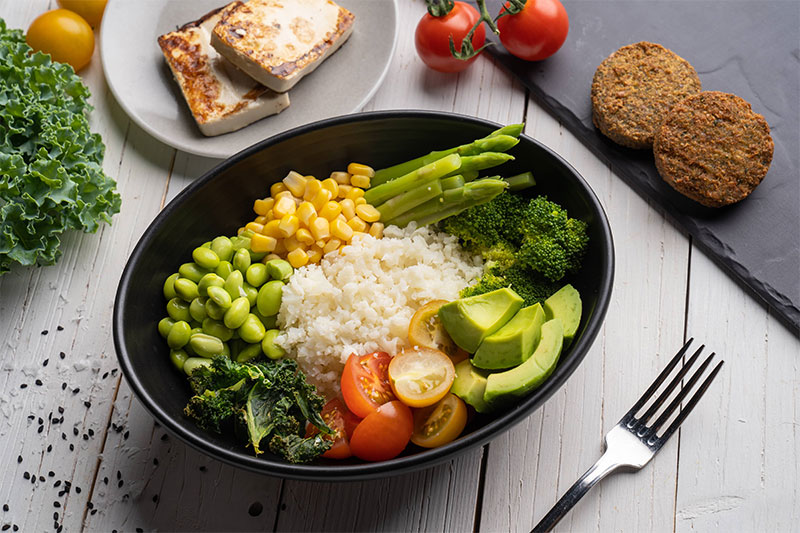 This gastro cafe Has long carried the banner for gourmet vegan food. It’s not exclusively plant-based, but it does have its own vegan breakfast menu, including a responsible interpretation of an English breakfast (Dhs65), foul medames (Dhs32), a tofu benedict (Dhs48) and blueberry rice pancakes (Dhs32); for your plant-based mains you can choose the quinoa, beet and white bean burger (Dhs65), selected salads, a veg thali (Dhs65), and superfood bowls (from Dhs55). 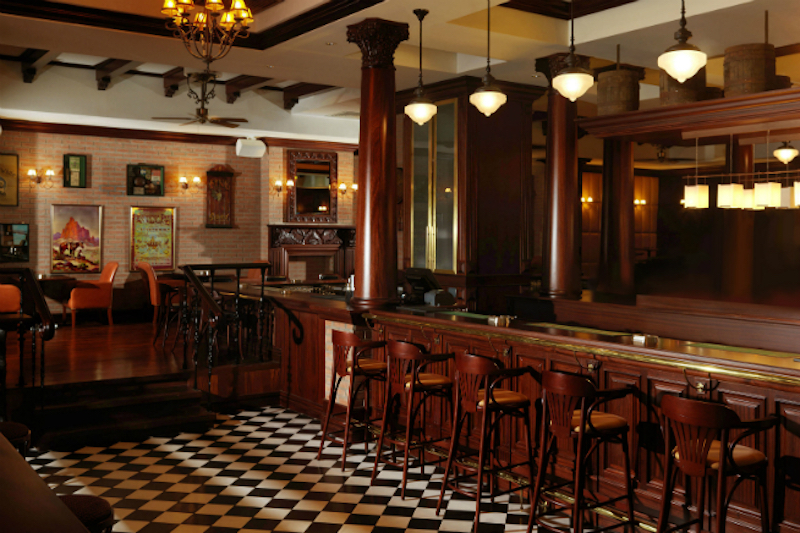 Solid pub grub classics, but make them from food sans faces. This British sports bar is always trying to stay one step ahead of the game, and so perhaps it’s no surprise that you can catch all the matches whilst tucking into items from their dedicated vegan menu page. There’s a vegan burger (Dhs99); vegan Bologainse (Dhs89); a vegan sausage with sweet potato fries (Dhs79); a spicy bean-based Mexican wrap with guac (59); and falafel sliders (Dhs49). 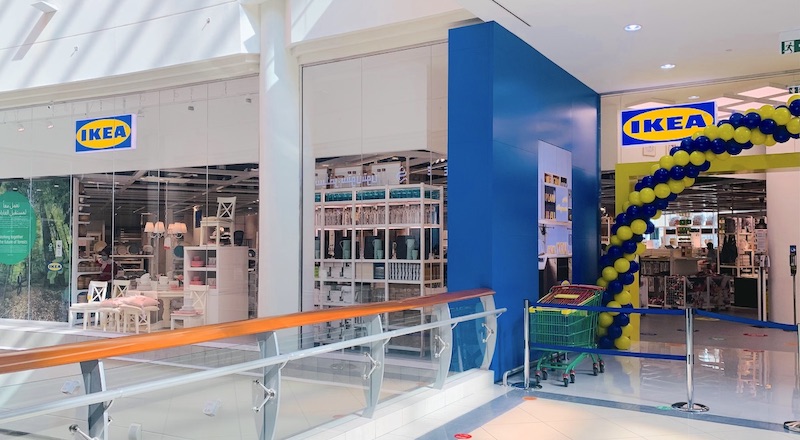 There are now two Ikea stores in Abu Dhabi. The labyrinthian colossus of Yas Island (not the official name), and the more boutiquey city store at Al Wahda Mall. Both now serve the brand’s internet-breaking vegan Swedish meat(less) balls (Dhs9 for eight). There are other vege options too, including breakfast, but… When in an outpost of Stockholm…

At stores across Abu Dhabi. @ikeauae 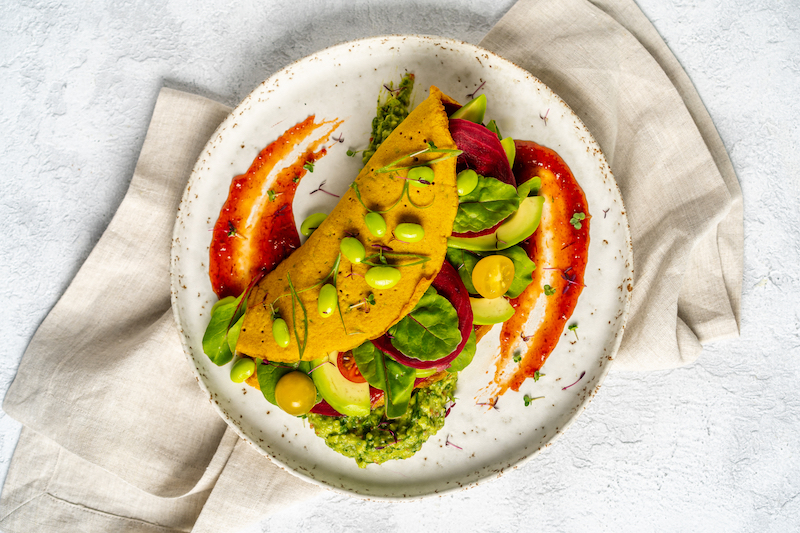 The Aussies are always amongst the early adopters of food trends, and this export from down under has been on that plant-based tip since the jump. Their menu is overflowing with botanical abundance, from breakfast through lunchtime mains, all the way to the dessert section. But fresh for 2022, their new ‘Body and Soul’ menu provides a dedicated home for delicious, nutritious and *flexes bicep* food that’s good for you. This of course includes plenty of vegan options, such as — the plant-based chickpea omelette with local kale and micro herbs, a creamy broad bean and avocado guacamole, marinated beetroot, and a garnish of Jones the Grocer’s Belos tomato and chilli vegan jam.

Find your nearest Jones the Grocer at jonesthegrocer.com 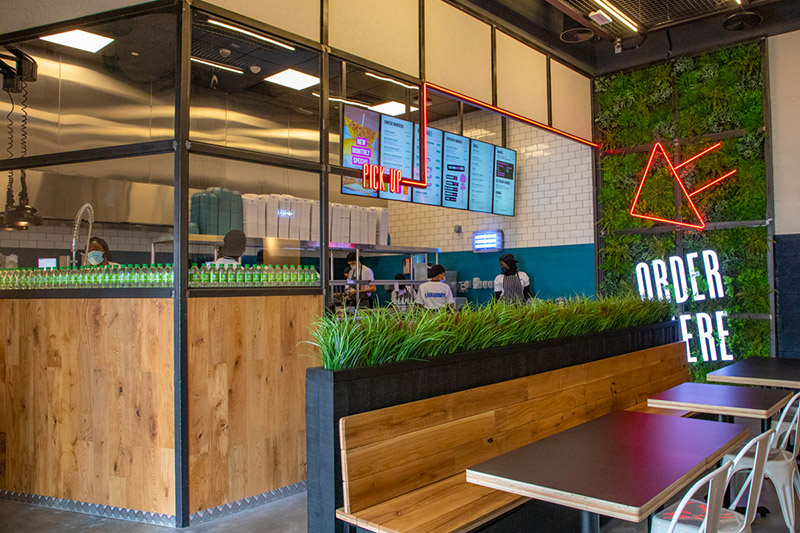 One of our favourite homegrown burger joints, Pickl understands the assignment… not all of us are, ‘about the industry beef’. We tried their Impossible beef burger who offer the option on delivery and dine-in, to replace their classic smashed beef patties with the meat-dodging variety. Also avoiding carbs? You can even swap out those lush potato buns with a lettuce wrap.

From Dhs40. Abu Dhabi locations can be found at Mamsha Al Saadiyat and WTC Mall. @eatpickl 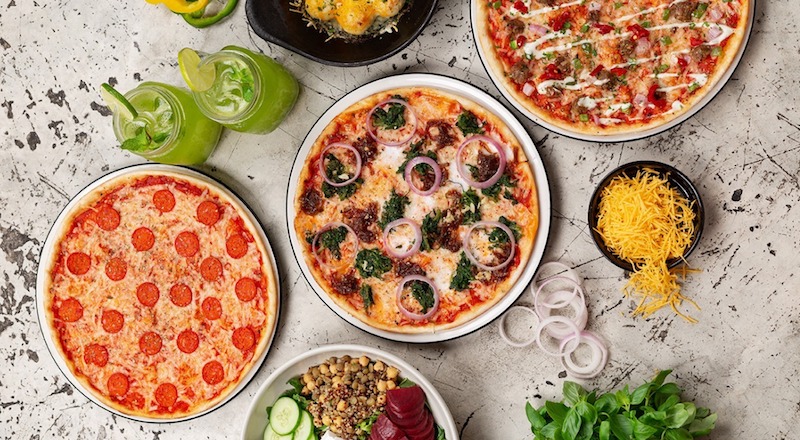 PizzaExpress UAE is 22 this year and, as a gift, they’ve launched 22 brand new completely vegan menu items. These new dishes bolster an already substantial plant-based showing on the menu, and if you’d like a quick kitchen tour around what’s new — hold on to your demonstrably lower levels of cholesterol, we’re about to dive in. There’s pizza of course, but it’s not all about that base — there are options for cruelty-free dining across all the traditional core three courses. You can dip into such face-free-food starters as dough balls al forno or beetroot and feta salad. New meat-free pizza and pasta options include the American Jack vegan cheese and the spicy spaghetti piccante. And then there’s the desserts — put your forks down, and pick those spoons up for a super chill selection of vegan ice creams. 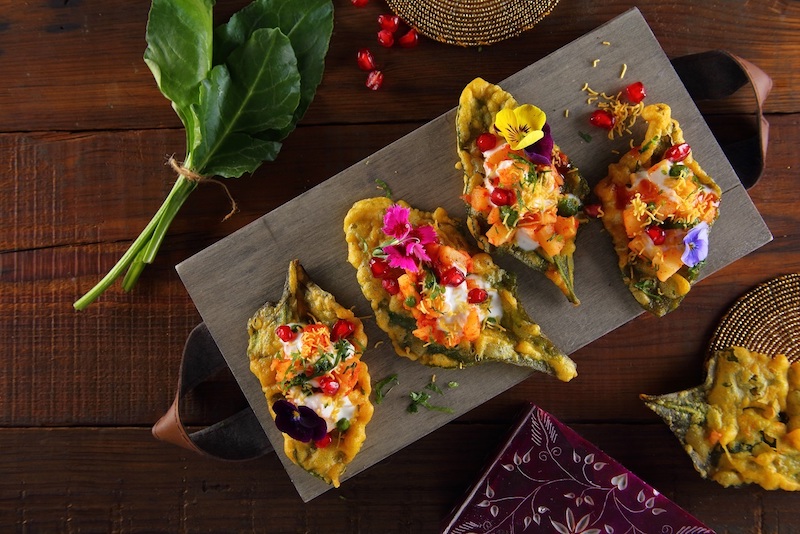 This, now Michelin Guide recognised, Indian restaurant brings a huge amount to the table — and a fair proportion of it, is cruelty free. You’ll find clear indications throughout the menu of which dishes are served as vegan-friendly, and which dishes can be adapted so that they can be prepared as vegan-friendly. That demonstrates a great deal of thought and care, the bonus is that this is also one of the best high end South Asian diners in Abu Dhabi.  We’re big fans of the veg mixed grill (Dhs100), chaat options, and the bhagara baingan (Dhs75). 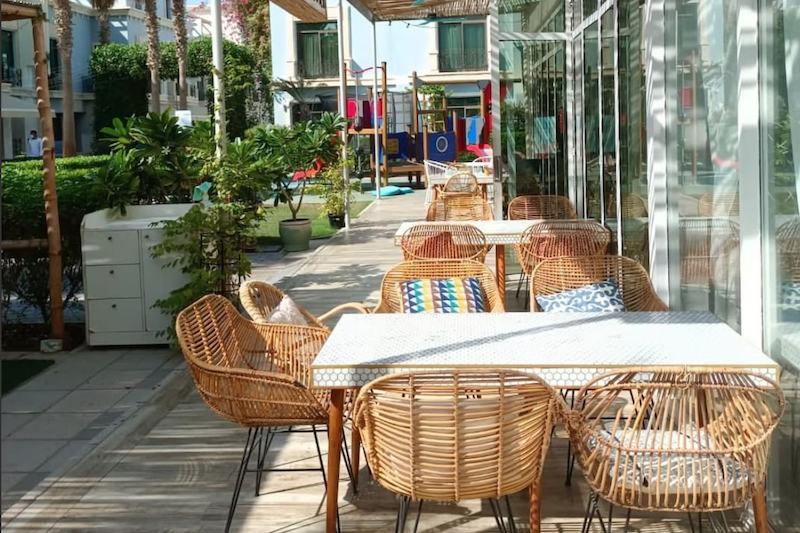 This cafe is UAE-based culinary kingpin Sergio Lopez’s first solo venture in the capital and it’s blessed with that kind of class that goes right down to the marrow. The menu is filled with bright, innovative, devastatingly attractive taste-led experiences and includes a number of meat-free dalliances. Dip into the broccoli and broad bean tabouleh (Dhs45), vegan quesadilla (Dhs45), their vegan take on a hot dog (Dhs57), and the epic mushroom burger with truffle tofu mayo, served with sweet potato fries (Dhs65). 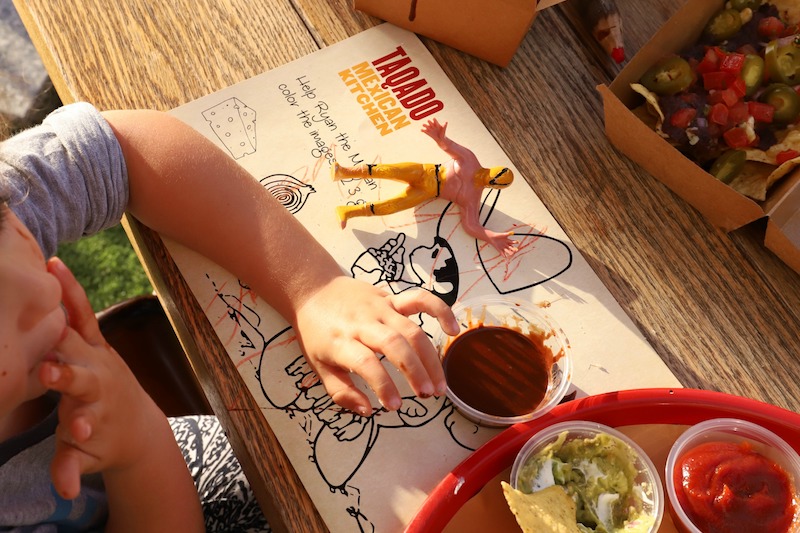 One of our favourite lunchtime orders — the Cali-Mexi Latin fuego hub scores huge plant-based points for its Impossible Burrito (Dhs48). Within the warm carby embrace of the flour tortilla, you’ll find a tasty twist on the standard meat substitute, Impossible’s beef-flavoured chorizo. Ay ay ay. Alongside that, there’s vegan cheese, onion chipotle, lime rice, pinto beans and your choice of salsa. There are also burrito bowls, loaded nachos, quesadillas, salads, breakfasts and desserts that are also tailored to the animal product-free way of life.

Find your nearest outlet on taqado.com 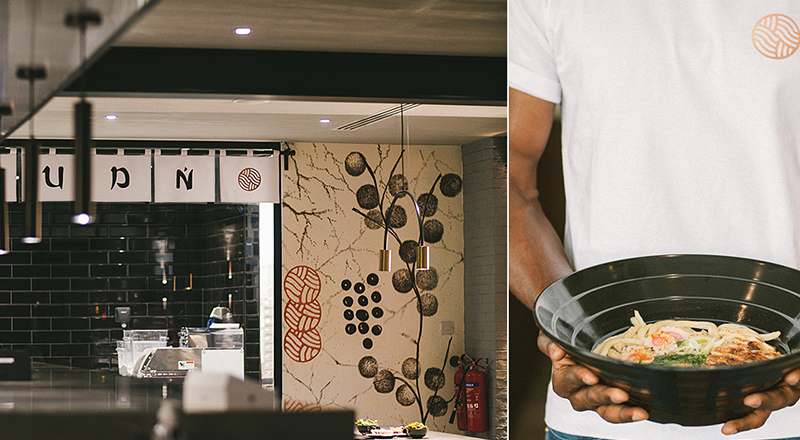 Yeah, yeah, ramen is great. And we’re not telling you not to eat ramen. What we’re telling you to do is to also eat ramen’s thicker, wheat-flour noodle cousin udon. And one delightful place to do just that is at UDN, the brand new udon house in Abu Dhabi. There are a few guilt-free delights to wrap your chopsticks around, including the vegan gyoza (Dhs35), and as you’d expect a number of very-much-solicited vegan noods, udon dishes that include — plain (Dhs42), aubergine (Dhs55), and mixed mushroom (Dhs61). 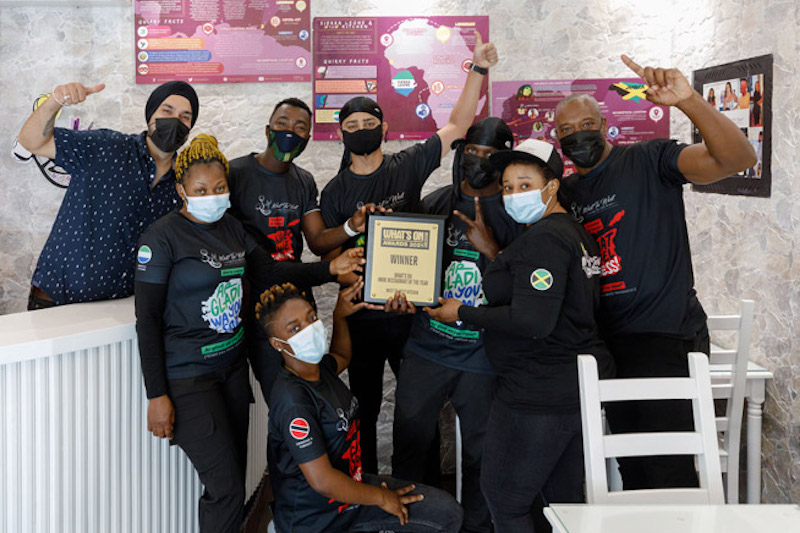 As part of their commitment to providing tasty plant-based alternatives, this What’s On Award Winning Caribbean-and-West-African restaurant recently added Beyond Meat Jamaican patties (Dhs30 for two) to their meat-free menu. These dainty pastries are packing all that same heat, just with zero meat. These brand new vegan bangers join a growing collection of vegan-friendly dishes on the menu such as awojoh binch (a Sierra Leonean bean casserole); Trini’s doubles (curried chickpeas on a soft flat bread); plantains; vegetable groundnut stew; and dhalpuri roti ( a Trinidadian version of the classic Indian streetfood dish). Want more? These guys enthusiastically celebrate meat-free Mondays.

Wild and the Moon

This healthy eating restaurant is a shining example of how the healthiest food can also be the most delicious. Locally sourced, organic, zero plastic and 100 per cent ingenious plant-based offerings, it’s always been a winner in our eyes. Try the wild truffle pizza (Dhs35) and thank us later.