The World Cup is coming to Dubai! Well, the trophy is at least, and you can see it

With the draw made and the World Cup a mere six months away, the excitement is cranking up a notch with every passing day. To celebrate this, Coca-Cola is bringing the the most iconic symbol in sport to Dubai so you can follow in the footsteps of legends and get up close and personal with the trophy.

As part of the FIFA World Cup Trophy Tour by Coca-Cola, the public will be able to have their photo taken with the solid gold trophy at Dubai’s Burj Plaza from 5pm on December 15. 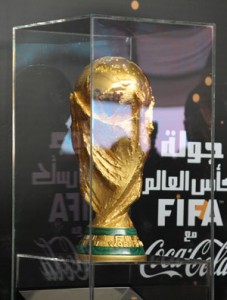 This is the third time the trophy has embarked on a worldwide tour prior to sport’s biggest spectacle, having done so before the finals in Germany in 2006 and South Africa in 2010. On this next installment  Coca-Cola will take it through 90 countries (50 of which have not previously been involved) on a journey spanning 92,000 miles during its nine-month adventure before finishing in Brazil in time for the kick off on Thursday June 12.

The tour was officially launched in Brazil on September 12, before visiting the Pacific Islands, Central America, the Caribbean and Middle East. Following its visit to UAE, the trophy will move on to Europe and South America.

The event at Burj Plaza will be ticket only and will also include the ultimate football experience as well as look back to the history and magic of the World Cup.

In a statement, FIFA Ambassador Gabriel Calderon, former Argentinian international said: “The FIFA World Cup Trophy is a symbol of sporting prowess, bringing great nations together to celebrate the beautiful game. I am excited to be a part of the excitement of the FIFA World Cup Trophy Tour and look forward to being in the United Arab Emirates to witness the delight of football fans here.”

A spokesman for Coca-Cola Middle East, added: “Coca-Cola shares the passion that fans have for football around the world and through our partnership with FIFA we champion the power of football to bring the world together. We are thrilled to be able to bring the most coveted prize in world football to the Middle East, for what we are sure will be a memorable experience for thousands of fans.”

For more information on the tour and how to get involved yourself, visit fifa.com/trophytour, the official Facebook page facebook.com/trophytour

News
Things to do
EDITOR’S PICKS
Ain Dubai will open with fireworks, live music and a drone show
READ MORE
Incredible Aura SkyPool to open in Palm Tower this November
READ MORE
Brit Grand Slam hero Emma Raducanu confirmed for Mubadala Tennis
READ MORE
What’s On Nightlife Awards 2021: Here are the nominees...
READ MORE
MOST POPULAR
Win! Tickets to the UAE Vine Festival worth Dhs1,190
10 wine tasting experiences to look out for at the UAE Vine Festival
Nancy Ajram and Ragheb Alama are performing at Expo 2020 Dubai in November
Miami Beach-inspired luxury resort Th8 Palm is opening in November
Watch your next film under the stars as outdoor cinemas return to Dubai
YOU SHOULD CHECK OUT
Our website uses cookies and other similar technologies to improve our site and your online experience. By continuing to use our website you consent to cookies being used. Read our privacy policy here.