Welcome back! We profile legend Carl Cox before his Dubai show

There can be few things as synonymous with electronic music as the sight of Carl Cox’s well built frame bouncing about behind the decks; that characteristic gap in his teeth enveloped in an ear to ear smile as the electronic overlord bangs out the beats.

He’s been doing it now since the ’80s when he was, initially, spinning rare groove, soul and hip-hop. Then came the release of Phuture’s legendary Acid Trax and Carl’s head was immediately buried deep in acid, hardcore and rave. Ever since then, never has he looked anything less than thoroughly enthused wherever, or whatever, he is playing.

If you ever get the chance to chat to the man you’ll be bowled over by his breezy willingness. He is as chatty and buzzy as you would expect of someone who has spent his life energising dancefloors and clubbers around the world. Now based between the UK and Australia, he has been there at the birth and re-birth of many different sounds from techno to electro and back again, whilst he himself was actually born in Barbados in 1962 before growing up in Oldham in the UK.

It was in his early twenties that the affectionately named Coxy got the electronic bug, and before long he was playing mega-raves like Fantazia, Dreamscape, NASA and Amnesia House, banging out increasingly hard edged techno sounds to writhing masses, often in muddy fields. Before long that scene died away but Carl moved on, playing equally vital and historical UK clubs like the Haçienda, Shelley’s, Heaven and Danny Rampling’s pioneering Shoom. One of his own early endeavours was running Ultimate Base at the now defunct Velvet Underground on London’s Charing Cross Road in the mid to late ’90s, and that desire to be in charge of the whole night from start to finish is something that stays with him to this day in the form of his much loved Ibiza party, The Revolution. 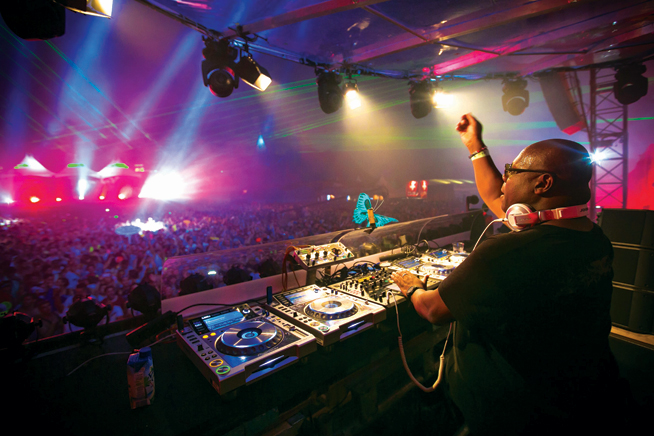 For 13 years now Carl has hosted The Revolution at Space Ibiza every Tuesday, always playing himself as well as inviting an across the board selection of big names to play alongside him. The night has proven such a poplar brand it has even spawned mix CDs and tour events around the world under the same name. The sub-title for the event in 2014 is Music Is Revolution, and his own career has certainly been full of those.

Production-wise, Carl’s earliest forays were seriously dusty breakbeat affairs with cut up and sliced vocal samples, rave horns, strobe lit snares and rib tickling bass hits. That was back in 1991, and just a few years later came the first of many full-length albums. In fact, for a genre that is so focused on the quick and often disposable impact of singles, Carl has proved something of an album specialist, because he is currently on his sixth effort (not to mention the 40-plus official DJ mixes he has compiled in his time).

As time has gone on, so Carl has evolved: the mid to late ’90s saw him touch on a shiny, uplifting progressive house and occasionally trance inducing sound that was perfect for the massive superclubs that came along at the same time. He played just about every one of them during the ensuing decade but most recently he has moved onto a more punchy and immediate tech house sound that gets you right in the gut.

Crafted with years of DJ experience in mind, countless labels have released Carl’s music, but it is his own Intec that stands head and shoulders above them all. Originally started at the turn of the millennium, the label’s remit was as wide and deep as Carl’s own record bags: Deetron, Oxia, Marco Bailey and Ben Sims all featured, but then in 2007 the label went on hiatus. It wasn’t until 2010 that it got revived (as Intec Digital) and arguably came back bigger and better than ever with a wealth of new music from Circus man Yousef (with whom he plays here in Dubai on Friday), techno heiress Nicole Moudaber and Cadenza associate Robert Babicz. 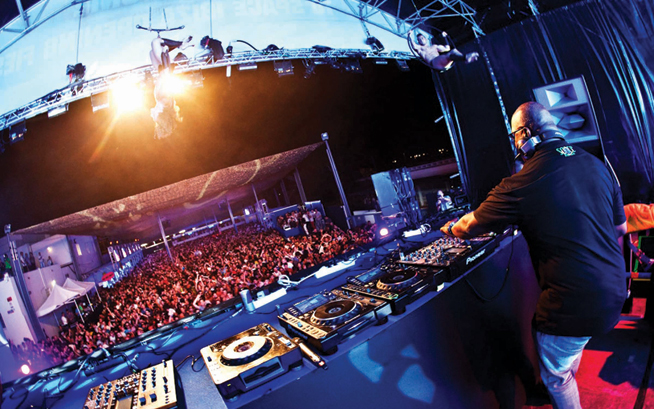 Nowadays, despite increasing competition from EDM big-wigs, Carl Cox is still one of the biggest names in the game: it’s nearly impossible to find any large festival that doesn’t have a stage curated by the man himself, and of course his globally syndicated radio show is now more than 500 episodes strong with reportedly 16 million listeners worldwide.

Another feature on the man’s hit list is the Burning Man festival in America’s Nevada Desert. It’s a pseudo-utopian affair where people barter goods instead of using money, art installations grow up out of the desert and people ride about the vast plains on push bikes with face masks on to keep the howling sands out of their every orifice. It was there in 2008 that Cox had something of an epiphany playing the Opulent Temple stage. “The things that I experienced there, the things that I saw, the people I met, how I felt about it when I left, it gave me another purpose to live,” he said at the time, and soon after released his ode to the place in the form of a mix CD for Global Underground entitled Black Rock Desert.

He’s been back regularly since, despite the fact that no DJs are paid for their services. What might deter others certainly hasn’t deterred Carl though, and this year he’s going one huge step further – creating his own Burning Man sound stage at his own expense.

Away from music, Carl’s main fascination is with motorbikes. As such, he decided to start an annual trek from the north of France right down to Ibiza (and back) ahead of his opening Space date with a crew of like-minded motor and techno heads. Growing ever more successful each and every year, Carl has now invested in a racing team, set up his own bike touring company and feels his music is benefitting as a result.

“Sometimes I just need space away from music,” he said recently. “To not think about drums and basslines. Riding allows you to be free from the music and I feel a lot better for it. Once the DJing finishes I’ll be restoring bikes, I think. That won’t happen for a while though; I’m still ringing off the chain. Every gig in the last year has been amazing and the Space closing was mental. How do you stop that?!”

FACTS AND FIGURES
– Ever the gent, Carl spun a special set for hearing-impaired students at the Swiss Cottage School For Deaf Children in London in 1998.
– He has had radio shows on the UK’s Kiss FM and was a monthly live, global resident for BBC Radio 1’s Essential Mix in 1998–1999.
– His F.A.C.T. album sold more than 250,000 copies worldwide.
– Despite a list of DJ accolades as long as your arm, Carl’s finest was arguably on New Year’s Eve at the turn of the millennium when he managed to see the New Year in twice by flying back across time zones.
– Carl has his own stage every year at Ultra Music Festival, Tomorrowland and Electric Daisy Carnival called Carl Cox And Friends.
– Named DJ Of The Year by the International Dance Music Awards in 1995 and 1996, Carl is regularly in DJ Magazine’s Top 100 DJs.
– He cites his favourite DJs as Laurent Garnier, Richie Hawtin and Jeff Mills.

For more from our friends at Hype, visit their Facebook page.

Nightlife
EDITOR’S PICKS
Ramadan in Dubai: 50 iftars to try
READ MORE
Where can Dubai residents travel? Check out these 14 destinations
READ MORE
Rumours, facts and reveals: New Abu Dhabi bars and restaurants
READ MORE
UAE announces reduced working hours for Ramadan 2021
READ MORE
MOST POPULAR
There's a 30 per cent sale taking place during the long weekend on LegalHomeDelivery.com
Pics of the week: Your best photos of the UAE
Here's why you need to visit Mimi Kakushi's new Friday lunch
New films to watch in cinemas this week: May 13 to 19
Torno Subito's new lunch menu offers a quick mid-week vacation
YOU SHOULD CHECK OUT
Our website uses cookies and other similar technologies to improve our site and your online experience. By continuing to use our website you consent to cookies being used. Read our privacy policy here.