Abu Dhabi Science Festival
The fourth Abu Dhabi Science Festival takes place and events will be held in three locations: one on the Corniche, one at Al Ain Zoo and the final venue takes the festival UAE-wide and is based on the Al Majaz Waterfront in Sharjah. Aimed at kids aged five to 15, the festival has had more than 370,000 visitors since it launched back in 2011 and gives your nippers to learn about science and technology in a fun, relaxed environment. 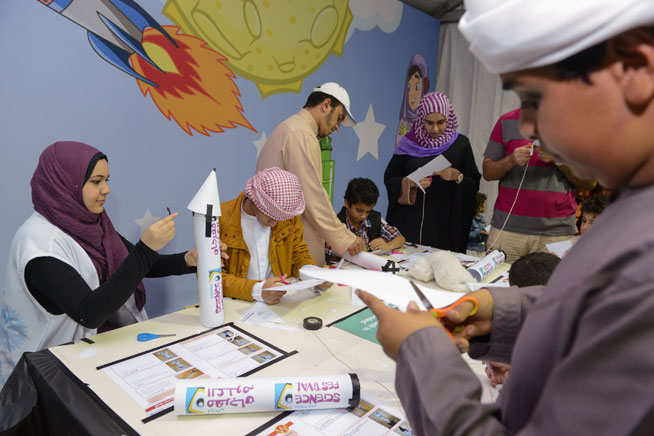 Try truffles at Marco’s
Truffles are big business at this time of year and one of the many restaurants in the capital featuring them on their menu during November is Marco Pierre White’s Steakhouse & Grill. The celebrity-owned diner is holding a White Truffle Dinner on November 13 and will pair dishes made with white truffles from the Piedmont region in Italy with wines from the area as well. The rarity of white truffles and fluctuating market prices means Marco’s has yet to decide how much you’ll have to pay for the evening, but expect to fork out in the region of Dhs1,250 to 2,000 per person for a night the hotel is calling one of it’s ‘flagship’ events of the season.

Check out Fluid Dynamics on Yas
Art and science might seem like unusual bedfellows, but the two worlds collide perfectly this month at Yas Viceroy as part of Swiss Art Gate’s series of exhibitions called Crossroads. The latest, #17, is on display at the hotel and features the work of Fabian Oefner. A Swiss artist, his exhibition Fluid Dynamics, features brilliant splashes of colours created by using centrifugal force (the apparent force that draws a rotating body away from the center of rotation) and opposing chemical compounds (such as oil on water) and perfectly timed flash photography to capture the moment paint splatters onto a canvas. The results are complex and colourful.

Saadiyat Beach Club launch party
The Monte-Carlo Beach Club has gone through a bit of a rebranding and is now known as Saadiyat Beach Club. And tonight the club is celebrating by having a party, featuring capoeira dancers, a photobooth and some high-profile DJs including ROM1, the resident DJ of Nikki Beach in St Tropez, Lebanese decks guru maDJam (a regular at Skybar and White Dubai) and Audio Tonic’s Mr Mr. 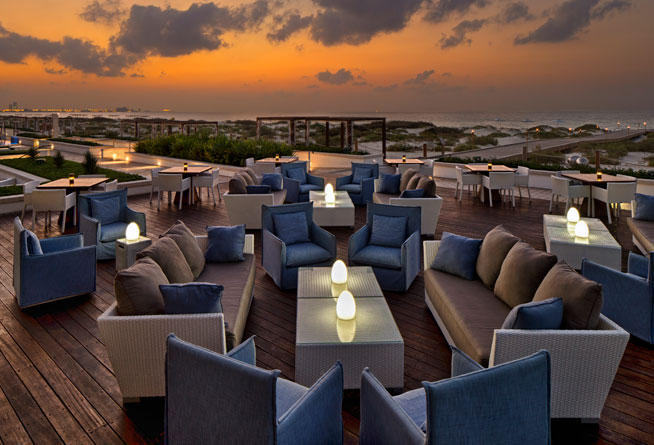 Try Mary’s brunch at the St Regis Abu Dhabi
Here’s a bit of St Regis trivia for you. The Bloody Mary cocktail was originally created in The St Regis New York King Cole Bar 80 years ago. And the name was deemed so racy it was called a Red Snapper instead. Now St Regis Abu Dhabi has decided to honour this event by creating a brunch in its honour. Gary Rhode’s restaurant 44 is no longer at the hotel, and this new version, called the Bloody Mary Brunch, is held in the same location, which is now known as The Terrace at the Corniche. Pay for your Friday feast here and you can get post-brunch access to the hotel’s Nation Riviera Beach Club for a reduced rate of Dhs100.

Yoga in a hammam at the Eastern Mangroves
Yoga and steam rooms: they both offer plenty of health benefits, including reducing stress, releasing endorphins and increasing circulation. And this month you can try both together at the Eastern Mangroves Hotel & Spa by Anantara. Let’s Go Yoga is holding a session in the hotel’s hammam, a traditional, communal steam bath popular in both Turkey and Morocco. Expect 40C heat to help you detox, build muscular strength and gain more flexibility.

Balearic flavours at Nahaam
The poolside restaurant at Jumeirah at Etihad Towers is embracing Spanish cuisine this month. Nahaam is hosting two chefs from the Jumeirah Port Soller Hotel & Spa, situated in the fishing village of Port Sollar in Mallorca. Chefs Ignacio Moreno and Patricia Dios are in town for a week, and will be preparing a selection of tapas dishes and will also have their own cooking station serving paellas at Nahaam’s Friday brunch on November 14.

Check out Seeing Through Light
Guggenheim Abu Dhabi isn’t expected to open until 2017 but if you want to catch a glimpse of what to expect when it does, head to Manarat Al Saadiyat this month. The pre-opening exhibition Seeing Through Light: Selections From The Guggenheim Abu Dhabi Collection, will feature 16 pieces of art including two loans from the Solomon R. Guggenheim Museum in New York. The pieces are displayed in chronological order, starting in the 1960s, and cover five themes: Activated, Celestial, Perceptual, Reflected, and Transcendent. Artists featured include Angela Bulloch, Monir Shahroudy Farmanfarmaian, Robert Irwin, Y.Z. Kami, Bharti Kher, Rachid Koraïchi, Yayoi Kusama, Otto Piene, and Douglas Wheeler. 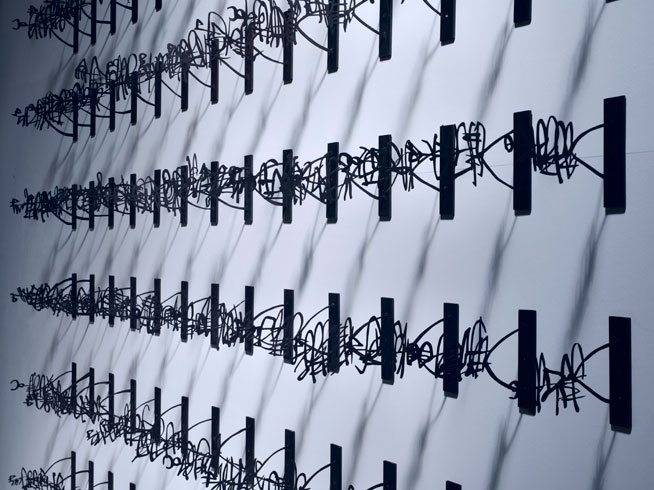 Zuma’s new brunch
The high-end Japanese restaurant in Abu Dhabi’s Sowwah Square had a good October. Not only did it win the Best Newcomer gong at the What’s On Awards 2014, it also launched its Baikingu brunch. Diners can choose from a selection of dishes including sushi, sashimi, Maki rolls, Black cod, spicy beef and desserts. It’s also kid friendly: highchairs and colouring books will be given to kids upon arrival.

Breakfast at the beach
Beach House at the Park Hyatt Abu Dhabi Hotel and Villas is now serving a breakfast menu, featuring salmon with potato and leek cakes, and oven-baked rosti with fried eggs.

Foie gras at Le Beaujolais
The king is in Abu Dhabi this month. But we’re not talking about Elvis. We’re talking about Robert Chaffanjon, Don’t know him? He’s been called the ‘king of foie gras’ in France (he’s the founder of Moulin De La Molle, a company that makes the controversial duck’s liver delicacy back in his home country). This month, he’s spending three weeks at French mainstay Le Beaujolais and will be preparing a special menu featuring the dish.

New abra experience on the creek
Never stood on the sand at the Shangri-La or Fairmont hotels and wondered how long it’d take to cross the Maqta Creek and reach the Ritz-Carlton? Wonder no more. A new abra sefvice has been launched, taking you on a 20-minute journey along the waters and it stops at The Ritz-Carlton, The Souk, The Fairmont Bab Al Bahr and the Shangri-La Hotel.

November deals from Ornina
Abu Dhabi’s Mediterranean restaurant, Ornina, situated in Al Bandar, has announced its promotions for November. Happy hour will be every day between 4pm and 7pm, with 20 per cent taken off of every bill. Mondays are Cosmopolitan Nights, where ladies can enjoy free Cosmo cocktails from 9pm to midnight, Tuesdays are Spanish Nights, with live music, while Wednesdays are called Margarita Passion, with free cocktails up for grabs for the fairer sex between 9pm and midnight.

Saturday brunch at Flooka
The Lebanese seafood restaurant at the Eastern Mangroves Promenade launched a new Saturday brunch last month. On the menu you’ll find seafood paella, fish taouk, grilled fish shawarma and a selection of traditional Arabic desserts. Sitting outside is the best idea here, as the views of Abu Dhabi’s mangroves are an ideal backdrop for a leisurely munch on the weekend and there’s a bar serving cocktails on the terrace, plus a face painter to keep kids occupied. Live Arabic tunes are provided by Talal Kontar and his band.

Sign up and stride
The annual Abu Dhabi Striders half marathon takes place on Yas Island on November 14 and there’s still time to sign up and take part. Participants get a day’s access to Yas Waterworld afterwards. 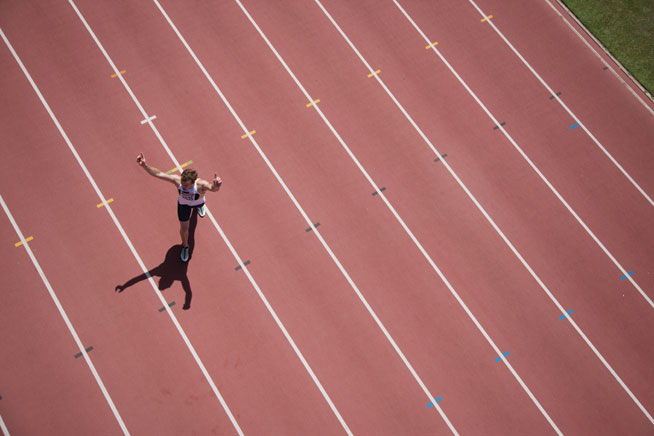 Lights at Sontaya (LAST CHANCE)
The Thai restaurant also celebrates the country’s Festival of Lights this month and is offering a special set menu.

Give your face a Powerlift
A new treatment at Talise Spa promises to make gents look younger – by applying electrical impulses to the face. The Aroma Powerlift simply plumps up your skin using impulses that are so mild, it feels similar to a light pinprick. The device, which consists of a selection of metal probes that are rubbed over your face, is the brainwave of London-based Aromatherapy Associates. While the treatment is safe, a session does start with one piece of advice – remove all jewellery, including rings.

Culture
Eat & Drink
News
Nightlife
Sport & Fitness
Things to do
Well-being
EDITOR’S PICKS
So, when is the next UAE public holiday in 2021?
READ MORE
All of the lavish new hotels set to open in Dubai in 2021
READ MORE
16 of the best pool passes in Dubai that are fully redeemable
READ MORE
All of the restaurants at West Beach, Palm Jumeirah
READ MORE
MOST POPULAR
NCEMA: Additional supportive dose of Sinopharm is now available
UAE should be off UK red list 'very soon' says chairman of Emirates
Abu Dhabi gets a restaurant dedicated to the love of Udon
Flash sale: 50 percent off staycations at this luxe Palm Jumeirah hotel
How you can help the EAD protect Al Wathba Fossil Dunes
YOU SHOULD CHECK OUT
Our website uses cookies and other similar technologies to improve our site and your online experience. By continuing to use our website you consent to cookies being used. Read our privacy policy here.