O2 at Sofitel The Palm launches with Tiga

What’s On teams up with pals Hype to preview the opening a new nightclub in Dubai, O2 at Sofitel The Palm. Opening night features Tiga.

As Tiga comes to town to launch the O2 club, our pals at Hype could argue that constant reinvention, innovation and collaboration have maintained his position as one of dance music’s biggest stars. But Tiga’s real secret? He’s never lost his sense of wonder – or fun….

In 1993, when Tiga James Sontag was 17, he sold his most treasured possession: a Roland TR-909 drum machine. The reason? To fund a trip to Love Parade in Berlin.

Tiga’s mentor, Montreal house DJ Robert de la Gautier, put him in touch with a friend in Germany. “I arranged that this guy would give me 800 deutsche marks for my 909,” remembers Tiga. “I got off the train from the airport and handed it to him. He also let me stay with him for a week, so I was instantly plugged into the Berlin scene.”

Was it worth it? “Of course. It was incredible,” says Tiga, who ended up partying at legendary Berlin club Tresor and hanging out with early-’90s icons such as Westbam and Mixmaster Morris. His 909 was replaceable, but a week spent with techno’s big names: that was priceless.

Twenty years later, the reason Tiga is one of dance music’s most enduring DJs is that he’s never lost that wide-eyed, do-anything enthusiasm. You can hear it on Bugatti, released last year on his own Turbo label and earlier this year signed to Universal. The clipped, banging kicks, white noise engine drones and Tiga deadpanning, “Girl comes up to me and says, ‘What you driving? I say, Bugatti’” are exciting, weird and entertainingly dumb. Same with Givin In, the latest from his long-term ZZT collaboration with Florian ‘Zombie Nation’ Senfter. Released in March, it’s a rave-era homage built around a Lisa Stansfield sample. Both are records made by someone still in thrall to the magical possibilities located out on the dancefloor.

Tiga was 40 in July, but looks at least ten years younger, and – refreshingly – he doesn’t take himself too seriously. Bugatti, for example, was the result of “a couple of hours in the studio being a little bit stupid. The times I take myself the least seriously are the best. I’ve fought hard with myself to keep that childlike attitude. That’s how it felt with Sunglasses At Night, too.”

Is he surprised that Bugatti was signed to a major and playlisted at BBC Radio 1? “Yeah,” he replies, “it’s my favourite thing in the world when you make something weird with absolutely no calculation and people love it anyway.”

Crucially, Tiga can take a joke as well as make them. Getting off a recent flight to Munich, he tweeted, “Just spent 90min in a British Airways seat designed by a sadist with an exceptional mastery of geometry.” He got called out for it by satirical Twitter profile DJs Complaining. “Yeah…” he grins, shrugging as if to say it’s a fair cop. “DJing is a ridiculously good job,” he adds. “It was an insane job back when I was getting paid a hundred dollars a night. If you can make money out of making music, you’ve won the lottery.”

Tiga also seems to know everyone. Before he released Sunglasses At Night in 2001 and became the poster boy for the electroclash scene, he had a decade-long career as a nightclub owner and party promoter in his hometown of Montreal. “I know so many people from all these different eras,” he says. His career is built out of these connections. He is a serial collaborator. His first partner was Jori Hulkkonen, who co-produced Sunglasses At Night as Zyntherius. Hulkkonen also co-produced Bugatti. ZZT is his long-running project with Zombie Nation, and James Murphy, Soulwax/2ManyDJs and Jesper Dahlbäck featured heavily in the credits for Tiga’s two albums, first Sexor (2006) and then Ciao (2009).

His most important collaborator in recent years is Matthew Dear. The first track they worked on was Plush in 2012. At the time, Tiga admits, he was in a bit of a rut. “I started to have trouble finding things I liked. Then there was a dry period. Then I started to ask questions.”

Dear was the shot in the arm Tiga needed. Since Plush the pair has made two killer club tracks billed as Tiga vs Audion: Let’s Go Dancing (2013) and this year’s Fever. Dear has also co-produced much of Tiga’s third album (almost finished, but no release date yet). The important thing about the Matthew Dear hook-up is that Tiga made it happen. He cold-called him. Tiga is a big believer in powering through the lows. “Almost everyone who’s serious doesn’t wait for the muse, they just keep going,” he says. “That’s what you have to do. I guess I just have enough energy to keep going with things. I’m never satisfied.” 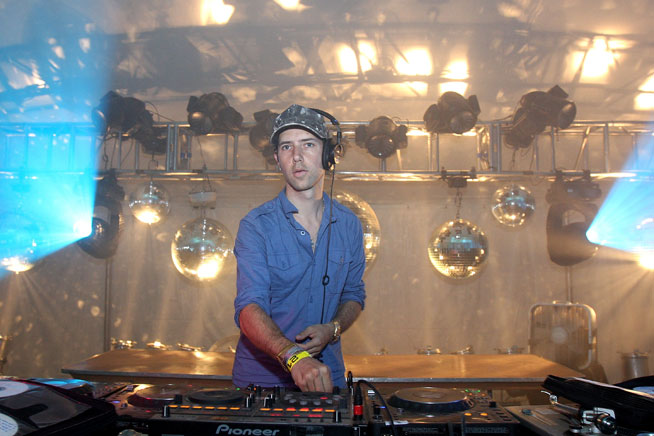 Tiga may be a byword for all that’s hip and trendy, but it didn’t start out that way. He talks about how Altern 8 changed his life, specifically Evapor 8. When he heard Strings Of Life by Derrick May he thought May had sampled Alter 8, not the other way round. He grew up on the dayglo sounds of rave, not the cooler techno influences and Kraftwerk. “I was the guy who wore a gas mask at parties,” he says. “That’s the stuff that made an impression on me.”

And that’s why he has a soft spot for EDM. It is, he says, the logical extension of Boys Noize and 2ManyDJs: “high octane, maximum, go to ten music.” He sees similarities between the music he loved as a teenager, Altern 8 or Acen, which was “crazy, full of ideas and irreverence, speeding vocals up, sampling James Morrison” and a record by Bauer, who’s “a crazy kid who has weird ideas doing it in a weird way”.

He doesn’t agree with someone like Seth Troxler (a friend, by the way) who thinks EDM is the worst thing ever. In the summer, Tiga played at Electric Daisy Carnival in Las Vegas. The bill was full of big EDM names. He was blown away by the energy. “It was properly awesome,” he says. “It reminded me of seeing The Prodigy. It was the same thing for the ten thousand kids watching. If I’m honest, if I was 17 now I’d be down the front
at Skrillex.”

All this comes with the caveat that he’s not really into most of the music that gets tagged as EDM; that EDM and underground dance music are so different as to be incomparable. “Steve Aoki and Marcel Dettmann are totally different in every way. You can’t really compare them.” But at the same time he doesn’t have time for people who rewrite their personal history to cast themselves in a better light. “The people who champion deep house or a 20-hour François Kevorkian set, I think they conveniently forget they weren’t hatched that way.” He pauses for a moment, thinking, then adds: “D’you know what? I’ve tried really hard to retain that naivety you have when you first start going clubbing. I’m not into being more old-skool than someone else. I don’t like that. I’d rather be new school.”

Clubs
News
Nightlife
EDITOR’S PICKS
UAE holiday dates announced for Eid Al Adha
READ MORE
Emirates extends suspension of flights from India to UAE again
READ MORE
Coming soon: Everything we know about Ain Dubai so far
READ MORE
Khorfakkan set to open new tourist attraction 580 metres above sea level
READ MORE
MOST POPULAR
It's Dhs350 to brunch, stay and play at the What's On Lock In this weekend
UAE weather: Temps of over 50ºC recorded in the shade yesterday
Get a free Expo 2020 day pass when you fly with Emirates
A popular fairy-tale is gracing the stage at The Theatre at Mall of the Emirates in August
UAE petrol prices will increase again in August 2021
Exclusive interview: John Cena on his role as a 'douchey Captain America'
YOU SHOULD CHECK OUT
Our website uses cookies and other similar technologies to improve our site and your online experience. By continuing to use our website you consent to cookies being used. Read our privacy policy here.