What’s On has video of dancing skydivers in Dubai that has gone viral. Published on GoPro official YouTube, it shows skydiving over The Palm.

An incredible video of a skydiving dance routine shot over the Palm Jumeirah has gone viral, receiving almost 300,000 views in its first four days online.

Released on the official GoPro YouTube channel, the 80-second footage shows jumpers Aleksander and Mikhael in tandem as they plummet towards the ground.

The effortless of their moves, which include flips, twists and even making contact with one another on several occasions, are quite at odds with the 120kph speeds they reach. 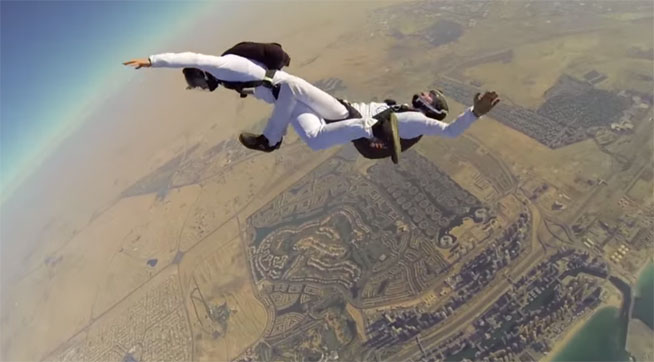 It is not the first time Dubai has been used as the backdrop to sky high stunts. In December, footage emerged from Jetman Dubai (Yves Rossy), an ex fighter pilot from Switzerland, using jet-propelled wings in tandem with a light aeroplane.

The release of the video also comes at a time when ‘X Dubai’ sculptures have been popping up across town. Appearing both in front of The Greens by Sheikh Zayed Road and also on World Trade Centre roundabout, the giant yellow ‘X’ represents a company that calls itself ‘an ambassador for action sports’ in the UAE.

The group were also behind the infamous Burj Khalifa basejump video. In April 2013, the world’s tallest building – which stands at 828m – saw Soul Flyers World Champions Vince Reffet and Fred Fugen break the Guinness World Record for the ‘highest base jump from the tallest building in the world’ when they took flight from a three-metre platform protruding from the very top.

X Dubai are also supporting the upcoming Spartan Race in Dubai, which takes place on February 20, and have previously aligned with the Flyboard World Cup.

Outdoor
Sport & Fitness
EDITOR’S PICKS
Ramadan in Dubai: 38 iftars to try
READ MORE
Where can Dubai residents travel? Check out these 14 destinations
READ MORE
Rumours, facts and reveals: New Abu Dhabi bars and restaurants
READ MORE
UAE announces reduced working hours for Ramadan 2021
READ MORE
MOST POPULAR
Layali Ramadan: BIG sales on shopping, stays and dining in Abu Dhabi
A cool vegan restaurant is now open in a villa in Jumeirah
Brunch & Cake launches beautiful Ramadan-themed desserts
UAE weather: Get ready for temperatures to reach 48°C this Ramadan
Step into spring with these stunning floral restaurants
YOU SHOULD CHECK OUT
Our website uses cookies and other similar technologies to improve our site and your online experience. By continuing to use our website you consent to cookies being used. Read our privacy policy here.