US burger chain Five Guys to open in Dubai

What’s On announces the arrival of Five Guys in Dubai, one of the most popular burger chains in the world, opening inside Dubai Mall.

Interviews for positions within the Dubai Mall outpost were held in early March, when we first revealed the news. An opening in May has since been confirmed.

The American chain recently opened in Covent Garden in the heart of London where die-hard fans camped overnight to get their fill of the US phenomenon. The reviews have been sensational. The Londoner raved it as being “heaven in a brown paper bag” and The Sunday Times called it a “substantial mucky oozing beast, in the best way”.

It began in 1986 by a Virginia couple and their four sons. A quarter of a century (and another son) later, they have over 1,000 branches worldwide, and the five sons – the five guys – are still at the helm.

If the hype is to be believed, the Five Guys offering is the “best fast food burger ever.” Five Guys has a cult following that includes world leaders, celebrities and pop stars – from US President Barrack Obama (his is a cheeseburger with lettuce, tomato and jalapeno peppers) to reality TV celebrity Kim Kardashian and even One Direction’s Niall Horan. 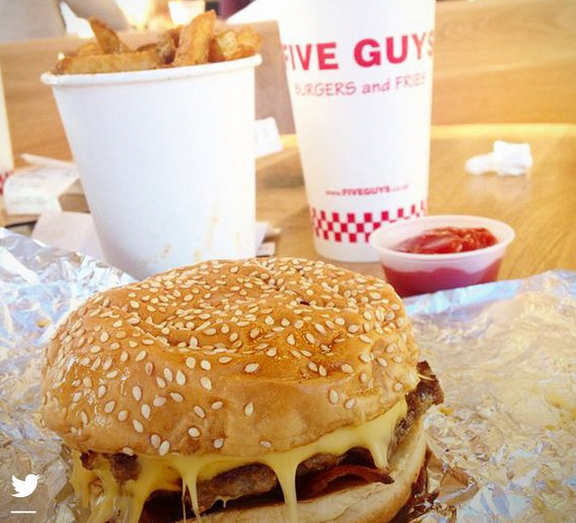 So what makes it so special? The build-you-own-burger chain is known for having more than 250,000 ways to customise your burger, as well as huge helpings of fries. It also certainly ticks all the boxes for quality and freshness by insisting on made-to-order burgers, quality ingredients and attention to detail, hand cut fries made in 100 per cent peanut oil, and a zero tolerance stance on the use of freezers.

Meanwhile an award-winning Californian burger restaurant is also hitting our shores soon.  The Habit Burger was voted America’s best by Consumer Report magazine and is set to open in the UAE this year. Started by two brothers in Santa Barbara in California in 1969, The Habit specialises in ‘charburgers’ beef patties cooked over an open flame, wedged between traditional buns or sourdough bread.

Eat & Drink
News
Restaurants
EDITOR’S PICKS
Here's the full list of UAE public holidays in 2023
READ MORE
23 incredible things to look forward to in the UAE in 2023
READ MORE
Hidden gems: 10 UAE desert pop-ups to discover this winter
READ MORE
Where to travel in 2023: 10 new flight routes from the UAE
READ MORE
MOST POPULAR
Cult Expo bakery, Bread Ahead to open in Mall of The Emirates
First look: Milos by Costas Spiliadis opens in Atlantis the Royal
Upcoming performances, international artists and more in Dubai
16 upcoming shows, sports events, concerts and festivals in Abu Dhabi
Win a holiday around the world with Dubai Creek Resort
YOU SHOULD CHECK OUT
Our website uses cookies and other similar technologies to improve our site and your online experience. By continuing to use our website you consent to cookies being used. Read our privacy policy here.