Abu Dhabi is a real fitness hub at the moment, even more so after the success of TriYas and the Terry Fox Run in February. In March there’s several 5k and 10k runs taking place at Zayed Sports City, and there’s also the Color Run taking place in the capital on March 27. Want more? A Desert Warrior Challenge event takes place on Yas Island on April 24.

That’s a lot of swimming, running and cycling – and probably a lot of aching limbs as a result. And one popular way of reducing post-event pain is to go for a sports massage. There’s a lot of debate in the medical world as to whether a sports massage actually does work or not, but what is for certain is it’s a relaxing way to stretch out tired limbs after a big event. What’s On tested five sports massages in Abu Dhabi (and listened to a lot of pan pipes in spas as a result) to see if they can rejuvenate tired, sore bodies.

Active Muscle Massage at Zen the Spa
The Beach Rotana offers a 60 or 90-minute Active Muscle Massage at its Zen the Spa, which it claims will target tense, aching and overworked muscles. The staff here clearly know their stuff: one therapist, Ayu Erawati, has more than nine years’ experience and was the winner of the Best Spa Therapist Award at the 2013 Middle East Spa Awards.

The treatment features three main stages: it started with a dry massage through towels to relax the body (if you start by directly going to the pressure points it can cause inflammation). Next up was a massage using oils (products from UK brand Aromatherapy Associate’s De-stress range are used to boost circulation and heal muscles), and finally it was on to the real massage: think pressure points, knots and elbows working their way down your back. The massage was intense and full-on, but not painful, even if you’re suffering from achy muscles. Arms and legs were also stretched to improve flexibility, and even cheeks and your forehead get some TLC. Overall? Achy muscles felt considerably better after a session at Zen the Spa. 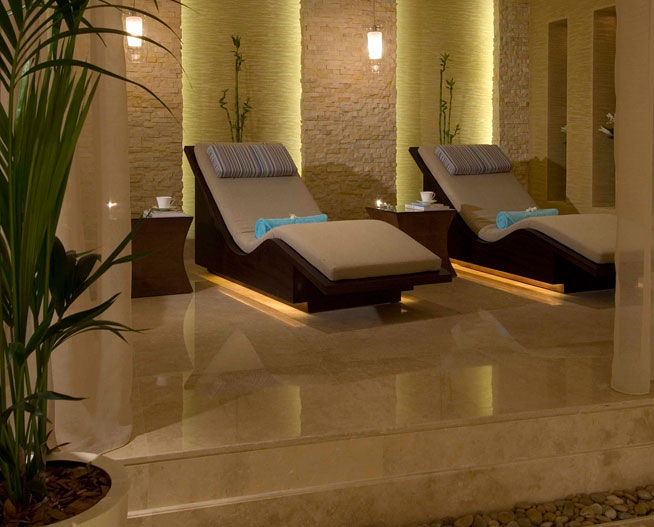 Sports Massage at So Spa
If you want your body to make repeated cracking sounds like a bowl of Rice Krispies, try a sports massage at the Sofitel’s So Spa. The treatment here combines stretching with lymphatic drainage and, most importantly, Balinese techniques. It means it’s one of the most up close and personal of the massages What’s On reviewed. The therapists will climb over your body and turn limbs in ways you didn’t think were possible, and pretty much every part of the body, from the feet to the spine to the shoulders, will crack. That doesn’t mean it’s painful, though, and the sound was immensely satisfying. Elbows were used to increase the pressure, even both at the same time at one point on the back and spine. As well as the extreme limb cracking, thumbs were used to assist with lymphatic drainage (this helps to reduce aches and pains from stiff joints). Finally, some tapping and pounding from the therapist’s hands helped muscles to relax after the treatment. It’s one of most intense treatment you can try, but it’s also the one that had the most impact: stiff limbs were noticeably happier straight afterwards and also the next day. 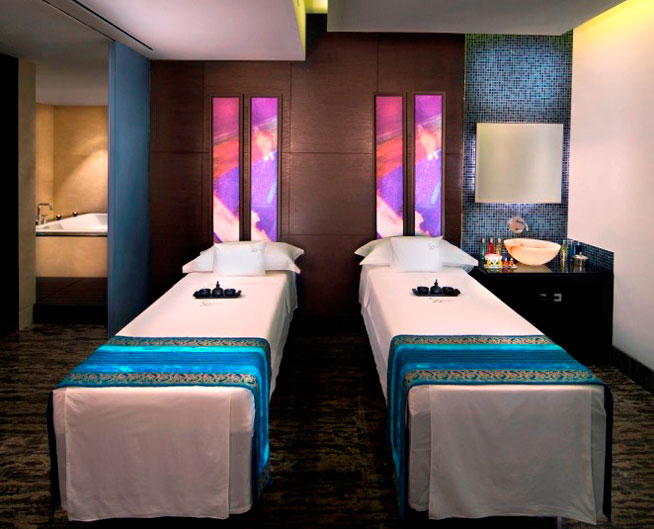 Sports Majestic at Atarmia Spa
The Park Hyatt’s sports massage is more mellow than some, but is no less thorough. The deep tissue treatment here is chilled enough that we nodded off a couple of times, and the use of thumbs and knuckles on the calves and thighs in particular was especially satisfying. Palms are used on the back and knuckles tackle the glutes. Light pressure was applied at first to relax muscles before the main treatment, and the therapist used Kirsten Florian ginger oil throughout, which its claimed helps to relax muscles even more and is good for skin. The spa also uses Natura Bisse fitness gel on sporty clients. The Barcelona-based companies product is made of eucalyptus and reduces muscle aches (you can even use it on your temples to tackle headaches). What’s On tried the 60 minute treatment, but the 90 minute version includes a massage with a bag of herbs, which are heated, and help to reduce muscle aches even more. 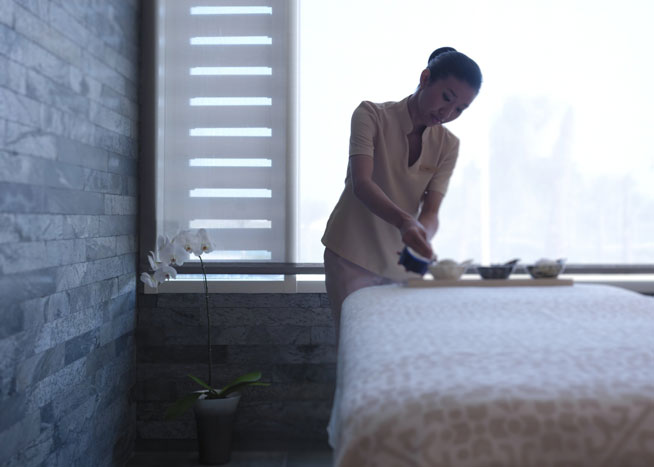 Sports Massage at Talise Spa
The Spa’s sports massage is another on the mellow end of the scale, and is just as much about relaxing as it is about breaking down pesky knots and dulling aches and still limbs. Our therapist recommended a session in a steam room for 15 minutes before the massage (to help relax muscles) and the treatment started off with a heat pad being left on the back while the legs and glutes were worked on. It’s chilled enough that we dozed off, especially when tension wass being worked out of the calves and thighs. You can choose from four oils during the treatment, including lavender, if you need to relax, and lemongrass, if you want a more uplifting feel to the treatment. The spot pressure, as the therapist calls it, isn’t too intense (no clicking and yelping needed) although is surprisingly effective at dulling aches for a few hours. 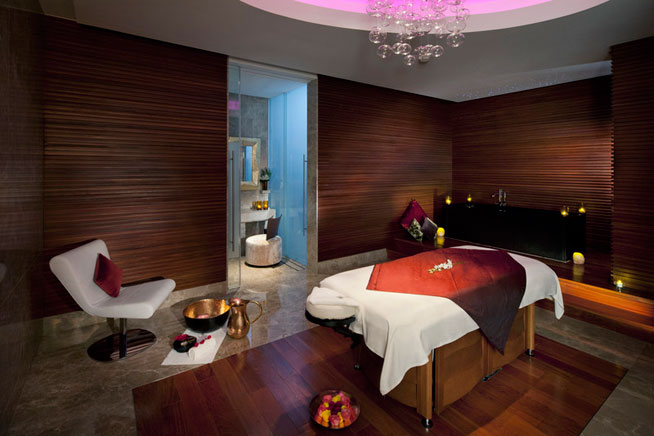 Sawat-Dee Thai massage at Zayna Spa
While actually a Thai massage, this treatment at the Grand Millennium Al Wahda is also a good bet for athletes, and uses Thai techniques and acupressure to work knots and aches from limbs. It differs from the other therapies What’s On tried because it’s a dry massage – no oils are used at all, meaning it’s also great for people who have sensitive skin. The session though, was far from sensitive – but in a good way. No oil means the therapist can apply even deeper pressure, and did this by using their knuckles and in particular, knees and elbows. In fact, the knee was used here more than in any other treatment we tried. The therapist will even sit on their knees on your glutes and use their knees to massage your thighs. Ask for hard pressure and it’s guaranteed you will probably let out the old yelp as it’s an intense feeling (you won’t be falling asleep here), but it’s also a good pain, and perhaps more than any other massage tried, it had an instant effect of easing the ache from limbs. The old cliché of no pain, no gain was certainly true here. 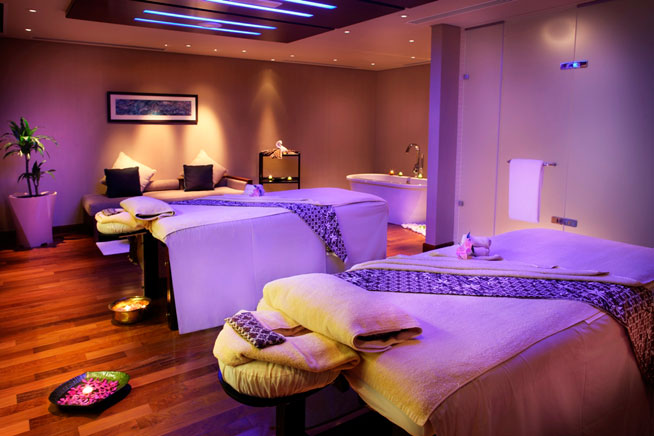 Spas
Sport & Fitness
Well-being
EDITOR’S PICKS
UAE holiday dates announced for Eid Al Adha
READ MORE
Another update: Emirates extends suspension of flights from India to UAE
READ MORE
Coming soon: Everything we know about Ain Dubai so far
READ MORE
Khorfakkan set to open new tourist attraction 580 metres above sea level
READ MORE
MOST POPULAR
Feast on the best unlimited chicken wing deals in Dubai
It's Dhs350 to brunch, stay and play at the What's On Lock In this weekend
6 great things to do in Abu Dhabi this week: July 25 to 28
6 fun things to do in Dubai this week: July 25 to 28
10 of the most expensive properties for sale in Dubai right now
YOU SHOULD CHECK OUT
Our website uses cookies and other similar technologies to improve our site and your online experience. By continuing to use our website you consent to cookies being used. Read our privacy policy here.