What’s On has details of Skydive Dubai Dream Jump from Princess Tower, Dubai Marina, part of ‘Dream Jump Around the World in 80 Jumps’.

If you thought base jumping from the top of Burj Khalifa was as extreme as it gets, think again. Dream Jump has come to Dubai.

This latest stomach-churning adrenaline sport was unveiled on Sunday on the 99th floor of Princess Tower, currently Dubai’s tallest residential tower. It is a collaboration between Skydive Dubai and Tomasz Zielinski, the creator of the part bungee, part base jump.

So what exactly is it? In its simplest form, Dream Jump Dubai will use multiple zip lines, totalling over 10 kilometers of rope, suspended high over the iconic Dubai Marina skyline and will provide those brave enough to take it on with the chance to experience freefall without deploying a parachute. The experts say it is a patented technique of jumping off heights using a belay system, dynamic ropes and pulleys, allowing the jumper to jump from any object.

The showcase will take place between April 13 and 19, with the public being given the chance to leap from an eight-metre platform protruding from near the top of Princess Tower. 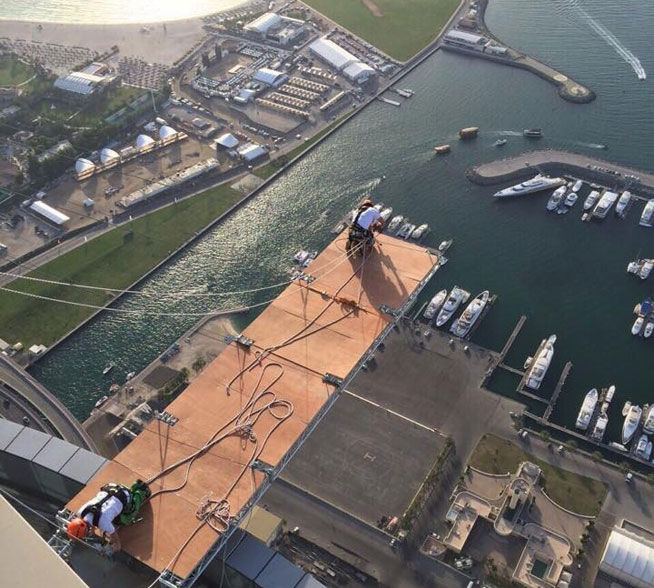 An official booklet handed out at the unveiling detailing how the public could get involved in the exciting event mistakenly contained incorrect information. What’s On published this information in good faith but have since been told details of a competition were incorrect. We apologise to all those who acted on the information and will continue to work with organisers to bring you the most up-to-date information just as soon as it is available.

Originally invented in America, rope jumping has been taken to further extremes by a group of Russian action athletes. Now, a group of rope jumpers who call themselves The Dream Walkers, are planning to jump in 80 of the world’s most ravishing beauty spots, including Dubai.

Speaking to The National newspaper about the safety of the Dubai Dream Jump, Thomas Zielinski, the designer of the system said: “Bungee is just one rope. This has two, so it is safer and more comfortable. The system is 100 per cent safe, but it is only possible to jump in good weather with no wind.”

News
Outdoor
Sport & Fitness
Things to do
EDITOR’S PICKS
Ramadan in Dubai: 38 iftars to try
READ MORE
Where can Dubai residents travel? Check out these 14 destinations
READ MORE
Rumours, facts and reveals: New Abu Dhabi bars and restaurants
READ MORE
UAE announces reduced working hours for Ramadan 2021
READ MORE
MOST POPULAR
It's official: Ramadan begins on Tuesday, April 13
Dubai Sports World is back with a range of activities to help you stay active
8 of Dubai's best authentic pizza spots
Sheikh Hamdan: Dubai will soon be home to self-driving taxis
Updated Ramadan hours for parking, Darb toll and buses in Abu Dhabi
YOU SHOULD CHECK OUT
Our website uses cookies and other similar technologies to improve our site and your online experience. By continuing to use our website you consent to cookies being used. Read our privacy policy here.