He may be almost twice the age of the lads in One Direction (who played the UAE just a few weeks before he will), but Robbie Williams, could teach them a thing or two. He knows how to write a hit (Let Me Entertain You, Angels, Millennium, Rock DJ). He can dance. He can sing. And he’s shown it for more than 25 years…

THE LIFE AND TIMES OF ROBBIE WILLIAMS

February 13, 1974 Robert Peter Williams is born in Stoke On Trent, England.
1990 The 16-year-old Williams joins English pop group Take That. Original members of the group included Gary Barlow, Howard Donald, Mark Owen and Jason Orange.
1995 Robbie leaves Take That after health problems and friction with other band members come to a head.
1995 Robbie is spotted hanging out with Oasis frontman Liam Gallagher at the Glastonbury Festival and is a constant fixture in gossip magazines.
1996 Robbie announces he has signed with Chrysalis Records as a solo artist. 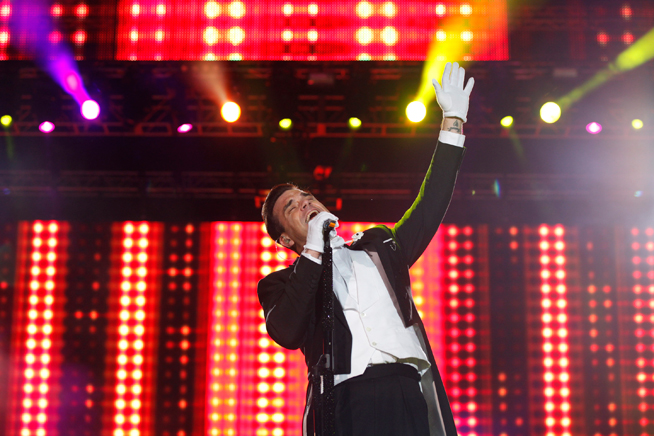 September 1997 His debut album as a solo artist, Life Thru A Lens, is released. His fourth single Angels becomes a worldwide hit.
March 3, 2000 Robbie Williams takes his on-going feud with ex-Oasis frontman Liam Gallagher up a notch, with a challenge to fight him in a televised boxing match for £100,000.
2000 The music video for his hit song Rock DJ is censored by major TV music networks for its graphic content. Robbie is shown undressing, ripping off his skin and internal organs until he is a skeleton. The single goes on to win a Best Single Of The Year at the 2001 BRIT Awards.

October 2002 Robbie signs what is believed to be the UK’s biggest record deal at the time. Second only to King Of Pop Michael Jackson, the £80 million (Dhs440 million) contract with EMI Records has the 28-year-old singer joking that he is, “rich beyond my wildest dreams”.
2006 Williams and Turkish American actress Ayda Field begin dating.
September 4, 2006 Williams’ single Rudebox is released. While reaching No4 on the UK chart, the song is mocked by the tabloid press. The Sun calls it the, “worst song ever”.
2007-2008 During a hiatus from his music career, Williams decides to investigate UFOs and extra-terrestrial life. In an interview with singer Joss Stone, he claims to have seen UFOs three times.
November 26, 2009 Williams proposes to Field on Australian radio channel 2Day FM. It’s later revealed the proposal was a joke.
July 15, 2010 Williams rejoins Take That to the delight of fans everywhere.
November 2010 The aptly named Take That album Progress is released. It becomes the second-fastest selling album in UK history.
August 7, 2010 Joke proposal or not, he and Field get married at his home in Los Angeles.

September 18, 2012 His daughter Theodora Rose is born.
November 15, 2013 Williams’ tenth studio album, Swings Both Ways, is released and becomes the UK’s 1,000th No1 album, and his eleventh album to top the chart.
October 27, 2014 His second child, a boy, is born. They name him Charlton Valentine Williams.
March 25, 2015 His newest international tour, Let Me Entertain You, kicks off in Madrid, Spain. He’ll play his gig in Abu Dhabi on April 25.

THE WORLD ACCORDING TO ROBBIE

On turning 40 in 2014
“I know that time isn’t on my side like it used to be. I’m conscious of age but I’m more suspicious of it than anything. This crossroads means something, but I don’t know what it is yet.”

On self-improvement
“I am not as bad as people would suggest. Not as good as I would like to be.” 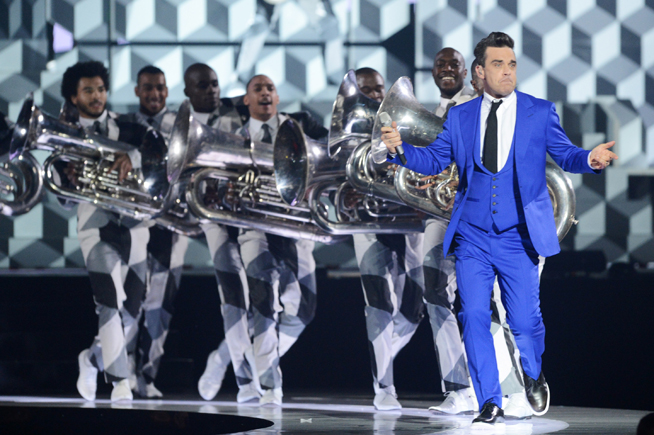 On fatherhood
“I’m a fiercely self-absorbed narcissistic person, and my daughter being on tour with me means I am forced to think about someone else.”

On live shows
“Performing is like a danger sport. Every time you get on stage you’re vulnerable and the number of people looking at you is unnatural. It can be frightening. Most of the time when I’m feeling confident, it’s thrilling – almost spiritual.” 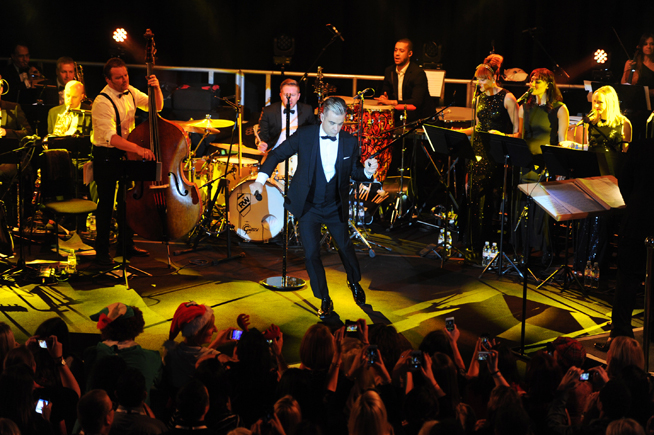 On songwriting
“It’s been a sensational hobby that I get paid for. And I never get bored of it.”

On his wife Ayda Field
“I love my wife’s company. She gives me a lot of energy – she’s like a one-woman cheerleading team. We get on very well and she keeps me entertained. She has anchored my life and made me feel secure, and saved me from a life of self-destruction.”

On ego
“I have a gigantic ego and need to be at the top of the pile and be doing amazingly well. Also, at the same time, I’m just pleased to be anywhere.”

On looking back
“There’s no point regretting things. If you can’t do the time, don’t do the crime. Life’s too short to worry about things I’ve said.” 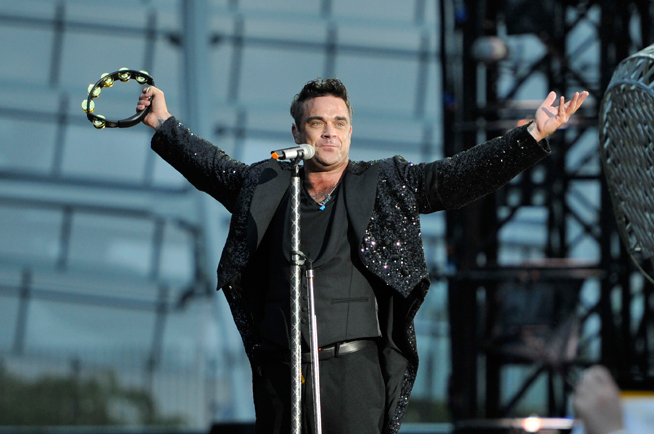 On happiness
“I’m on good form. I’m an older guy. I feel healthy, I’ve been training, I’m looking after myself, I get up early. I look after the dogs. I’m happy.”

On fame
“It’s success, not fame, that is quite addictive. I’m addicted to a lot of things and, as it happens, success is one of them.”

BAND OF BROTHERS
When Robbie Williams first quit Take That in 1995 in the middle of touring, media reports claimed phone lines had been set up in the UK to deal with suicidal teenagers upset with the split. While we’re not sure if this is actually true, the hysteria behind the less-than-amicable break-up was certainly real. The band continued to tour without him, but would later be disbanded in 1996. Take That reunited in 2005 (minus Robbie) and staged a comeback tour in the UK and Ireland in April. Williams, meanwhile, was busy with his own highly successful solo career. The band buried the hatchet and any bad blood in 2010, with the announcement Robbie would rejoin the group. However the reunion was short-lived, as Williams left a year later to once again focus on his solo career. In 2014, Jason Orange also quit the band. But if history teaches us anything, that doesn’t mean you should count out a special 25th year anniversary reunion in 2017 just yet. 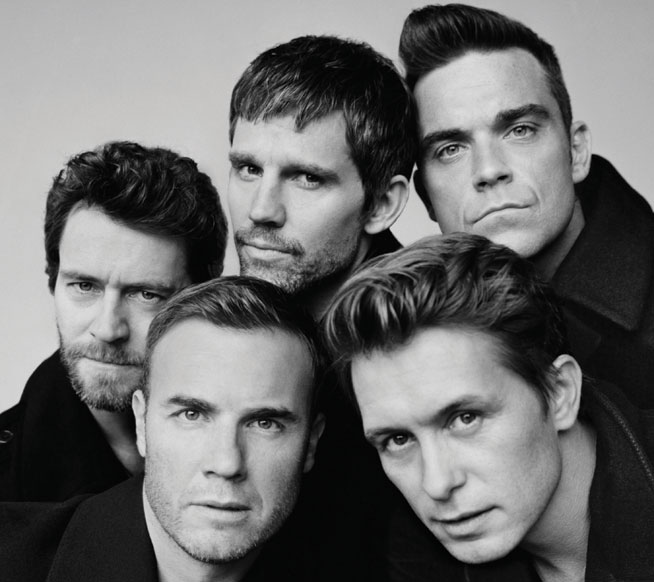 News
Nightlife
Things to do
EDITOR’S PICKS
Here's the full list of UAE public holidays in 2023
READ MORE
23 incredible things to look forward to in the UAE in 2023
READ MORE
Hidden gems: 10 UAE desert pop-ups to discover this winter
READ MORE
Where to travel in 2023: 10 new flight routes from the UAE
READ MORE
MOST POPULAR
Cult Expo bakery, Bread Ahead to open in Mall of The Emirates
First look: Milos by Costas Spiliadis opens in Atlantis the Royal
Upcoming performances, international artists and more in Dubai
16 upcoming shows, sports events, concerts and festivals in Abu Dhabi
Win a holiday around the world with Dubai Creek Resort
YOU SHOULD CHECK OUT
Our website uses cookies and other similar technologies to improve our site and your online experience. By continuing to use our website you consent to cookies being used. Read our privacy policy here.