Check out the route for cycling’s Abu Dhabi Tour

What’s On looks at how the best cyclists in the world will pedal 555km when they compete in the Abu Dhabi Tour from October 8 to 11.

Pedal power is set to take over the capital this October when the city hosts the inaugural Abu Dhabi Tour, a 555km competition taking place in various locations across the emirate, and featuring some of the best cyclists on the planet. Now, you can see where the tour will visit thanks to a handy video detailing the different stages.

The tour takes place October 8 to 11 and is split into four sections:

Stage 1 is called The Liwa Stage, and the riders will travel from Qasr Al Sarab to Madinat Zayed in the Western Region. Stage 2 is known as the Capital Stage and will visit Yas Island, the Sheikh Zayed Grand Mosque, Saadiyat Island and the Corniche. Stage 3 takes place in Al Ain and looks the most challenging, with the steep inclines of Jebel Hafeet making up part of the course. Finally, the last segment is called the Yas Stage, and includes a 20-lap sprint around the city’s Formula One track, Yas Marina Circuit. 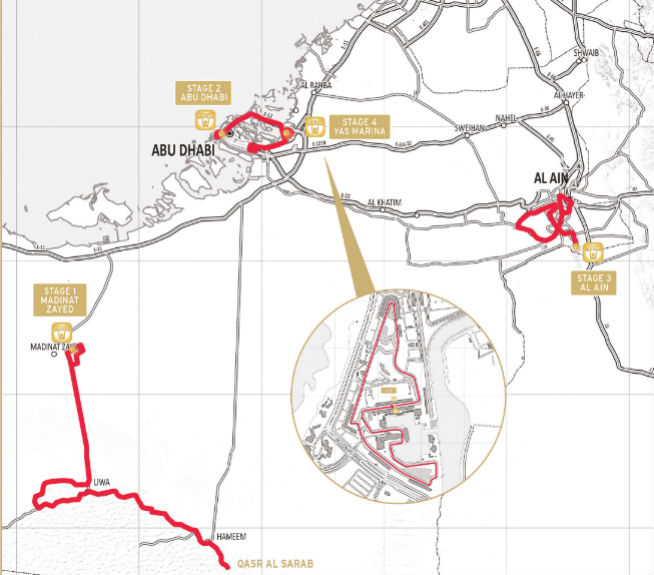 British cyclist Mark Cavendish won the second Dubai tour in February of this year and is expected to ride in the capital, and he’s optimistic about his changes of repeating his success in the emirates – as long as his team Etizz-QuickStep are invited.

“There’s three sprint stages, which obviously bodes well for myself and the Etixx–Quick-Step team. There is one stage that is more suited for climbers, but we’ve got guys who can do well there, so Etixx–Quick-Step and myself will be looking to go there and be successful,” said Cavendish. “I’ve not been to Abu Dhabi before but I love the emirates and the people have been very welcoming. I know Abu Dhabi is going to put on a splendid show for the Tour in October. I can’t wait to come and ride. Hopefully my team gets an invitation!”

News
Outdoor
Sport & Fitness
EDITOR’S PICKS
UAE holiday dates announced for Eid Al Adha
READ MORE
Emirates extends suspension of flights from India to UAE again
READ MORE
Coming soon: Everything we know about Ain Dubai so far
READ MORE
Khorfakkan set to open new tourist attraction 580 metres above sea level
READ MORE
MOST POPULAR
Review: It's chilled vibes all the way at Jumeirah Islands Clubhouse
Review: Carna Dubai, a vibrant steakhouse 74-storeys high
Pics of the week: Your best photos of the UAE
New films to watch in cinemas this week: August 5 to 11
Brilliant evening brunches for every day of the week
YOU SHOULD CHECK OUT
Our website uses cookies and other similar technologies to improve our site and your online experience. By continuing to use our website you consent to cookies being used. Read our privacy policy here.