"I struggle with criticism; I want everyone to find me funny" – Michael McIntyre

What’s On has details of Michael McIntyre in Dubai 2015. The stand-up comedy in Dubai will be on June 12 and 13 at Dubai World Trade Centre.

It’s probably safe to assume that when Michael McIntyre saw the careers counsellor at his upmarket private school in England, he wasn’t advised to work on his skipping skills. Nevertheless, it was his ability to bound gaily across the stage in the manner of an over-excited four-year-old-boy that would eventually turn his fortunes around, taking him from jobbing stand-up to the world’s highest-earning comedian.

When he finally caught a break at the renowned Comedy Store club in London, the 39-year-old was more than Dhs220,000 in debt and travelling the country performing in low-end clubs for less than Dhs900. Then he appeared on the Royal Variety Show, performing a series of physical comedy skits that saw him flying across the stage, arms swinging, and suddenly he found the door to the VIP room of comedy had opened before him. 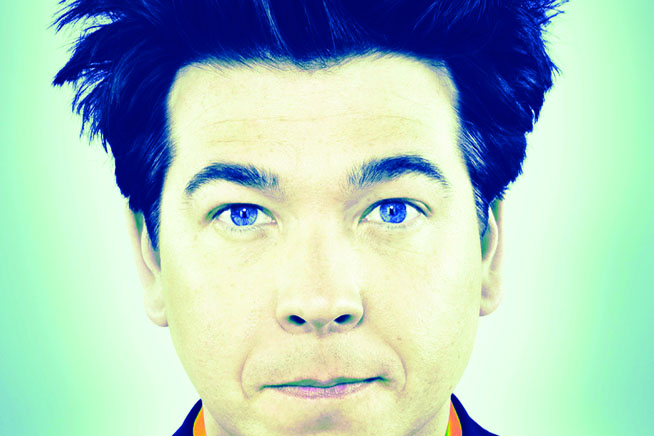 “The days when I couldn’t pay the rent and used a salvaged microwave as a dining table seem a world away now,” he says. “Yet I haven’t forgotten just how tough it can be. I used to look at houses and dream about them being our perfect place when in fact I couldn’t even afford to pay the rent, let alone buy a house.”

No such worries nowadays. Public accounts in the UK suggest McIntyre made more than Dhs110 million between 2010 and 2012, rocketing him to the top spot on the comic league table, and putting his naysayers safely in their place.

And naysayers there are. For while he can sell out a stadium tour in mere minutes, McIntyre’s popularity hasn’t always extended to his peers. Despite his years of trying to catch a break, his meteoric rise to the status of household name saw some comedians dismiss him as an overnight success, renouncing him in the press for being too safe, not edgy enough, the comedy equivalent of a woolly jumper.

“There was just a terrible vibe around the circuit,” McIntyre recalls. “Maybe people just can’t cope with how jovial I am. There was one time when I was actually in the loo in the dressing room, and they all started talking about me. I had to open the door and say, ‘Hello!’ It got so bad that I started [being horrible] about myself just so people would talk to me.”

To say he’s had the last laugh would be an understatement. Something of a hero figure in the UK, he stepped back from Simon Cowell’s money-making talent search TV show Britain’s Got Talent after one season, deciding he was just too nice to trample on other people’s dreams. Being on stage is all he’s ever wanted to do, and it’s all he intends to continue doing.

“The reason I’ve struggled with some of the criticism is that I really want everyone to find me funny,” he adds. “I really want to entertain everyone. It’s my job and I want to be good at it. I want to make people happy.”

Culture
News
Theatre
EDITOR’S PICKS
So, when is the next UAE public holiday in 2021?
READ MORE
All of the lavish new hotels set to open in Dubai in 2021
READ MORE
16 of the best pool passes in Dubai that are fully redeemable
READ MORE
All of the restaurants at West Beach, Palm Jumeirah
READ MORE
MOST POPULAR
What’s On The Bookshelf: Rom-coms great for reading on the beach
Book your holiday package from Dhs1,399 per person with Holidays by flydubai
Immersive cabaret concept The Theater Dubai opens its doors
Culture guide: Exhibitions, workshops and more to check out this weekend
A one-off speakeasy brunch is happening in Dubai soon
YOU SHOULD CHECK OUT
Our website uses cookies and other similar technologies to improve our site and your online experience. By continuing to use our website you consent to cookies being used. Read our privacy policy here.