What’s On has video of the Dubai Turtle Rehab Project at Madinat Jumeirah and Burj Al Arab. See turtles released in Dubai.

About 45 turtles – including five outfitted with special satellite tags – have been released into the ocean next to Burj Al Arab to mark World Sea Turtle Day. 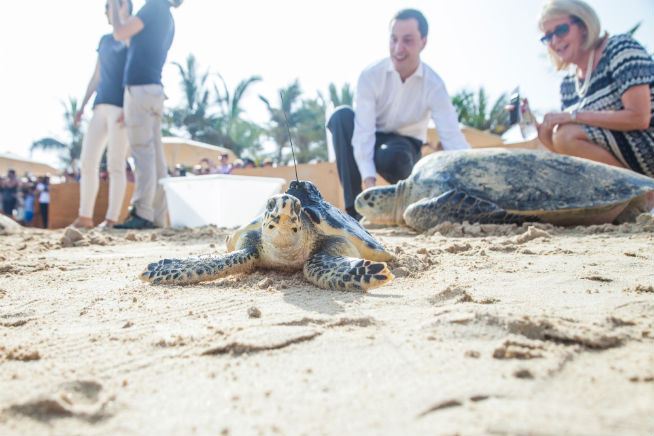 The event was also attended by hundreds of eager onlookers, including children who helped guide the little critters down to the shoreline.

The Dubai Turtle Rehabilitation Project – one of the longest standing corporate social responsibility initiatives in the region and the only project of its kind in the Middle East – nurses sick and injured turtles that are brought in to the centre throughout the year, and when they have made a full recovery, the DTRP set them free. 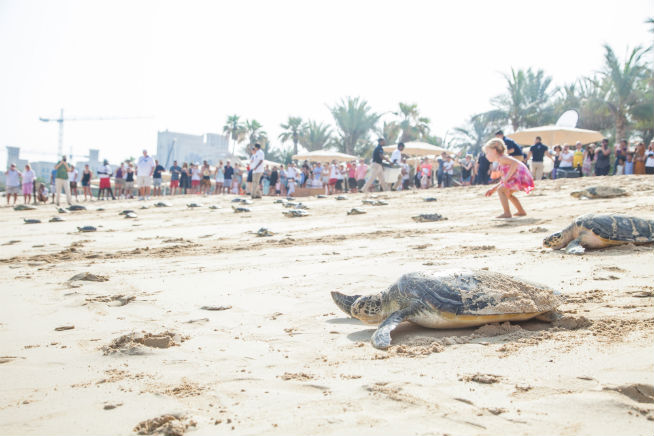 “Turtles come in to us with a range of illnesses but mostly it’s an infection, an impaction or the ingestion of a foreign item. Some turtles are hit by jet skis, get entangled in fishing nets or ingest cigarettes,” explains Warren Baverstock, the Burj Al Arab’s aquarium Operations Manager.

“Our turtles go through intense rehabilitation at Burj Al Arab before being moved to the large enclosure at Mina A Salam. Some turtles take a few weeks to rehabilitate, but others take months.”

“One of the large turtles we have released today took us 18 months to rehabilitate so it’s very special day.”

Check out the incredible turtle release in Dubai:

News
Outdoor
Sport & Fitness
EDITOR’S PICKS
Here's the full list of UAE public holidays in 2023
READ MORE
23 incredible things to look forward to in the UAE in 2023
READ MORE
Hidden gems: 10 UAE desert pop-ups to discover this winter
READ MORE
Where to travel in 2023: 10 new flight routes from the UAE
READ MORE
MOST POPULAR
With its unique decor, Dubai's La Nina restaurant evokes tales of distant travels
Reservations are now open for French restaurant Fouquet's Dubai
The colourful Sharjah Light Festival returns next week
Relive those cosy winter moments at Chalet 105 at Twiggy
There are some big road closures in Abu Dhabi this weekend
YOU SHOULD CHECK OUT
Our website uses cookies and other similar technologies to improve our site and your online experience. By continuing to use our website you consent to cookies being used. Read our privacy policy here.