National Day of Peru: Where to try Peruvian food in Dubai

What’s On has reviews the best Peruvian restaurants in Dubai, just in time to celebrate Peru’s National Day on July 28.

Peruvian food is so much more than ceviche. Here’s our reviews of the best Peruvian restaurants in town.

Loccated in the brand spanking new Taj Hotel in Business Bay, Tesoro is one of the newest additions to Dubai’s dining scene – a romantic yet relaxed spot with soft, low lighting, high ceilings and quirky olive trees that bring the outdoors inside. The menu is Peruvian-inspired, with a mishmash of influences from Italy, India and the Middle East. The chefs at Tesoro handle the mix masterfully; the starters alone were worth the visit. The quinoa tabouleh (Dhs50) used the trendy South American superfood to replace bulgur wheat in this traditional Arabic salad, and it was assisted nicely with zesty tomatoes, onions, mint and parsley. The battered prawns with ginger and curry leaves (Dhs80) – spicy, smoky and perfectly tender – led to a serious fork fight over who got the last one. The main course of sea bass on a bed of creamy spinach (Dhs120) tasted pleasingly clean and healthy, with an amarillo dressing packing some wonderfully flavourful punch.

The desserts didn’t quite match up to the savoury courses, however, and the incorporation of traditional Peruvian ingredients – corn in the crème brûlée, quinoa in the crème caramel (both Dhs50) – was more of a distraction than anything else.

While the sweltering evenings mean that Tesoro’s terrace is out of action for the summer, look out for when it re-opens in September – it’s a lovely space with a stylish bar, and boasts one of the best Burj Khalifa views in Business Bay. 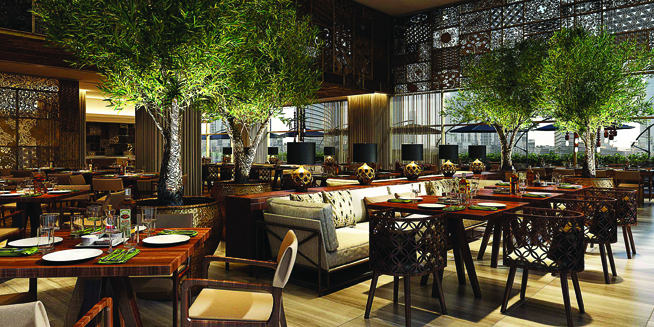 If you like corn, this is the restaurant for you. It’s in many dishes, soft and juicy, or sometimes crunchy and toasted. It’s even in the ice cream, but more of that later. Coya, awarded three hats in The Black Hat Guide, is a Peruvian restaurant that began in London in 2012. Such is the buzz surrounding that venue that its sister restaurant in Dubai has been packed to the rafters since opening. The crowd was excitable, chattering people sharing plates and discussing every bite. It’s a noisy, sociable sort of restaurant in keeping with its fiery Latin American roots.

Ratings: A
Atmosphere: Cosy
Price: Dhs750+ (based on two)

To get to the dining room, you must walk through the bustling bar – look out for the striking glass jars of pisco, a Peruvian spirit. The décor is stunning. Pieces of art and bits of sculpture sit on shelves; it’s shabby chic and very sexy.

To start, yellowtail tuna with a lovely, cleansing ginger and chili salsa. This came in tiradito form, which is similar to ceviche, but uses sliced fish instead of cubed. Next came the ceviche of sea bream and crispy corn – both dishes burst with flavour and tongue-tingling freshness.

The sharing concept means your choices appear when they are ready so be prepared for a bit of plate manoeuvring on the table. The ensalada de maiz, a combo of crispy corn, sweet onions, and red chillies, was a party in a bowl – a riot of flavour, freshness and colour. Skewers of beef heart with a bit of chili heat and some cooling parsley were wonderfully sticky and tender. The lamb chops were high-quality cuts of meat, the crushed aubergine on the side proving a perfect partner. Even better was the Chilean sea bass, which came with corn that was something between a purée and a risotto in texture. The only fumble was the sprouting broccoli, cooked with chilli garlic butter and sesame seeds, which was far too salty and smoky.

Don’t think we forgot about that sweetcorn ice cream. It came with popcorn on the side and was unusual, but very good. This restaurant is already one of Dubai’s big hitters and a fitting flagship for the Four Seasons Resort. 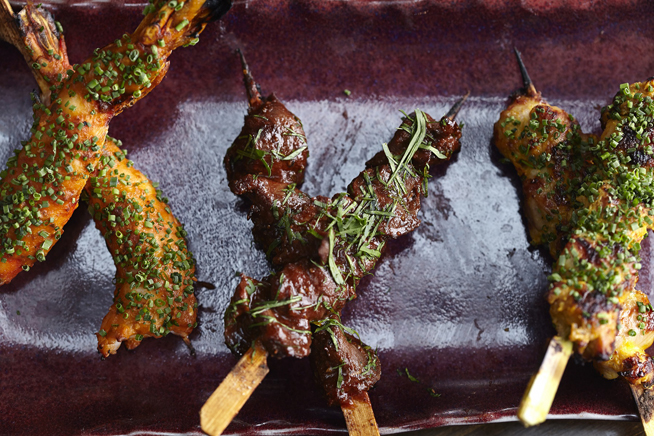 The weird and wonderful world of The Act must be seen to be believed. The fancy mock-Baroque venue is hidden behind an unmarked door on the 42nd floor of the Shangri-La Hotel. With its plush gold curtains, brass candlesticks and red velvet banquettes, you can imagine the Marquis de Sade rocking up with a ladyfriend on each arm, followed by Oscar Wilde, and then very possibly followed by Keith Richards. The faces of bygone people of note stare down at the crowd from a gilded balcony, and marble table tops reflect the light from the pretty chandeliers.

Waitresses in corsets circulate with Peruvian food as dazzling as the stage show. Try raw fish treats like ceviche and tartares, pastry empanadas, steaks with chimichurri garnish and desserts such as courguette cake with pecans and yuzu cream. Sensibly, the food’s arrival dovetails with the performances, letting you chat and eat between the acts. 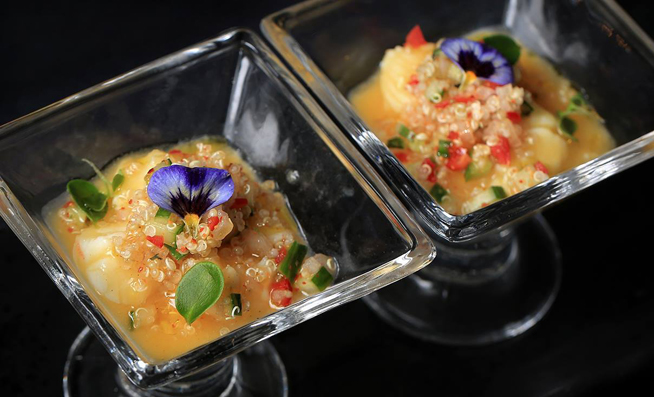 Appealing to those with a more rebellious approach to life, the venue is real, eclectic and aims to contradict the ‘bling bling’ of Dubai.

Story Rooftop Lounge is a vibrant nightspot for art, music and food lovers alike and is focused on pure quality throughout – from its world-class chef and award-winning mixologists, through to the bespoke art throughout the venue, Funktion One sound system and the best local and international house DJs. 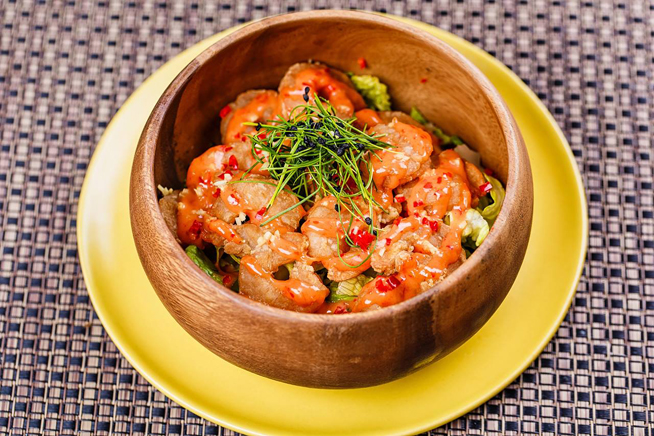 A vibrant new Latin American restaurant in the form of Poco Loco is opening its doors down at The Beach opposite JBR mid-August. Channelling the flavours (and interior design) of South America, expect lots of spicy huevos rancheros, cheesy quesadillas and sugary churros.

The Peruvian food trend continues at full steam with the opening of Garden. The restaurant opens at the JW Marriott Marquis Dubai, Business Bay and the food will lean towards the healthier side.