What’s On has details of the new themed movie nights at Claw BBQ. Plus other alternative movie screenings including Cinema Akil at A4 Space.

As a wise young Ferris Bueller once said: “life moves pretty fast, if you don’t stop and look around once in a while, you could miss it.”

Good thing then that Claw is giving film fans a chance to stop, relax and enjoy great flicks – including some ’80s classics – at its new movie nights.

Throughout the summer, Claw’s new private room, The Barn, is screening a back catalogue of epic films. Dates for the diary include SATC (July 8), followed by Ferris Bueller’s Day Off (July 22), Dirty Dancing (August 5) and then finishing off with Top Gun (August 19).

To really get a taste of the action, the team at Claw serve each guest a special food and drink menu tailored to the movie on show, think SATC served up with Cosmopolitans.

It might not be quite possible to twist and shout at the front of a Chicago parade or achieve that Dirty Dancing lift, but it is possible to enjoy a movie with friends while you all chow down on themed food and drink, served at the exact time it appears up on screen. In case you’re still hungry, there’s also popcorn and candy floss on offer.

Hidden at the back of the restaurant, The Barn is Claw’s new private dining-meets-game-room. Channelling an American tavern feel, darts boards, retro arcade games and a 65-inch screen deck the walls – imagine men in baseball caps saying things like ‘brewskis’.

The price of a ticket includes all food and and booking is recommended.

Meanwhile, indie movie fans should head to hipster haunt A4 Space in Al Serkal this summer where award-winning international films are screened most weekends as part of the Cinema Akil’s summer screening programme. 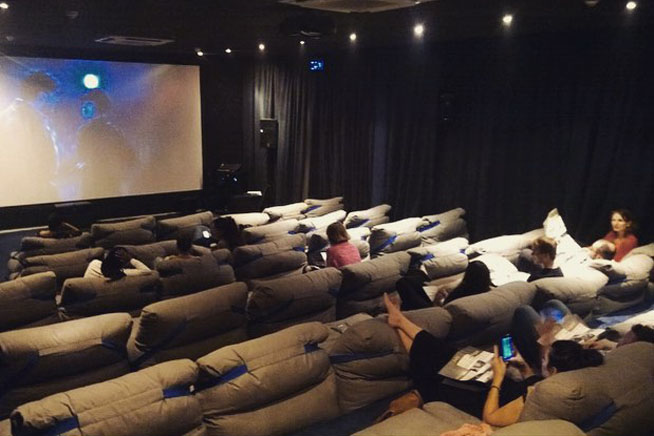 Culture
Eat & Drink
Film
News
Restaurants
Things to do
EDITOR’S PICKS
13 Sheikh Hamdan-approved restaurants in Dubai
READ MORE
Dubai brunches temporarily banned in new preventative measures
READ MORE
12 upcoming Dubai mega-projects we can't wait for
READ MORE
16 of the best beach bars in Dubai for sundowners
READ MORE
MOST POPULAR
Breaking: Dubai extends preventative measures until mid-April 2021
Enjoy brunch, breakfast and a stay at Westin Abu Dhabi from Dhs432
Get a free gym class at this cool new Dubai gym
Pics of the week: Your best photos of the UAE
Emirates Airlines and DHA to implement digital verification of traveller medical records
YOU SHOULD CHECK OUT
Our website uses cookies and other similar technologies to improve our site and your online experience. By continuing to use our website you consent to cookies being used. Read our privacy policy here.