Language: it’s something I find extremely fascinating. A quick survey around the office has concluded that we are a lazy bunch when it comes to learning other languages. Big ups to the Significant Other, then, who has recently been bragging that’s he’s teaching himself Spanish. So far, it’s lasted a week, and in his own words he’s “three per cent fluent”. (Don’t worry; you won’t be seeing him at the Dubai Comedy Festival anytime soon.)

But it got me thinking – and feeling rather ashamed – that in two years I haven’t learned any Arabic. Particularly when the youngest flatmate, The Cub, has picked up some pigeon Arabic after just six months. Granted, she’s a nurse and her Arabic mainly revolves around enquiring about patients’ bowel movements – not a great conversation starter in normal circumstances. But she’s still putting me to shame.

Away from her patients though The Cub has encountered a few language difficulties with her Filipino colleagues. Apparently, ‘ano’ means ‘what?’ in Filipino. It also means ‘I know’ in Scottish slang. So when her colleagues impart some wisdom, The Cub is prone to respond with “ano”, meaning “I know”, which they translate as “what?” Which prompts them to repeat themselves, and The Cub repeat herself, and thus a 20-second conversation can end up going round in endless circles.

Ah, the Scots’ dialect – something I thought I’d left well behind when I moved from Scotland to London in 2001. Until I ended up with two Scottish flatmates straight from the motherland  – The Cub and One Who Shall Remain Nameless – here in Dubai.

I now find myself slipping into Scottish brogue and colloquialisms I thought I’d long forgotten. For example, we might pop out “for some messages”, which has nothing to do with exchanging secret info in a covert operation and simply means we’re going to the shop for some groceries. If thirsty, we might be in desperate need of “some ginger”, which has diddlysquat to do with spice and means a can of fizzy juice (of any flavour). If we tell you to “haud your wheest”, it politely translates as “hold your tongue, you’re talking nonsense”. So good luck to anyone who may encounter us after we’ve had a few lemonades.

I have had a brush with other languages too, of course. I studied – and flunked – French at high school. After years of lessons, all I can remember is how to say: “I live in Glasgow, in Scotland. I’m 13. I have one brother and five goldfish.” Which would be great – if I was a teenager looking for a Saturday job in a French pet shop.

At the risk of blowing my own trumpet, I was also handpicked as one of the clever ones and plopped into a Latin class on the first day of second year at high school. Completely oblivious to any benefits this might bring, as an impressionable 14-year-old I’d much rather have been in one of the mixed ability classes along with the cool kids and pranksters. So my attention span for Latin lasted one day only.

It was a fruitful day, though. In Latin, I can still say: “Look, in the picture is a girl. The girl is called Flavia. Flavia is a Roman girl.” Which is about as handy as a rusty bicycle for a French goldfish. Arguing with the Latin teacher about a “pointless dead language” did more for my debating skills than language skills.

Thereafter, every time I saw ‘Latin’ on my timetable, I’d do a back door boogie out of school and hang around the nearby park until that class was over. I flunked that exam too. Spectacularly. 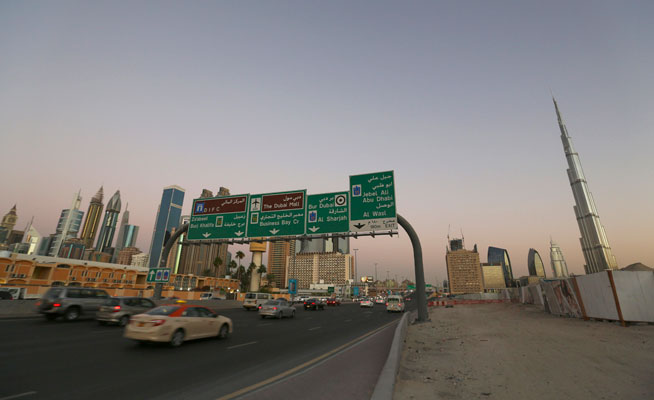 One day we’d like to be able to read the curvy bits on road signs too.

But back to Arabic: a new member of the team who speaks fluent Arabic has promised to teach us the basics. Or the basics, according to him. It’s hard not to believe we’re being duped into learning rude words when each lesson is delivered with a huge cheesy grin.

“And Latin,” said One Who Shall Remain Nameless. At which point the new work colleague and I looked at her wide-eyed in disbelief. Hoping she was joking. Which she wasn’t.

“Well, where is Latin from then?” she asked innocently, as we held our sides laughing.

“Oh, I thought the Scots invented Latin,” she said puzzled.

Hmmm, no prizes for guessing who skipped her history and geography lessons too.