Huge news for comedy fans in the UAE: the headliners have just been announced for the all new Dubai Comedy Festival, and they’re … drum roll … American legend Dave Chappelle and South African charmer Trevor Noah.

Running from October 14-24, the 10-day Comedy Festival will be held in venues throughout Dubai Marina – with the headline gigs at a purpose-built 4,500 seat venue at Skydive Dubai. Noah will be on stage on October 24, while Dave Chappelle will be headlining on October 22 and 23. 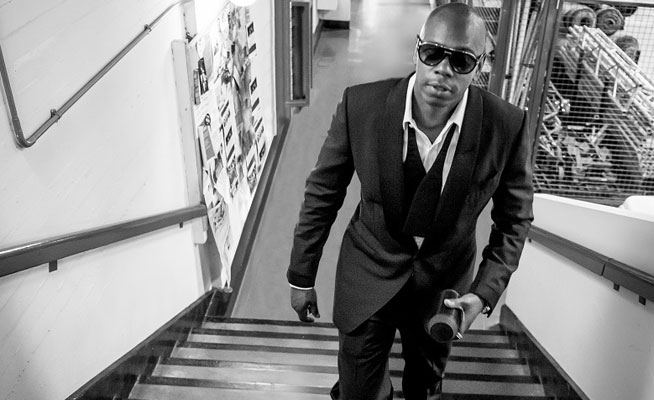 The man is a legend – Dave Chappelle.

GET TO KNOW THE HEADLINERS

The South African comedian started his career on a soap opera – Isidingo – in 2002 when he was just 18, and then began showing off his funny side on radio. Over the last decade he’s built a solid comedy career, known for his personable style and his commentary on modern South Africa.

This year he made worldwide headlines when it was announced he’d take over from Jon Stewart on the iconic Daily Show: on which he says he’ll “be taking things in a slightly different direction”.

He’ll begin that gig on September 28 (which probably means his trip to the UAE will be a whirlwind one).

Hanging out with my friends before I leave South Africa. Selfie game on fleek. #ImNotHoldingTheCamera #Cheetah #YesItsReal #AfterThisWeAteCheetos

He famously turned down a US$50 million offer for more seasons of the legendary sketch series in 2005, and went somewhat underground after that – performing only occasionally, and often unannounced.

In the last few years, however, he’s made a bit of a comeback: so his Dubai show will be a rare chance to see one of the most slick yet most slippery comedians to ever have picked up a mic.

I’m off to the gym. Replacing good character with good looks is a cornerstone of my comeback stratagem. (sarcasm)

Tickets are due to go on sale in the second week of September – but you can register now to be first in line for ticket releases.

News
EDITOR’S PICKS
13 Sheikh Hamdan-approved restaurants in Dubai
READ MORE
Dubai brunches temporarily banned in new preventative measures
READ MORE
12 upcoming Dubai mega-projects we can't wait for
READ MORE
16 of the best beach bars in Dubai for sundowners
READ MORE
MOST POPULAR
This Dubai beer garden is the perfect post-work watering hole
BOA Dubai has closed forever, here's what will replace it
2 Dubai chefs are teaming up for a cool collaboration in D3 next week
Win! Dhs500 to spend on food and beverages at Dubai Festival City Mall
The Vine Festival is back with new tasting experiences in the UAE
YOU SHOULD CHECK OUT
Our website uses cookies and other similar technologies to improve our site and your online experience. By continuing to use our website you consent to cookies being used. Read our privacy policy here.