Seeing Dubai through the eyes of Matt Ryder, artist and caricaturist…

Where are you from? A little town in the UK called Evesham, not far from Birmingham.

When did you come to Dubai? I first came here in 2005, and was here until 2010. I left for two years to live in Dublin, and I’ve been back for three years now. Originally, I was working in a non-creative field, but ended up doing more and more of my own thing and getting more involved in the art scene, which is why I stayed.

What do you do here? I’m a full-time artist but there are two very different sides to what I do. I have a company called Matt Ryder Caricature, so I do live caricatures at events, and illustrations for magazines and books. And I’m a fine artist as well. I paint, get work in shows and try to make a living as a painter as well. 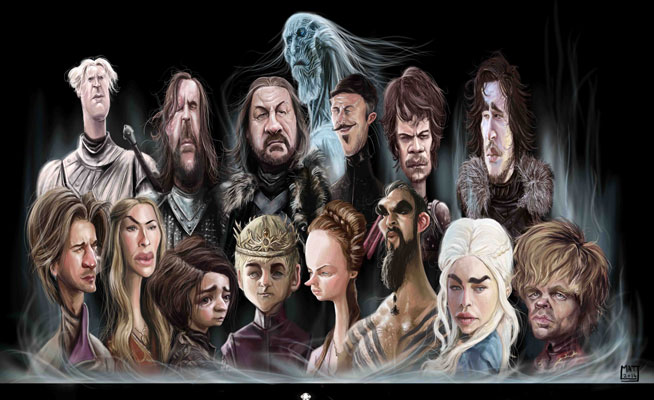 Have you always been interested in art? My grandfather was an artist so I grew up watching him. I studied art and although I didn’t go into it at a professional level straight away, I was always drawn to it.

What kind of art did you study? What I studied was more about the business of art – everything from marketing yourself to things like screen-printing. I made a shoe out of Styrofoam, and learnt how to use Photoshop, but there was no cartooning or painting. I taught myself how to do that.

Can you remember the first thing you ever drew or painted? I had an obsession with drawing spaceships and cars — really simple drawings — when I was little, but obviously they were terrible. I always used to draw my teachers in class and people at school. Those were my first caricatures. 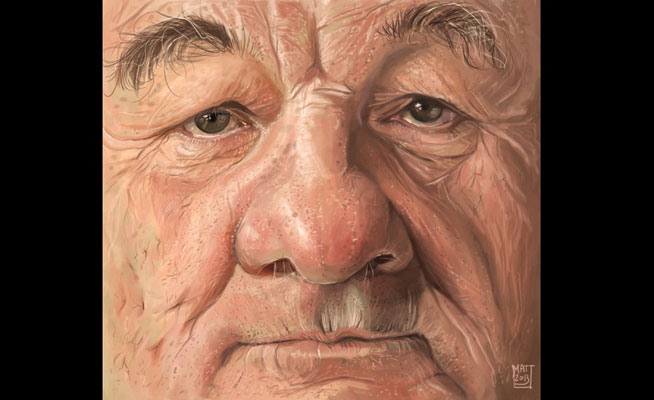 His portrait of Bill Murray

Have you ever done a caricature that went down really badly? Thankfully, my illustrations have always gone down well, but at the live events, there’s always somebody who doesn’t look at the caricature the way everyone else might. Some people don’t really know what a caricature actually is. They think it’s more of a portrait, and should be complimentary. I mean, it should be funny rather than insulting, but there are always people who take it the wrong way. Mainly mothers. When you’re drawing their kids, it’s more the mums who’ll get upset. But 99 per cent of the time, everyone loves them.

Do you have a favourite style of painting? I love oil paints. I started off with watercolours, moved to acrylics, and now I paint with oils. They all have their benefits, but oil’s a traditional medium. Acrylic paint’s great for large-scale work because it dries quickly but it doesn’t have the same feel as oil.

You paint a lot of wildlife as well… It’s something I’ve always done. I’ve always loved sketching birds and wildlife. When I was in Kenya a few years ago, I got a ton of reference photos – I took about 2,000 – and started sketching from those. They were well received, so I moved into watercolour paintings, and then started on bigger pieces.

What’s your favourite painting that you’ve ever created? The one that means the most is a painting based on a photo by the photographer Nick Brent, of an elephant called Winston. He’s just this beat-up old elephant with half his ear missing. A few months after that photo was taken, people tried to track down Winston and found that poachers had got to him, so this was the last photo of Winston, ever. It actually inspired a whole series of paintings of him. The painting is of him fading away into a black background, with very dull colours. That’s probably my favourite, especially because it kickstarted a whole new series of work. 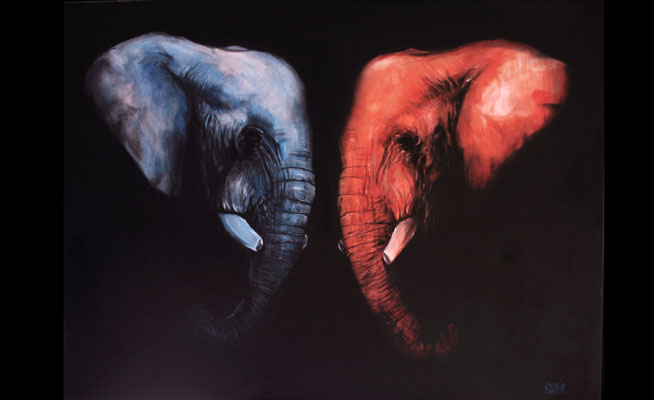 
Is there one thing in your studio you couldn’t live without? Other than my hands, it’s my easel. I love the thing – it has so much character, from the paint splatters to the oil stains. Every time a new canvas is loaded onto it, there’s a sense of the unknown about how the piece will come out, and so much tradition is attached to a wooden easel.

Who are some of your favourite artists? Internationally, there are so many — James Jean for his imagination; Jeremy Geddes for his unbelievable skills with a brush; Gerhard Richter for his ever-changing style; Walton Ford, Josh Keyes, the list’s pretty long.

Locally, more and more solid artists are emerging, and there are now so many talented artists here. I love the tranquil waves and abstract work of Kathryn Wilson (Ka8z), and I have the utmost respect for the humble artist German Fernandez, whose paintings are fantastic.

How do you feel about the art scene in Dubai? It’s completely different to how it once was. With established areas like Al Serkal and DIFC holding regular gallery nights, and events like Art Dubai, Sikka and Street Nights, it’s a great place to be. There’s a real trend for live urban artists and street art now, which didn’t exist five years ago. Companies like The Domino, Capsule Arts, Tashkeel and Drawdeck are really helping the scene to be taken seriously. 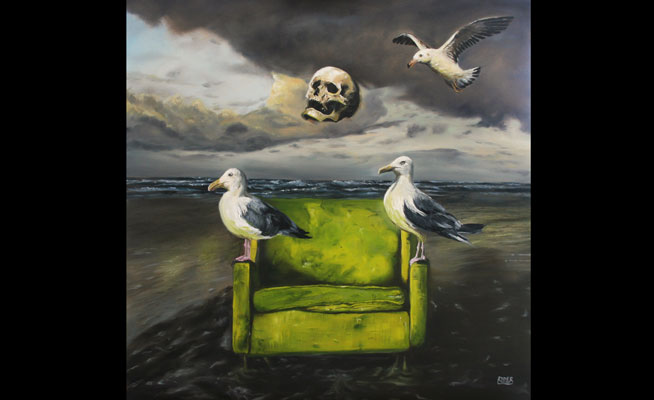 All Hail The King

First impressions of Dubai? I moved here having never visited before, so I was blown away. It seemed like a utopia, a melting pot of all sorts of amazing things. I honestly never thought I’d be able to find my way around, let alone make it my home. I’d never been to a city so clean, and had certainly never seen building on the scale that was happening in 2005 – it’s crazy to think back on that.

Have those impressions changed at all? Every time I land in Dubai after a trip away, I’m still blown away, except now it feels like I’m coming home.

Favourite place to eat in Dubai? I love The Ivy’s tasting menu. I’m also a big fan of Mexican food so Maya has to be up there as well.

Favourite place to catch up with friends? I enjoy the Reform Social and Grill, but my new favourite hangout has to be The Eloquent Elephant in the Taj Hotel, mainly because they commissioned a bunch of my paintings for the bar.

Favourite club or music event in Dubai? The best gig I’ve seen here has to be The Lumineers, which was at RedFest DXB last year.

Favourite international DJ or band? I have a mild obsession with Bon Iver – it’s the perfect music to paint to.

Favourite Dubai-based DJ or band? Tim Hassall’s a great live performer, and I’m always happy to see him live. If I’m feeling in the mood for something a bit louder, you can’t beat The Boxtones.

What do you do when you need some ‘me’ time? My wife and I regularly head to Fujairah to go snorkelling, which is great fun, and we take the dog out to Al Qudra Lakes when the weather’s cool enough. But I love to lock myself in the studio and paint the day away. 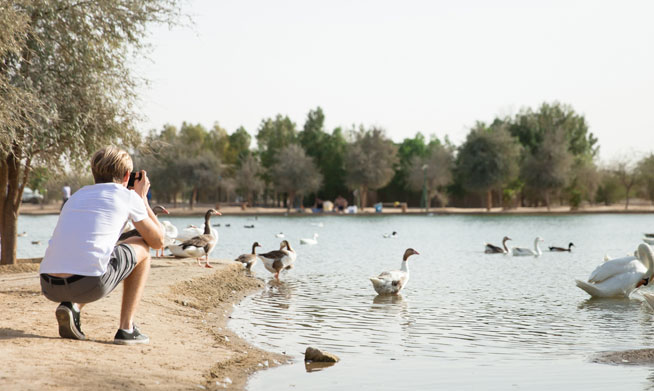 How would you sell Dubai to someone who has never visited the city? It’s a creative, clean, safe, awesome city.

What’s the secret to success here? Persistence is key. The UAE’s a place where you really can try something new. There are so many opportunities if you’re driven and you persist. Not taking no for an answer is also helpful.

Top tip for getting the most out of Dubai? Speak to people who’ve lived here for longer than two months. Get out of the mall and immerse yourself in the city. Oh, and come in winter.

What’s next for you? I’ve just launched my new website, ryderscanvas.com, where I’ll be selling limited edition prints as well as showcasing my new work, so I’m excited about that. I’ll be growing the caricature business and will continue to work on my current series of paintings, aiming for a solo show this year. I also have a big public art project that will be unveiled at the end of the month, which I’m looking forward to.

Also check out Capsule Arts to purchase some of his work, as well as mattrydercaricature.com and facebook.com/MattRyderwildlifeart.

News
EDITOR’S PICKS
Ramadan in Dubai: 50 iftars to try
READ MORE
Where can Dubai residents travel? Check out these 14 destinations
READ MORE
Rumours, facts and reveals: New Abu Dhabi bars and restaurants
READ MORE
UAE announces reduced working hours for Ramadan 2021
READ MORE
MOST POPULAR
It's official: Eid Al Fitr will start on Thursday May 13
Looking for a long stay in a popular Dubai location? Check out Hilton Dubai The Walk...
Review: Is The Orangery your favourite new date night spot?
Deals and discounts: It's all about the ladies on Tuesdays at La Mer
Here's how you could win Dhs50 million this Eid weekend
YOU SHOULD CHECK OUT
Our website uses cookies and other similar technologies to improve our site and your online experience. By continuing to use our website you consent to cookies being used. Read our privacy policy here.