Thrill seekers and film buffs listen up, as we have more info on Motiongate Dubai, a giant movie theme park that will open in Jebel Ali in October 2016.

The park – which will eventually be the size of 69 American football fields – will be one part of the huge Dubai Parks and Resorts, which, when completed, will be the Middle East’s largest leisure and entertainment destination.

Okay, now back to Motiongate, we now know there will be 27 rides there, including some based on Ghostbusters (epic!), Cloudy With A Chance of Meatballs, Hotel Transylvania, The Smurfs, The Green Hornet, Underworld, Zombieland, How To Train Your Dragon, King Fu Panda, Madagascar, Shrek, Step-Up and The Hunger Games.

(We hope the Shrek ride isn’t scary, as our most beloved cartoon movie of all time becoming something fearful would be too much to take).

This is what Motiongate will look like – although it may change slightly as it’s under construction still: 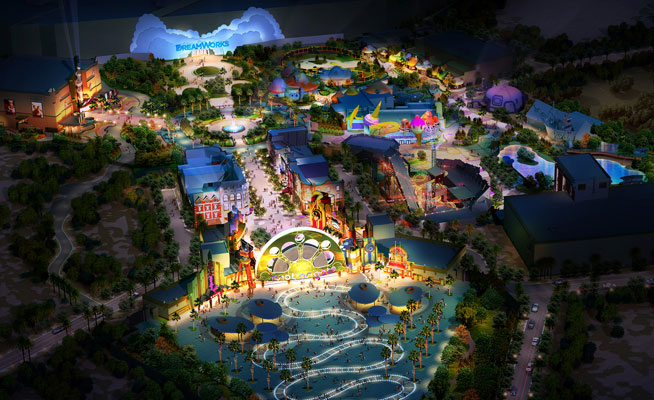 Here are more fun facts we’ve found out about the park:

– The Hotel Transylvania ride will be in a 2,800 square metre indoor space and will be seven minutes long. During it you’ll be seated in a carriage that holds four people. The ride is ‘trackless’, and there are 27 separate carriages going around at once, which means you’ll never know which way you’ll turn and you’re likely to have near-misses with other punters. The highest point of the ride is 42 metres (about the same height as the Statue of Liberty). The ‘story’ of the ride will be a surprise party hosted by the monsters in the movie.

Here’s what the entrance to that ride will look like: 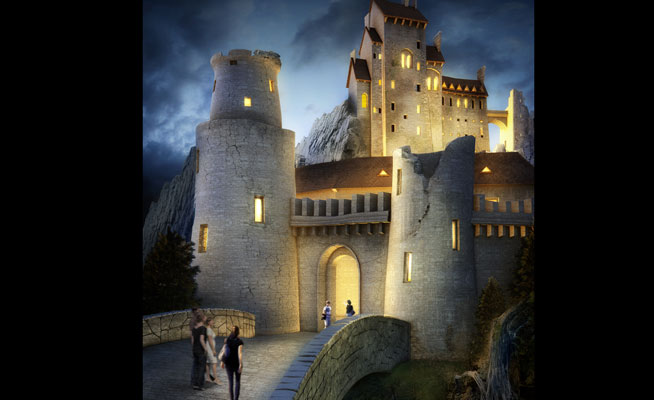 – Guido Zucchi, the General Manage of Motiongate says The How To Train Your Dragon attraction will be an interactive ride that is “unprecedented” and “unique worldwide”. We’re thinking holograms? “This is going to be Hollywood in the desert,” he said of the park in general.

– Unfortunately there are currently no plans to have the metro line extend to the theme park (let’s do a line to Sharjah first), however there will be space for 8,000 car parks, as well as a drop-off and pick-up point for taxis and buses.

– Motiongate is the first time that different major Hollywood studios have got together in one park – Sony Pictures, DreamWorks and Lionsgate will all have their own zones.

– There will be a water ride that will require 793,000 gallons of water (that amount of water will weigh more than 240 double decker London buses).

– There will be five roller coasters in Motiongate, with a total track length of 2,593 metres.

– There are currently more than 11,000 workers on site getting the park made, and there have been 21 million work hours completed in total so far.

– As well as a Hunger Games ride, the Lionsgate area will have a cinema that can hold 1,000 people.

Indoor
News
Sport & Fitness
EDITOR’S PICKS
Exclusive Reveal: Topgolf Dubai is here and ready for action
READ MORE
65 of the best outdoor bars and terraces in Dubai
READ MORE
7 brilliant dining deals in Dubai this month
READ MORE
18 of Dubai's most Instagrammable breakfast spots
READ MORE
MOST POPULAR
Abu Dhabi updates road entry requirements - January 2021
Did you feel it? Minor earthquake tremors felt by UAE residents
The stunning Hermès Carré Club is now open in Alserkal Avenue
Pics of the week: Your best photos of the UAE
Watch: A look inside Conor McGregor's Dhs20,000 per night Dubai villa
YOU SHOULD CHECK OUT
Our website uses cookies and other similar technologies to improve our site and your online experience. By continuing to use our website you consent to cookies being used. Read our privacy policy here.