Talked-about Pan-Asian restaurant Novikov makes its debut in Dubai: was it as good as anticipated?

When walking into a restaurant, the first five metres can be crucial in how much you enjoy the food to follow. As entrances go, the one at Novikov is hard to beat in Dubai. Into the lobby, up the lift and, boom, you’re in a cosy yet cavernous wooden bowl.

Hanging from the ceiling are giant black globes that look like they’re cracking and about to spill red lava, and above, high up in the roof, is a DJ booth. Over to the left by the open kitchen is a huge, beautiful display of fruit, vegetables and seafood, while roasted, bronzed ducks hang behind – a nod to the Pan-Asian food to follow. A man sits at one table wearing sunglasses and a trilby, while almost every other table is filled with locals clutching mobile phones and very expensive bags. Clearly, word of Novikov’s success and starry clientele in their Moscow and London branches has reached Dubai. 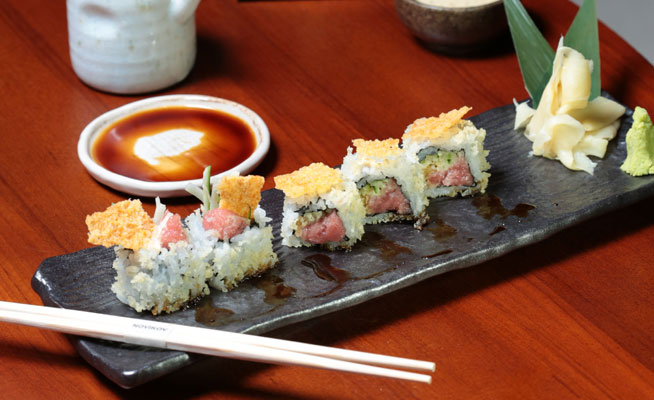 The menu is large with sections of appetisers, dim sum (steamed and fried), sushi, sashimi, rice, noodles, tempura, and dishes from the grill and wok. Service was faster than the sports cars lined up outside so take your time and enjoy the atmosphere.

Crab and avocado salad (Dhs95) was a good start with diced cucumber adding a lightness to the creamy avocado. A spicy tuna maki roll (Dhs65) needed a smidge more spice. Four simple slivers of yellowtail sashimi (Dhs85) were topped with a circle of red chili that made it look like a flag of an obscure African country; add a coriander sprig and it’s a magical mouthful. The spicy prawn money bag dim sum (Dhs40) was just about the prettiest dish we’ve seen in ages. Tied with a chive, the delicate parcels of chunky prawn could have been a money bag emoji. 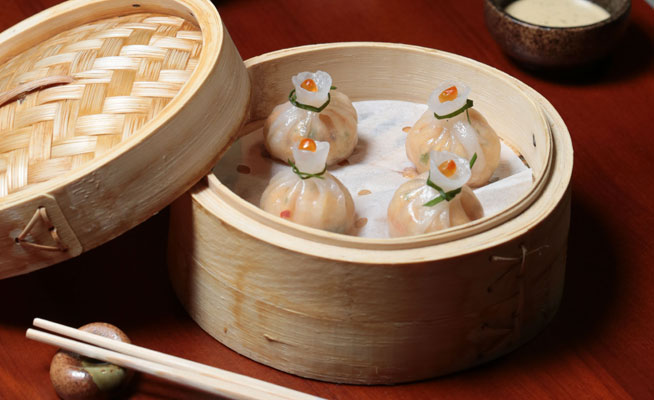 Portions weren’t huge so the substantial main course of steamed sea bass (Dhs110) was welcome. Juicy, sticky and silky, the fish was paired nicely with a ginger and soy dressing. Four skewers of grilled asparagus that had been cut into three-centimetre rods were wonderfully earthy (Dhs45), while a plate of Singapore noodles with prawns was salty, smoky and just asking to be gobbled up. The Peking duck (Dhs115) was standard – strips of cucumber, spring onion, pancakes and a dish of hoi sin sauce – but the duck had been cut into eight squares, which was Novikov’s slightly OCD way of smartening up the dish. 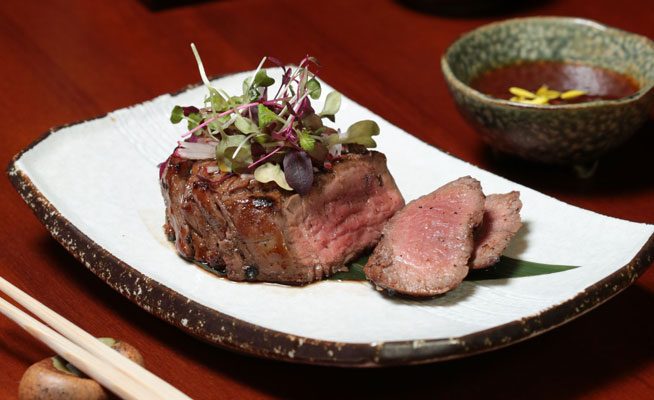 For dessert the vanilla yoghurt baked cheesecake (Dhs70) was perhaps the highlight of the meal. The combination of the salty, crunchy base and the sour yoghurt could not have been better. We could still taste the yuzu sorbet as we walked back out of this buzzing restaurant, took the lift down and into the lobby, thinking we’d like to do it all again.