Ah, a life on the ocean waves. Or an afternoon or evening, at least. You can’t beat a good boat party. Hype speaks to five promoters all at sea in the UAE…

1. Never Get Out The Boat 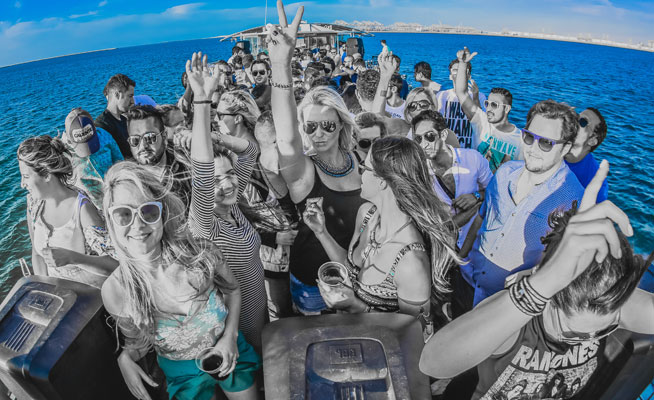 Music policy: House music in its various forms, from deep to tech and techno with some classics thrown in.

The boat: It holds 150 people – we wish it was more – and has an air-conditioned chill-out area downstairs and a long barge-like top deck. Most people spend the day on the top deck dancing.

What’s the crowd like? Mainly pretty clued-up music fans. Our crowd is there for the music and to dance, there’s no posing aboard our ship.

Which celebrity would you welcome on board? Margot Robbie

Which celebrity would you tell to walk the plank? Justin Bieber

Which DJ (and their decks) would you like to be stuck on a desert island with? The Horse Meat Disco collective. The music would be as wild as it would be varied.

When does it next set sail? Still to be confirmed but coming soon.

The boat: The Virgo, a 160-foot super yacht with three levels. And a Jacuzzi, of course.

What’s the crowd like? Everyone’s on board for a good time with no attitude or pretensions.

Which celebrity would you welcome on board? We’ll take anyone who wants to come – everyone is welcome!

Which celebrity would you tell to walk the plank? No one, we don’t discriminate… OK, except maybe for Justin Beiber.

Which DJ (and their decks) would you like to be stuck on a desert island with? DJ EZ, no question.

When does it next set sail? We run a boat party every six weeks, so the next one will be around the end of October.

The boat: It’s a two-level yacht with upscale interior and the capacity to hold 150 people.

What’s the crowd like? We have a very mixed nationality on board. Our party is for everyone to come and enjoy. We want everyone to have a great time and a truly memorable experience.

Which celebrity would you welcome on board? Our special guest host on board this month is an ex-NBA superstar who played for the Sacramento Kings.

Which celebrity would you tell to walk the plank? We wouldn’t. We respect each and every guest and are thankful for each person who joins our events.

Which DJ (and their decks) would you like to be stuck on a desert island with? DJ Mustard

When does it next set sail? Friday, October 2 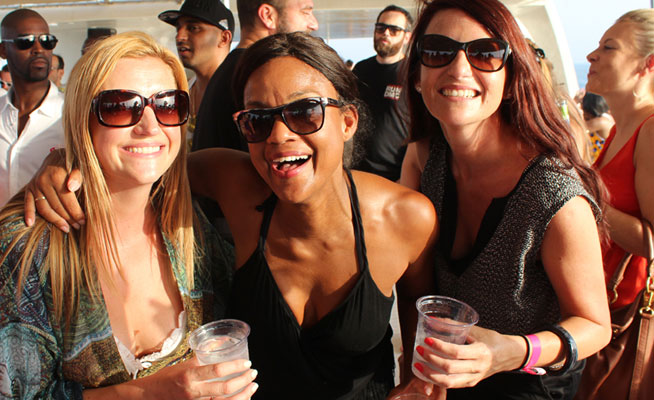 Music policy: A fresh mix of funk, followed by a dash of soul, added together with grooves that will literally blow your flip-flops off.

The boat: It holds 150 of the best people you will ever meet, with a canopy over the top, a big sound system and lots of boogie.

What’s the crowd like? Amazing! We have become a real family over the years. It’s guaranteed you will have 149 new friends by 8pm.

Which celebrity would you welcome on board? Everyone is equal on our boat so leave your business card at the door. There’s no VIP, no attitude, no musical snobbery, just good times.

Which celebrity would you tell to walk the plank? Local (ahem) celeb Danny Kwang.

Which DJ (and their decks) would you like to be stuck on a desert island with? Easy – Grant Nelson.

When does it next set sail? We like to keep it special, so we have them only three times a year. The next one is in November – watch this space.

Music policy: House, house and only house. We’ll be going on a journey, starting with some soul/nu disco sunshine happy tunes, onto funk/soul/’90s classics, then follow with vocal funky house and classics, and end with deep/tech-house. So something for everyone.

The boat: It’s the Elite House Boat, a thee-level yacht. There’s an inside VIP area, the main deck has a Jacuzzi and Funktion One sound set-up, and the top deck is a chill-out area.

What’s the crowd like? We’re aiming for a 50/50 split of male and female party people.

Which celebrity would you welcome on board? Daft Punk – that would be cool.

Which celebrity would you tell to walk the plank? Paris Hilton, so she can never touch a pair of decks again.

Which DJ (and their decks) would you like to be stuck on a desert island with? Erick Morillo. He would certainly keep us entertained!

When does it next set sail? Friday, October 2

News
Nightlife
EDITOR’S PICKS
Ramadan in Dubai: 50 iftars to try
READ MORE
Where can Dubai residents travel? Check out these 14 destinations
READ MORE
Rumours, facts and reveals: New Abu Dhabi bars and restaurants
READ MORE
UAE announces reduced working hours for Ramadan 2021
READ MORE
MOST POPULAR
It's official: Eid Al Fitr will start on Thursday May 13
Looking for a long stay in a popular Dubai location? Check out Hilton Dubai The Walk...
Review: Is The Orangery your favourite new date night spot?
Deals and discounts: It's all about the ladies on Tuesdays at La Mer
Here's how you could win Dhs50 million this Eid weekend
YOU SHOULD CHECK OUT
Our website uses cookies and other similar technologies to improve our site and your online experience. By continuing to use our website you consent to cookies being used. Read our privacy policy here.