Seeing Dubai through the eyes of… Alain Dupasquier, owner of Skull Cycles.

Where are you from? Switzerland.

When did you come to Dubai? I came five years ago to open a racing school with a friend, Pascal Grosjean, who was a rider at Dubai Autodrome. But that ended when Pascal unfortunately passed away, so I started a workshop.

What do you do here? I started Skull Cycles three years ago. It’s a motorcycle garage – we service bikes, customise them, and do a little bit of everything.

Can you remember the first time you got on a motorbike? I was about 16 years old and it was on a racetrack. My father’s passionate about motorbikes as well – it’s something the whole family’s been involved with.

My father had an endurance team. At the beginning, I was helping him and his team to change tyres during races. After I got my first bike, I started doing mechanics like this, just learning by myself, and I also worked with the mechanic on the team.

What inspired you to start customising motorbikes? When you’re racing on bikes, you don’t just buy one and ride it. On my father’s racing team, all of the bikes had been modified, and I learnt a lot back then. They were always trying to optimise their bikes as much as possible. 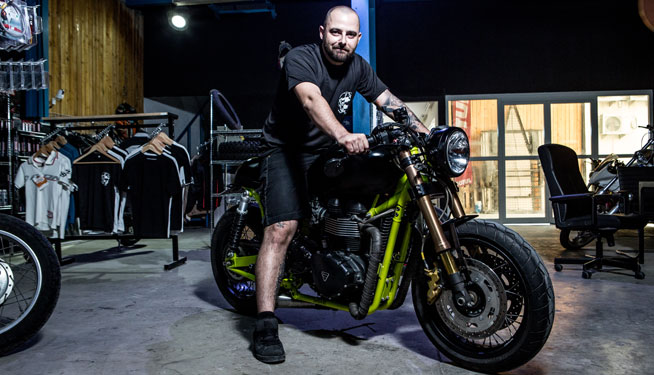 Have you ever done any really elaborate modifications? I have one customer who comes every few weeks, with new ideas and parts, and the bike isn’t even finished yet. He’ll show up wanting a new handlebar or a different engine. The last time he actually drove his bike was six months ago!

A lot of people want to change their bikes from normal, road legal bikes to bikes for the racetrack, so we remove the heavy parts, add powerful brakes and better suspension, and modify the engine.

What’s the most-requested customisation? Most people here want the most powerful bike possible, so come in asking to increase the horsepower.

Do you ever build bikes from scratch? No, but we do a lot to the bikes. For example, we have a Bonneville SS here, which we’ve stripped completely – it looks completely different now, and there’s hardly anything of the original bike left.

How many bikes do you own? Seven at the moment, and they’ve all been customised. I never have a favourite – it’s always the one I’m working on.

Gulf Bike Week is this weekend. What’s your involvement with that? We show off our bikes and accessories, and try to bring different types of bikes to show that we’re open to more or less every kind of job. This year we’re launching a T-shirt collection as well, designed by a Swiss artist who’s a close friend.

Tell us about the biking community in Dubai. It’s big, although there are definitely more choppers and Harley Davidsons here – they’re the most common. But the scene’s been growing very fast over the last two or three years.

Has Gulf Bike Week helped to change Dubai’s bike scene? It definitely gives more exposure to the biking community, and brings a lot of people to bike shows that wouldn’t normally come along.

Favourite place to eat in Dubai? Vapiano. I go about three times a week. I love their creamy salmon pasta. It’s just a place to chill out.

Favourite place to catch up with friends? I like Tecom. But we try to change all the time, so we don’t get too used to places. And there’s always something new opening. If we want to relax and chill out, we go to Tecom. If we’re dressing up, we head to DIFC.

Favourite club or music event in Dubai? The Music Room. Last time I went, it was a dubstep and drum ‘n’ bass night. Otherwise, I just play some loud music while I work on my bikes. This is my club.

Favourite international DJ or band? Skrillex is good. But there are always new DJs with new ideas. Most of the time, I listen to radio stations online – it’s a good way of discovering new DJs.

What do you do when you need some ‘me’ time? I come here on my own and work on my bikes late at night. I don’t like staying at home, watching TV.

How would you sell Dubai to someone who has never visited the city? Most people from Europe think that because it’s a Muslim country, it’s very closed-minded, but the truth is far from that. That’s what I try to explain to people.

What’s the secret to success here? Be open-minded and make friends.

Top tip for getting the most out of Dubai? Just relax and enjoy it. There’s always so much to do here. 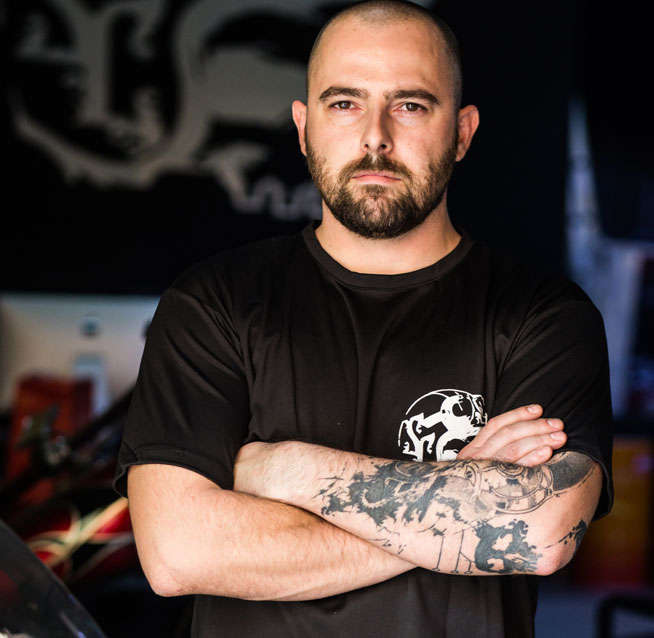 Why: As well as checking out custom bikes, stunts and races, there’ll be live music all weekend, with bands including Behold The Locus and Carl & The Reda Mafia taking to the stage.

How: Taxi to Dubai Autodrome

Heads up: Find out more about Skull Cycles at facebook.com/SkullCyclesDXB or skullcyclesdxb.com.