After filming for months in Vancouver, which Zachary Quinto said was “like a summer camp”, the Star Trek Beyond crew have landed in Dubai to shoot key scenes for the latest movie.

They stopped by the Burj Al Arab today to talk about why Dubai is the right location for the rebooted franchise, and executive producer Jeffrey Chernov said the architecture was a huge part of why they chose the emirate.

“We wanted to find a very vertical city…  a lot of our exterior work is going to be done here”.

While they wouldn’t spill on exact filming locations, Chernov added that Dubai “is going to represent the future of what the Frontier would be like… We came searching for the future, and found it in Dubai”.

(So we’re thinking less desert scenes, more skyscrapers – unless their future’s a dystopic one).

Stars Chris Pine, Zachary Quinto, Idris Elba, Karl Urban, Anton Yelchin and Simon Pegg (who’s also a screenwriter on the movie, man of many talents) were at the Burj to talk Trekkies and the Middle East, as was executive producer Jeffrey Chernov (who worked in Dubai on Mission Impossible), director Justin Lin and screenwriter Doug Jung. 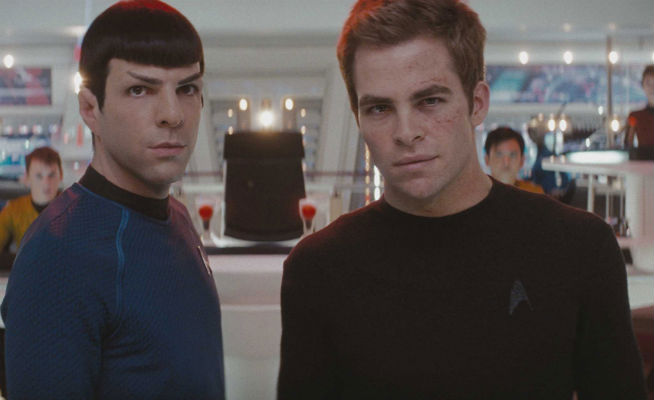 Idris Elba – who is new to the franchise, and is DJing at DXBeach later this month – let slip that principal filming will, for the most part, wrap up here, saying “I’m glad that we finish here in Dubai”.

He also said his October 23 DJ set was post-filming (so we know they’re not going to be here for months like they were in Canada). He then joked to the producer that he was keen for more work in the future – “looking for like a six picture deal please” – he leaned over to say, flashing a smile.

Although Elba wouldn’t reveal whether his character was a villain or a goodie – saying that doing a press conference for a film that’s still being shot was “a little weird” for him – he did say he prefers playing the evil guy (we’re guessing he’ll be the baddie, too).

“Most actors will tell you that writers tend to really flesh out villains more because they just want to get stuff off their chest, and leading characters tend to take a safer line.

“I enjoy the expressions you can take on in a villainous role because I’m such a nice guy in real life,” he said, again jokingly.

Brit actor and screenwriter for the film Simon Pegg said that when writing for the 50th anniversary of the franchise (no pressure) they wanted to marry the traditional Star Trek that people know and love with a “new kind of” Star Trek.

The future of Star Trek “is very much represented by our presence in Dubai,” he explained. 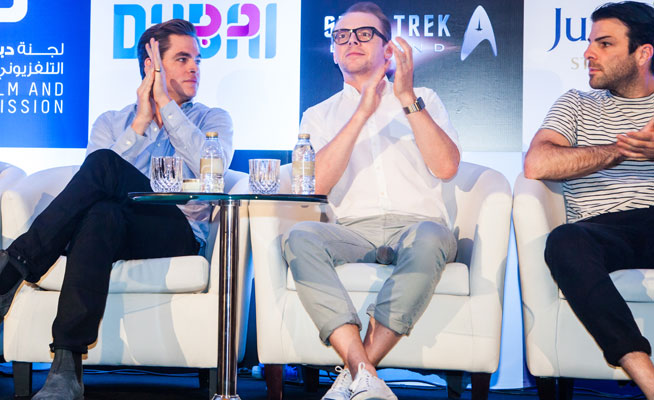 When asked about how excited he was – as a well-documented fan boy – to get the job of helping write the movie, he said: “I do sort of have this reputation of being a bit of a geek – but only in that I love my stuff. But I’m also a professional and I don’t sort of cry and wet myself every time I get a job – well, actually I did with this one.”

Chris Pine, who plays the legendary Captain Kirk, said he was excited to explore the “stunning city” that is Dubai: “I woke up this morning and opened up the blinds and looked out… [Dubai] looks like whatever tomorrow would be. It’s futureland. It’s incredible and I’m happy to be here among my friends”.

On working in the Middle East, Pine said: “Art is a wonderful equaliser and we can always count on art to remind us of our sameness instead of our otherness.”

Kiwi actor Karl Urban, who plays the hilarious Dr. Leonard “Bones” McCoy, has brought his family along with him to Dubai and is taking a few days off to explore and learn about “culture, religion and politics” of the UAE (Karl, if you need any city tips, call us). 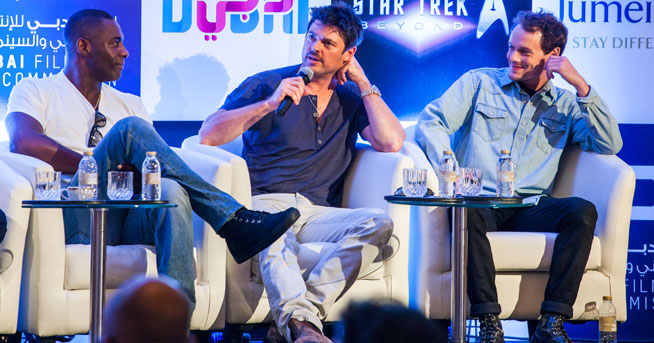 Russian-American actor Anton Yelchin, who plays Pavel Chekov, said he was “fortunate” to have some “down time” while in Dubai. “I’m so fascinated by the city and so excited to be here and – well, this is going to sound so pretentious – but as a student of architecture I’m fascinated by this town. It’s magical to me in a way.”

Chernov said there will be 200-225 extras from Dubai in the film – “the largest gathering of background performers since we started filming”. He added that there will be “somewhat principal players” from the UAE in the film, but that, because filming started in Canada, most of the casting was done there.

“If we had started the movie here it would have been different.”

He said that there were plans for Star Trek to work with Dubai International Film Festival in the future, but that he couldn’t go into it, because “movies have their own heartbeat”.

So what did director Justin Lin – who has directed three of the Fast & Furious films – have to say about the whole process? “Making a movie of this size in the time that was available to us is kind of insane, but I think you can kind of fight it or you can just embrace it.”

“We just hope we don’t disappoint. We just want to make great movies that people want to go to,” said Chernov of the enormous pressure that comes with taking on Star Trek and the extreme expectations of Trekkies.

The cast and crews Instagrams and tweets while in Dubai:

Zachary Quinto’s been snapping both burjs

the subtlety of dubai.

the tallest building in the world.

Idris Elba has brought a strong accessories game to the city

It’s going to be a nice day tomorrow, the Sun is coming out, so, I’m going to sleep in my sunglasses. Always be ahead of the game. Dubai

Glad to be traveling during baseball season because I get @dodgers games everywhere on earth but in LA #wtf pic.twitter.com/fkI5I3eSaj

Culture
Film
News
EDITOR’S PICKS
Bla Bla: Dubai's huge new beach club is set to open this Thursday
READ MORE
16 of the best beach bars in Dubai for sundowners
READ MORE
Watch: A look inside Conor McGregor's Dhs20,000 per night Dubai villa
READ MORE
Where to get the Covid-19 vaccine in Dubai, Abu Dhabi and across the UAE
READ MORE
MOST POPULAR
Where to dine under the DSF lights at The Beach this year
Over two million vaccine doses administered in the UAE so far
White Dubai relaunches two of its best brunches
Big Bad Wolf: The world's biggest book sale is back this January
Would you buy this limited-edition 'gold' Lexus SUV?
YOU SHOULD CHECK OUT
Our website uses cookies and other similar technologies to improve our site and your online experience. By continuing to use our website you consent to cookies being used. Read our privacy policy here.