An exhibition by Spanish artist Maximo Riera that lands in Dubai this Thursday takes its inspiration from the animal kingdom.

Maximo Riera’s furniture is more safari than sitting room. What appears on first glance to be an ordinary – if plush – chair is revealed on closer inspection to have been hewn from a biologically accurate sculpture of a rhinoceros head. The back of another armchair is a perfect replica of the hind legs of a toad. Suddenly our IKEA sofa seems so… suburban.

More…
– 7 pictures that sum up expat life in Dubai

The Spanish artist has taken inspiration from mammals, reptiles and even insects in his efforts to bring a little of the animal kingdom into our homes. Retired Riera, who still paints and sculpts every day at his studio in Cadiz, southwest Spain, starts by reproducing his sketches as 3D digital images, then employs mechanised sculpting tools to precisely replicate each piece from steel and polyurethane, with a leather seat. Each chair is assembled, sanded and painted by hand to achieve the incredibly detailed finish.

The artist, who has teamed up with design boutique Cities to stage an exhibition of his latest work at The Mine gallery in Al Quoz later this month, has created three exclusive pieces for the Middle East. They’ll be unveiled at the exhibition and available to buy at Cities after the showcase.

Riera has said it will be “a privilege” to reveal his work to an audience in “one of the most influential cities in the world”.

Here are eight of his crazy chairs…

The frog (well, half of a frog)

We caught up with the artist to find out more about his wild creations. 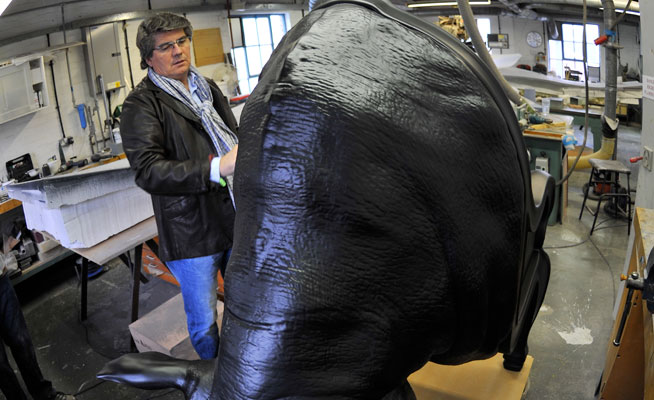 Animals as chairs – where did you get this idea? I have tried to combine both of my biggest joys: nature and art. Nature has been a constant in my life. I need to be surrounded by wildlife, which is the reason I have always lived somewhere near the sea. This series is an homage to the animal kingdom as an attempt to reflect and capture the beauty of nature in each living thing.

What is your aim with these pieces? My intention is to bring the animal kingdom to the urban world, to create awareness in something we are all losing empathy with. This collection gives us an option of admiring what nature is capable of. Personally, what I like the most about the chairs is their realism and theatrical appearance. The chairs almost come to life when you see them in person.

Can you sit in these chairs? Yes, they can be used as a seat but the sculptural character of the composition is more relevant. You have to keep in mind that some of these pieces are more than two-and-a-half metres high. From the beginning I wanted to be faithful to the animal’s physique.

How important was it that the chairs are comfortable? That depends. I consider my creations pieces of art. Functionality in this case, would represent a limitation during the creative process resulting in something totally different to what we have now.

Why did you pick these animals? I normally focus on endangered species for my creations.  I want to point out their uniqueness and how special these animals are. I hope we all realise this before it’s too late.