An All Blacks superstar is coming to the Dubai Rugby Sevens

He’s a man mountain and a rugby superstar, and Kiwi athlete Sonny Bill Williams is flying into Dubai to make a special guest appearance at the Rugby Sevens this weekend.

The 30-year-old All Blacks star, who helped his country win the Rugby World Cup just last month, is coming to Dubai for the Sevens weekend, where we’re promised he’ll “interact with fans”. He’ll be in the tournament’s Teen Zone on Thursday and Saturday afternoons.

*More… Your guide to the Dubai Rugby Sevens*

He’s jetting over as part of the New Zealand Sevens team, although he won’t be playing in this tournament. Sonny Bill is famously (and sometimes controversially) a man of many talents, and has played Rugby League, Rugby Union and even been a champion boxer back in Australasia. Now he’s got his eye on the Olympics, as he’s just been named in the New Zealand Sevens Squad for the Rio Olympics next year, and so will play at least six games in the upcoming Sevens tournament in preparation for the Olympics (but sadly, not in Dubai).

“The thought of winning an Olympic Gold medal is unreal and this gives me a great feeling inside, but this is a long way off and for now I am concentrating on the World Rugby Sevens Series. I am very excited about attending the Dubai Rugby Sevens and whilst I won’t have the opportunity to play in this opening round, I am thrilled about my involvement in the Sevens and being part of one of the biggest Tournaments in the Series, in Dubai”

1. He became a viral superstar during the Rugby World Cup this year

The first was when he ‘gentlemanned’ up and consoled his rival Jesse Kiel after South Africa lost to New Zealand in the tournament’s semi finals: 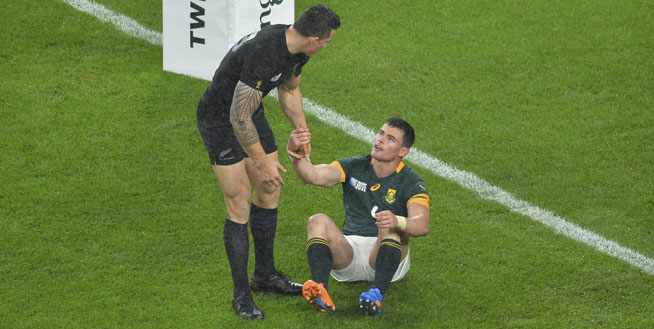 The second was when he gave away his Rugby World Cup winning medal to a young lad that was tackled after running onto the field after the All Blacks won the tournament: 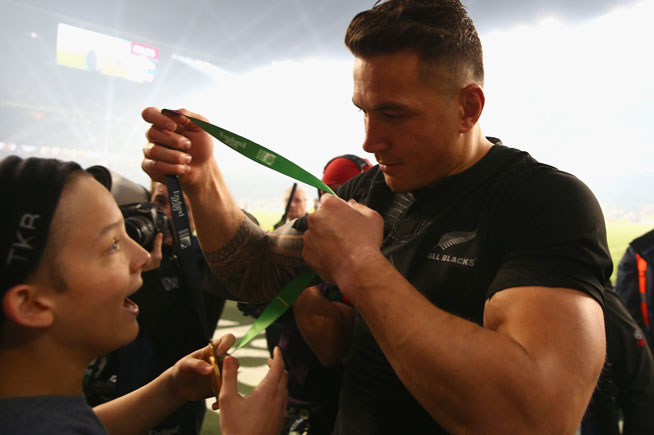 Here’s how it happened:

Sonny Bill Williams converted to Islam in 2009 when introduced to a Tunisian family while he lived in France, and so he’s sure to want to absorb some of the local culture while here.

“I grew up as a Christian like many Polynesians do, but now I’ve become a true Muslim. It’s giving me happiness. It’s made me become content as a man, and helped me to grow. I’ve just got faith in it and it has definitely helped me become the man I am today,” he told CNN in 2013.

He plays Rugby Union for New Zealand, and plays the highest level of Rugby League in Australia, while also heavyweight boxing (he’s won all seven of his professional heavyweight bouts so far). He’s basically a machine.

4. He used to be painfully shy

“The biggest thing to understand about me is that I moved [from Auckland] to Sydney when I was 15,” Williams told The Guardian of his sports career starting when he was so young. “I was all by myself and that was the hardest thing because I like to stay at home with my family. I went from playing muck-around-footie to training intensely six days a week. I was also working as a labourer. I wake up and it’s dark. I get home after training and it’s dark. And I wouldn’t say boo if I went into a room and two people were there. It took me a long while to get my confidence, bro.”

News
Outdoor
Sport & Fitness
EDITOR’S PICKS
UAE holiday dates announced for Eid Al Adha
READ MORE
Emirates extends suspension of flights from India to UAE again
READ MORE
Coming soon: Everything we know about Ain Dubai so far
READ MORE
Khorfakkan set to open new tourist attraction 580 metres above sea level
READ MORE
MOST POPULAR
It's Dhs350 to brunch, stay and play at the What's On Lock In this weekend
UAE weather: Temps of over 50ºC recorded in the shade yesterday
Get a free Expo 2020 day pass when you fly with Emirates
A popular fairy-tale is gracing the stage at The Theatre at Mall of the Emirates in August
UAE petrol prices will increase again in August 2021
Exclusive interview: John Cena on his role as a 'douchey Captain America'
YOU SHOULD CHECK OUT
Our website uses cookies and other similar technologies to improve our site and your online experience. By continuing to use our website you consent to cookies being used. Read our privacy policy here.