Dubai is one of the most architecturally majestic cities in the world, and a new exhibition from two locally-based photographers celebrates that.

Dubai From Dawn To Dusk features the photographic work of Beno Saradzic and Daniel Cheong, and will run from Saturday January 16 to Sunday February 28 at MONDA gallery in Sofitel The Palm. Both of the artists will be there on the opening day (this Saturday) from 11am to 9pm to meet visitors, share tips and take orders for signed limited-edition prints.

*VIDEO: Beautiful timelapse of Dubai fog*
*PICS: 20 photos that show a different side of Dubai*

Daniel Cheong is from both Mauritius and France, and is an expert in ‘digital blending’; while Beno Saradzic from Slovenia is Emmy-nominated and works as a director, editor, producer, 3D artist and photographer.

There are 20 works at the exhibition, here are 11 of our favourites with thoughts from the photographers on why they love them too:

1. The Sentinel by Beno Saradzic 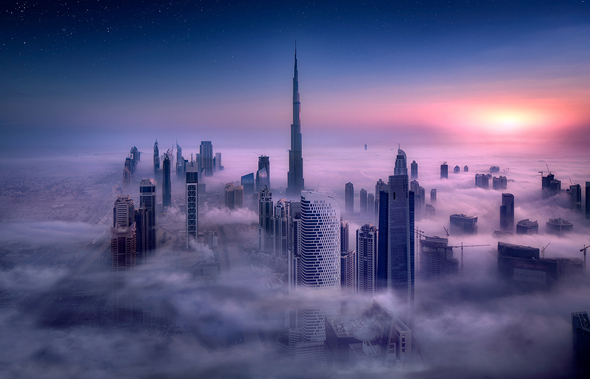 The artist on his work: “Wherever you point your camera in Dubai, there’s always one landmark which dominates the skyline; Burj Khalifa. It is the centre of every cityscape composition and most likely one of the most photographed structures on this planet. Fog – a rare occurrence which completely transforms the look of the city – elevates this capture into the realm of fiction. A dramatic sunrise, a futuristic skyline and a special weather phenomenon; this is one of those scenes every cityscape photographer hopes to capture one day.” 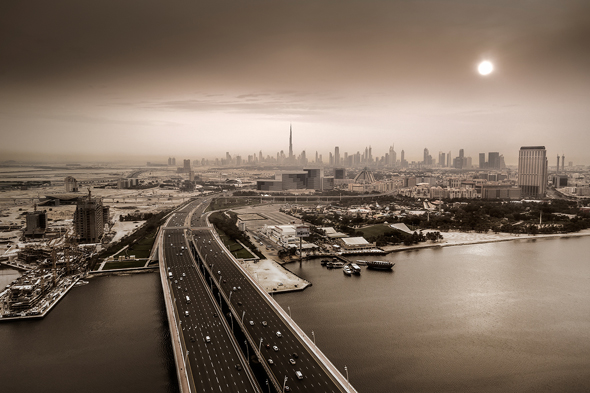 The artist on his work: “This is a rarely seen angle of the Garhoud Bridge, captured from helicopter through an open door. I shot it just hours after a very bad sandstorm hit the city that lasted for days. The sand was still retreating and is visible in the far distance as a muted patch of light. I loved the leading line provided by the highway which takes the eye into the distance towards the skyline, dominated by the Burj Khalifa. I like this shot a lot.” 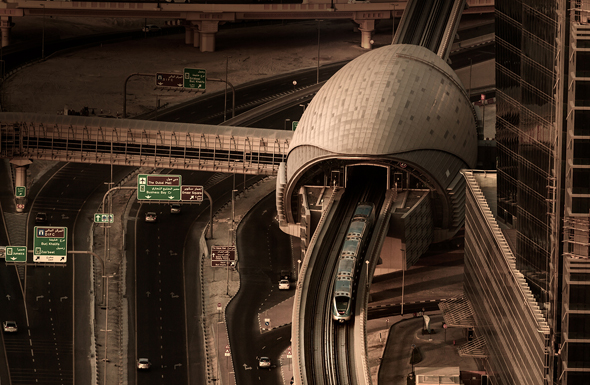 The artist on his work: “Dubai Metro and its futuristic-looking stations is a source of endless photo opportunities. Its design inspires sci-fi references, which I find extremely inspiring.” 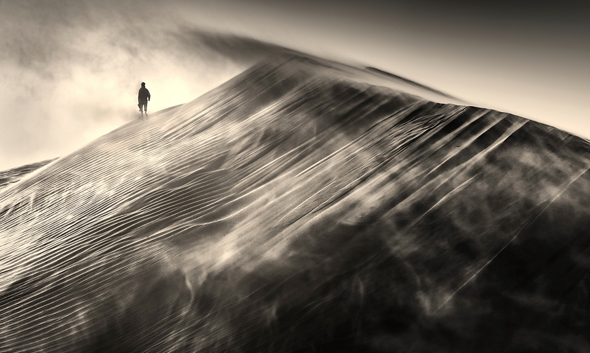 The artist on his work: “I took this shot in the desert just outside of Dubai. The wind created a wonderful dramatic mood that was quite unexpected. The person featured in this frame is my friend, also a photographer, who was seeking to find his perfect shot among the dunes. He had no idea that his presence would help me to make my own perfect shot.” 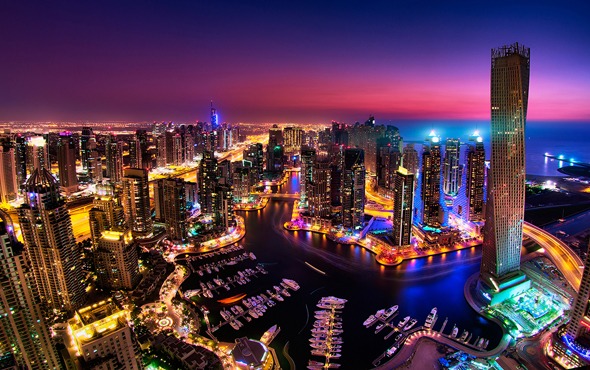 The artist on his work: “If you’re an avid cityscape photographer, then Dubai Marina is the place to shoot. It has everything you want in an urban subject; tall skyscrapers and great varieties and designs, bright and colourful lights, a water canal, bridges, busy highways and roads. My aim was to capture all of these elements and to convey them with a single frame.”

6. A Sea of Lights by Daniel Cheong 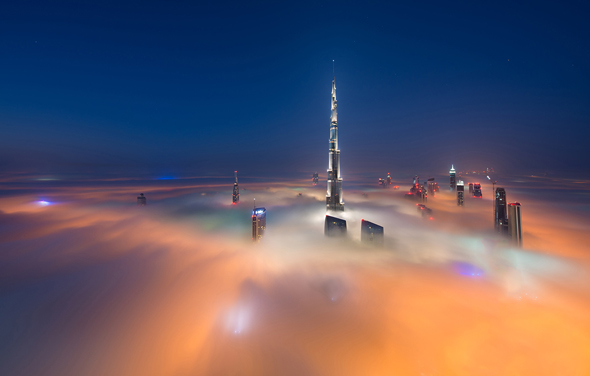 The artist on his work: “The fog during the morning blue hour creates amazing sci-fi sceneries, and the Burj Khalifa adds its own unique presence and futuristic personality. This could be a scene from Star Wars.” 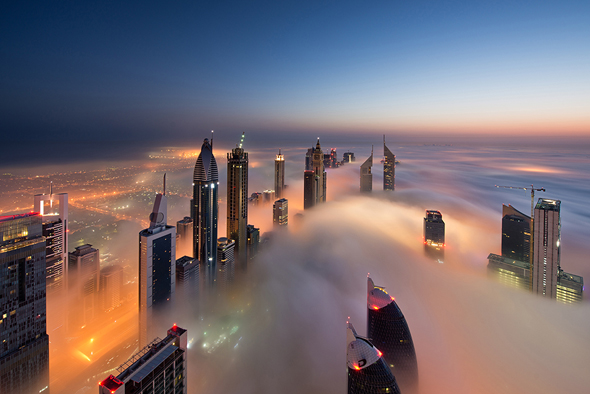 “Dubai city lights make for the most beautiful coloured fog shots, and this one in particular shows great movement of the fog along with a great alignment of the Sheikh Zayed Road buildings towards the morning light. It is one of my favorite pictures, because it conveys the very essence of the early morning experience to the viewer.” 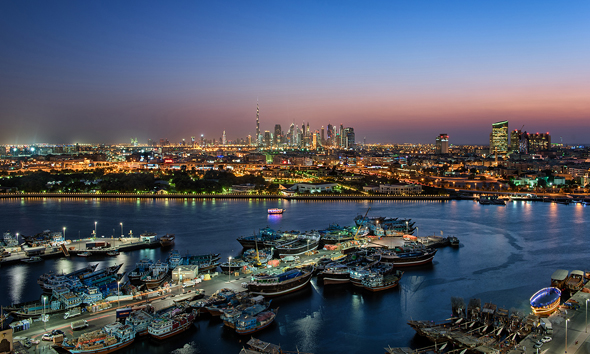 “To those who claim that Dubai does not have history, I like to show them this shot which mixes old and new, past and future very well. One can see the old days very much alive today in the forefront, along with the tallest and most modern building in the distance. I think this diversity contributes very much to the special relationship that most expatriates residents of Dubai build with the city during their stay.” 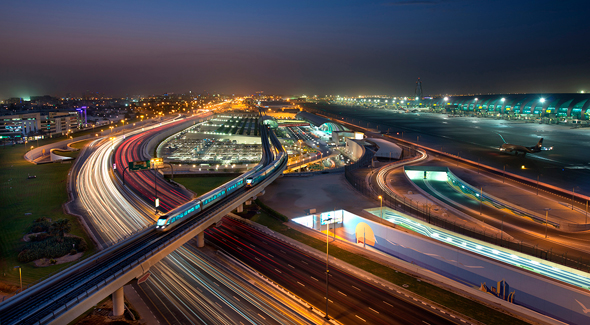 “This picture captures three means of transportation at once: planes, trains and automobiles. It reveals the hub status of Dubai. The technique used for this composition consists of mixing long and short exposure shots. I felt very lucky to capture two trains at the same time in the forefront: they look like they are moving right in front of us, just like the cars, and I can still hear the buzzing sound of the place by just looking at the picture.”

“With its variety of elements, shapes and lights, Dubai really is a paradise for photographers. This is the best view from the Burj Al Arab helipad, and I loved creating this contrast, or combination, between the beach in the forefront and the dense Downtown Dubai in the distance.” 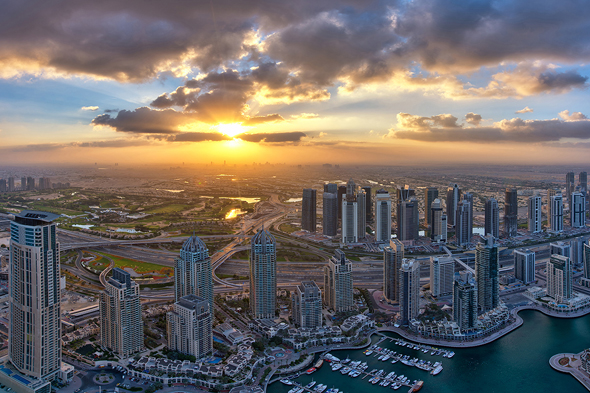 “I captured this dramatic sunrise after an amazing foggy night in Dubai Marina. This is a very high megapixel panorama (over 70Mpix), allowing a print to be made up to about 2 metres wide with great detail.”

– For more on the exhibition, head here.

Art
Culture
News
EDITOR’S PICKS
Ain Dubai will open with fireworks, live music and a drone show
READ MORE
Incredible Aura SkyPool to open in Palm Tower this November
READ MORE
Brit Grand Slam hero Emma Raducanu confirmed for Mubadala Tennis
READ MORE
What’s On Nightlife Awards 2021: Here are the nominees...
READ MORE
MOST POPULAR
Here's what you'll be eating at SushiSamba when it opens in November
Chic Mediterranean beach bar Ula is now open on the Palm Jumeirah
7 art exhibitions in Dubai to check out this October
27 of Dubai's best rooftop bars with some epic sunset views
Win at Monday with unlimited sushi and an open bar at this chic soiree spot
YOU SHOULD CHECK OUT
Our website uses cookies and other similar technologies to improve our site and your online experience. By continuing to use our website you consent to cookies being used. Read our privacy policy here.