The Dubai Canal construction that stretches from Business Bay to Jumeirah is ticking along nicely, and a new bridge opened yesterday that will help ease traffic in the Al Wasl area.

The finished bridge (pictured above) serves traffic going from Al Athar Road toward Al Hadiqa Road and Sheikh Zayed Road. This means that when you turn right off of Jumeirah Beach Road near what was Beach Park you’ll now have easier access to Sheikh Zayed Road (Al Hadiqa Road is the road that runs parallel to Safa Park and leads to SZR).

This bridge will serve this traffic flow in addition to the existing lanes of Al Wasl Road for now, which all remain open, so we should see an easing of congestion.

This isn’t the only update we have on the canal: Mattar Al Tayer, the director-general and chairman of the Board of Executive Directors of RTA, said the overall construction for the Dubai Canal is now 80 per cent complete (which shows real progress, as it was 61 per cent complete in January).

This Google Maps image shows the old route that would take you from Al Athar Road to Hadiqa Road: 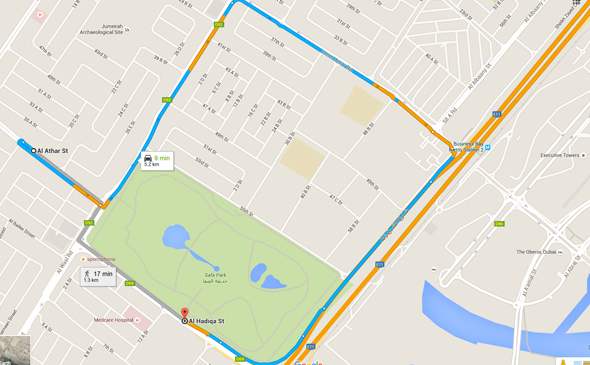 Here’s an image from the RTA that shows the work that’s just been completed – the bright pink line shows the route of the new bridge that opened on Saturday: 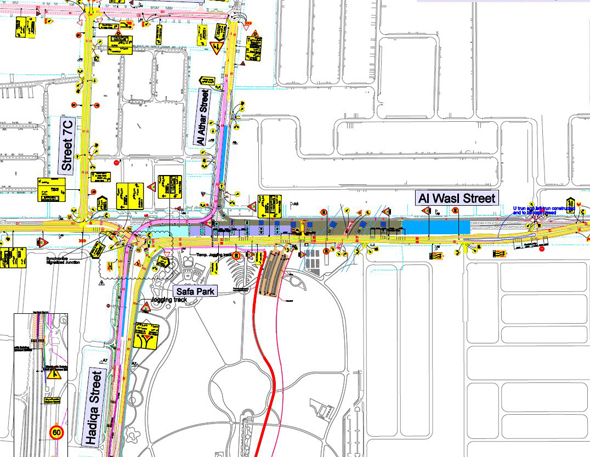 The bridges on Jumeirah Beach Road and Al Wasl Road that will allow the canal to flow through the area are moving along nicely. Both these bridges will rise 8 metres above the Canal so that boats can pass underneath them. The RTA has just announced that the bridge on Al Wasl Road (the construction near Safa Park and Wasl Square) is 90 per cent complete, and that we will all be driving on the new road by May. Meanwhile, the bridge on Jumeirah Beach Road is 35 per cent complete, and is expected to be open by the end of July.

Another road being built as part of the Dubai Canal project is a bridge that will serve outbound traffic towards Al Hadiqa Road (so it will run in the opposite direction from the bridge that’s just opened). There will also be a bridge leading to the proposed peninsula that will double the beach front in Jumeirah Beach Park.

Other construction currently happening includes the building of three pedestrian bridges linking the two shores of the canal and the four marine transit stations, as well as the drilling of the water canal stretching 3.2 km (which is expected to be complete in September).

– ‘The Walk’ at Dubai Water Canal will connect with the current Jumeirah Beach running track, meaning a 7km-long continuous track for joggers.

– The area will be very safe, due to smart surveillance cameras focused on pedestrians with face-recognition technology.

– Property developments will run along both banks of the canal – with 5,345 residential units planned, as well as 948 hotel rooms. The areas will be called Gate Towers, Jumeirah and Peninsula.

– There will be four residential towers linked with Safa Park, as well as 211 residential units right on the water.

– Jumeirah Beach Park will reopen, and the stretch of beach on the much-loved, currently-closed park will extend by one kilometre as it will run out over the Canal’s peninsula. The peninsula area will also feature 60 marinas, 1,817 residential units, 957 five star hotel rooms and 347 retails outlets and restaurants.

– The Gate Towers bridge at the entrance of the canal to the Arabian Gulf will feature a three-level mall that will be built above the Canal and span 300,000 square metres. The mall will hold 434 retail outlets and restaurants. The roof of the mall will be a park – yes, as in greenery, and it will look out over Safa Park.