From live music in Tecom to cigars and Sinatra at the St Regis, here’s our pick of the best new bars.

When it comes to nights out in Dubai, we all have our favourite watering holes in the city and it’s easy to become a creature of habit.

However, with so many great new venues popping up, now’s the perfect time to step out of your comfort zone. Here’s our pick of the best new bars worth checking out. 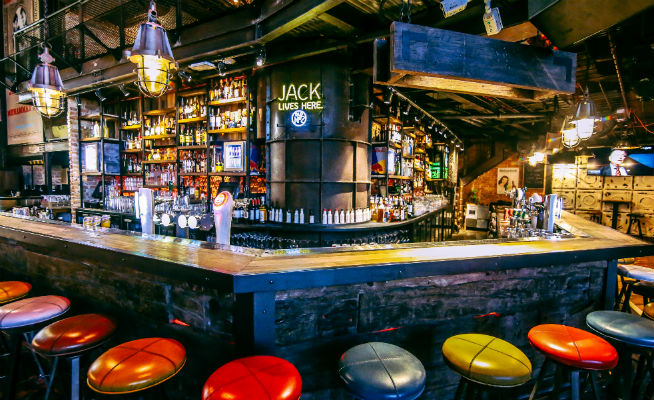 Between the glitz of Downtown and glam of the Marina, an evening spent partying in Tecom is rare. Raising it from underdog status, however, is Lock, Stock & Barrel, which blast open its doors last month, with a cocky swagger and one very strong look.

Stepping out of the lift, the first thing we noticed was, well, everything. There’s a distinct New York fire escape theme, mixed in with open brickwork, vintage movie posters, shipping containers, a wall of speakers and an army of handsome denim-clad bar staff. It really has it all – even a whack-a-mole game in the toilets.
The two bars are stocked with craft ales and cocktails, and it already has its own house band, happy hour and ladies’ night with a brunch on the horizon. There are dozens of screens showing the latest sporting action and despite only opening last month, it’s rammed on the weekends.

Lock, Stock & Barrel is clearly confident, but it’s not surprising considering the brand falls under the same umbrella as the team behind Asia Asia and Q43. We saw touches of the latter in the odd pool table and secluded lounge areas on the mezzanine floor. Other than that, Lock, Stock & Barrel is completely rocking its own identity, equally suited to the well-heeled as it is those dressed in band T-shirts and trainers – even flip-flops are acceptable on Saturdays and Sundays. 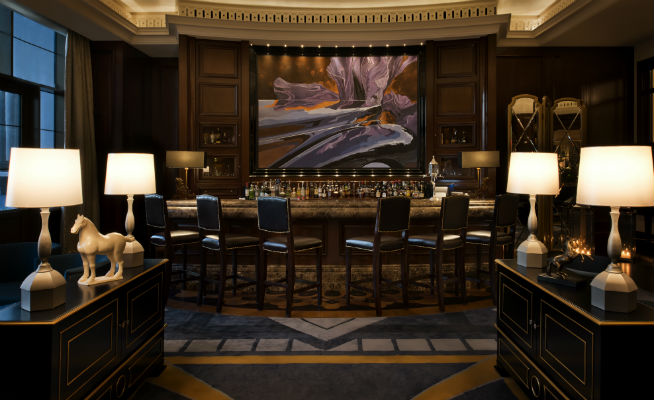 You know that conversation starter, where you list the famous people you’d invite to a party? And that list includes Frank Sinatra, Don Draper and James Bond? OK, that might be a long shot – but if such an evening were to happen, the St Regis Bar is where you’d host it.

There’s a masculine elegance to this bar, with its dark, muted colours, leather sofas, and smooth, old-fashioned soundtrack (Sinatra features heavily). The shelves are lined with leather-bound books, the walls decorated with equestrian portraits and there’s a separate, equally opulent smoking area where you can retire to enjoy a cigar.

We opted for a sofa by the (unused) fireplace to sample the menu. Traditionally, every St Regis invents its own version of the Bloody Mary, and Dubai is no exception – the Golden Mary mixes rose-infused vodka, date paste, yellow tomato juice, pickled jalapeños and a very Dubai sprinkling of edible gold leaf.

The bar nibbles are just as high-end. We loved the decadent barbecued short ribs and mac & cheese croquettes, with a sweet and smoky Japanese tonkatsu glaze that cuts through the gooey cheese perfectly. Although it makes the perfect post-dinner date spot, you could easily spend an entire evening relaxing in the quiet surrounds. As our dining companion remarked over our second game of chess, “I like being in a bar where you can actually hear yourself talk.” And how rare is that in Dubai? 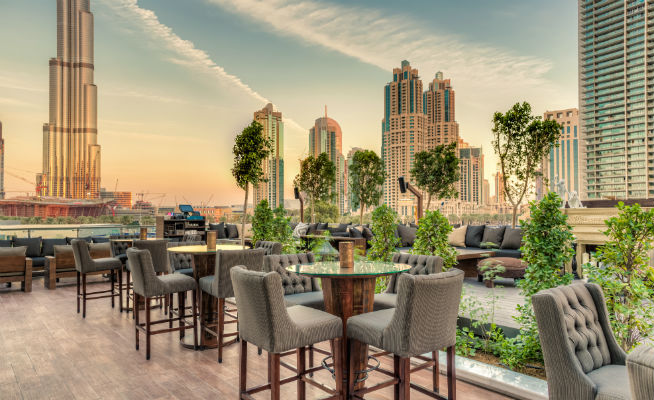 Everything we know about treehouses, we learned from the movies. After watching coming of age classics such as Stand By Me, we were anticipating lofty heights, lots of wood, and possibly a ladder when we turned up at Treehouse in Business Bay.
As it turned out, there was no ladder involved. Instead we took the elevator from the Taj Hotel lobby, strolled across a pretty pool deck, and scaled an (admittedly rather steep) staircase to reach the bar itself.

Treehouse did live up to expectations on the wood front. It’s everywhere, from the plank flooring to the chunky tables, sofas and stools. The cushions are all in neutral shades of tree-trunk brown, and ornate trees dotted around keep things suitably leafy. In terms of the view, this new spot is streets ahead of Gordie and Vern’s secret hideout. The pals could look out at some perfectly pleasant Oregon woodland, but that can’t really compare to the unobstructed view of the Burj Khalifa from Treehouse.

Perhaps in recognition of its close neighbour’s attention-seeking qualities, Treehouse has kept the décor stripped back and simple – and it provides the perfect contrast to the unashamed flashiness of the world’s tallest building.
All of this adds up to a pretty spectacular setting for a sundowner, and at Treehouse, they’re of the expertly mixed cocktail variety. We recommend the signature Elixir Of Life. 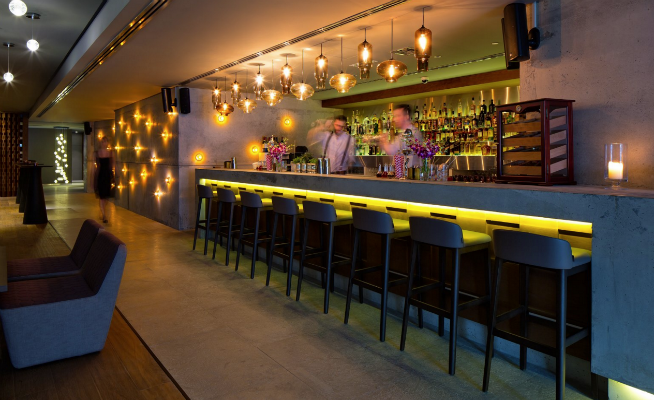 In all the excitement over chef du jour Jason Atherton’s Marina Social opening in Dubai, it’s easy to overlook the really rather good bar that came along with it.

Every dish on the menu at Marina Social is designed to get people talking, from the mushroom soup presented like “tea and toast”, to the duck and foie gras Social Dog. It turns out the same applies at the Social Room, the bar next door.

One cocktail arrived garnished with a picture of Freddie Mercury. Another was poured from a mini flagon into a frosted glass at the table. A third was served in its own ice bucket, complete with fruit and flowers. Here, every cocktail is a conversation-starter.

Lots of care and attention has gone into creating each drink – not to mention a healthy dash of humour. The Cereal Killer features Cheerios milk and is served in a milk carton-shaped glass, while rubber ducks bob merrily on the surface of the White Star Line Punch Bowl.

The all-important bar snacks are similarly elaborate. Think Sicilian olives and smoked almonds instead of peanuts, and squid ink crackers instead of crisps. If you need something heartier to go with your expertly crafted cocktail, the aforementioned Social Dog – one of the 50 best things we ate in 2015 – is on the bar menu too.

5. The Pub at Stereo Arcade 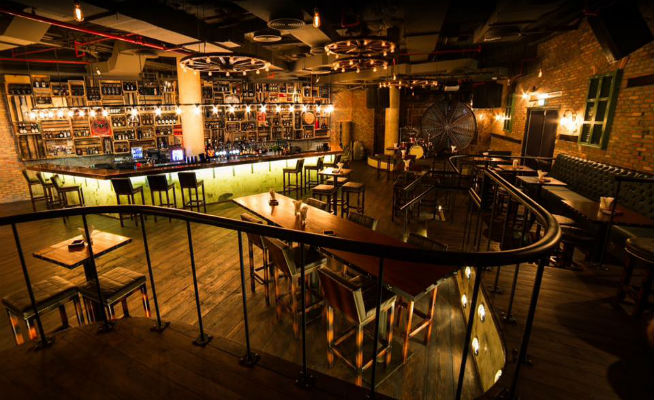 Let’s face it: if you love rock, most of Dubai’s bars aren’t really for you. So fortunately for those of us who like music you can wail on your air-guitar to, there’s The Pub at Stereo Arcade.

Nostalgia plays a big role in this rock bar. To enter, you must pass through the arcade and its collection of custom-built machines loaded with classic games, such as Street Fighter II and Mortal Combat. Open the doors to the bar itself and you’ll be hit by a wave of tunes – anything from Nirvana to Led Zeppelin to the Rolling Stones – either blasting from the sound system or covered by a resident band.

Stereo Arcade has two award-winning local acts making regular appearances: Jet Lag and the Boxtones . When we saw the latter, their nostalgic rock covers took us right back to our mosh pit days, as we tucked into some quality pub grub (the pizza spring rolls and duck sliders were darn tasty).

A lot of care has been taken with the decor, with antique Beiruti cartwheels hanging from the ceiling and repurposed fruit crates doubling as shelves behind a gorgeous copper bar. If you’re wondering about that giant fan behind the stage, it’s an old cooling unit from a defunct factory.

But the coolest part is that it’s relaxed without being sloppy; somewhere you can wear your finest threads or jeans and Converse, and still feel at home. 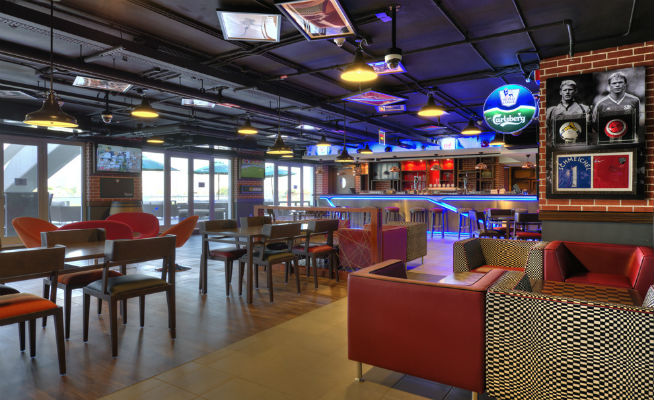 If you want somewhere a little calmer to watch your favourite games, try Kickers in Sports City. Overlooking the astroturf pitches, this bar has two areas: one with alcohol and one without.

Happy hour is Sunday to Thursday from 3pm to 6pm during which you get two drinks for the price of one. Lots of screens mean you’ll never be far away from the rugby, so you won’t get a crick in your neck as you try to peer past that 6’5” giant standing right in front of you.

Arguably the most perplexing new bar opening, all we know about HOBO so far is that it’s only open on Mondays, and entry is through a mysterious, anonymous-looking car park somewhere on Sheikh Zayed Road. If you want to know more, stay in the loop by checking out their Instagram page.

Bars
News
Nightlife
EDITOR’S PICKS
What’s On Nightlife Awards 2021: Here are the nominees...
READ MORE
It's back! What's On Lock In returns to Media One Hotel
READ MORE
Arts and culture: 5 spots we can't wait to visit at Expo 2020 Dubai
READ MORE
UAE petrol prices are set to decrease in September 2021
READ MORE
MOST POPULAR
This longstanding Palm Jumeirah brunch is back and better than ever
Custom-made lipstick, foundation and concealer launches in Dubai
Abu Dhabi mega project Guggenheim set to open in 2026
Meatless mania sweeps the UAE as Impossible Foods makes its debut
Glamping in style is back at Longbeach Campground
YOU SHOULD CHECK OUT
Our website uses cookies and other similar technologies to improve our site and your online experience. By continuing to use our website you consent to cookies being used. Read our privacy policy here.