Light rain and heavy clouds across Dubai this afternoon

Rain and low temperatures are expected across the emirates this afternoon, with drops of rain felt in Dubai from lunchtime.

Late April is normally a dry time of year, but heavy cloud cover has blanketed the UAE this afternoon, and rainfall has hit Dubai.

At 1.57pm the National Centre for Meteorology Services (NCMS) put out a bulletin warning of “blowing dust”, “decreased visibility” and “towering clouds associated with rain”.

This satellite image shows the rain over the UAE at 4pm on Sunday – light blue is drizzle, blue means light rain and the small patch of yellow in the centre is moderate rain: 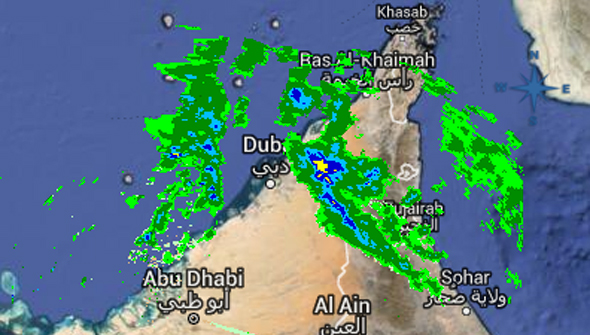 The temperature today is also lower than usual, with lows in coastal areas hitting 20 degrees Celsius and the day’s high a moderate 32 degrees. Relative humidity will hit a high of 90 per cent today according to the NCMS.

And tomorrow? Well the NCMS thinks the cloudy conditions will stick around on Monday, but they haven’t yet specifically forecast rain.

Why does it seem to be raining so much this year? Well, according to The National, some scientists have theorised that it’s because of El Niño, a recurring weather phenomenon that sees a warming of the Pacific Ocean (and means unusually hot summers in places like New Zealand and Australia).

Scientists at the UAE’s NCMS have found a possible correlation between this warming of the Pacific and higher levels of rain in a year in the UAE. They’re continuing to investigate the link.

There’s also the fact that the NCMS continues to work on cloud seeding in order to lower temperatures in the UAE – this process sees pilots injecting clouds with salt so that they produce rain. (Fast fact: The pilots often find themselves ‘chasing’ the exact type of cloud they need before it disperses).

Here are some social media reactions to this afternoon’s rain…

We can empathise with this one…

Why does it rain whenever I wash my car ?!

rain over Shiekh Zayed Road and Al Rawia in #Dubai@NCMS_media

News
EDITOR’S PICKS
Ramadan in Dubai: 48 iftars to try
READ MORE
Where can Dubai residents travel? Check out these 14 destinations
READ MORE
Rumours, facts and reveals: New Abu Dhabi bars and restaurants
READ MORE
UAE announces reduced working hours for Ramadan 2021
READ MORE
MOST POPULAR
UAE: Strict rules may soon be in place for those who aren't vaccinated
Review: Rainforest camping at The Green Planet Dubai
The rules for children wearing face masks have been updated in UAE
Etihad sale: Surprise gift boxes and a chance to win 50 times your airfare
Break your fast in style at W Dubai - The Palm this Ramadan
YOU SHOULD CHECK OUT
Our website uses cookies and other similar technologies to improve our site and your online experience. By continuing to use our website you consent to cookies being used. Read our privacy policy here.