Nothing says England like a good old roast dinner, so what better way to mark St George’s Day than with a tasty plate of roast beef and all the trimmings?

St George was, according to legend, quite a guy. The patron saint of England, folklore suggests that during his time as a soldier in the Roman army, he slayed a dragon and saved a princess – an achievement that sees April 23, the accepted date of his death in the year 303, celebrated in countries as far ranging as Serbia and Canada, and cities from Rio de Janeiro to Beirut. Also known as the Feast Of Saint George, it’s a day when filling your boots with English fare is a perfectly acceptable and positively encouraged pastime. So with that in mind, here’s our list of Dubai’s best roast offerings – we’d like to think Saint George himself would approve… 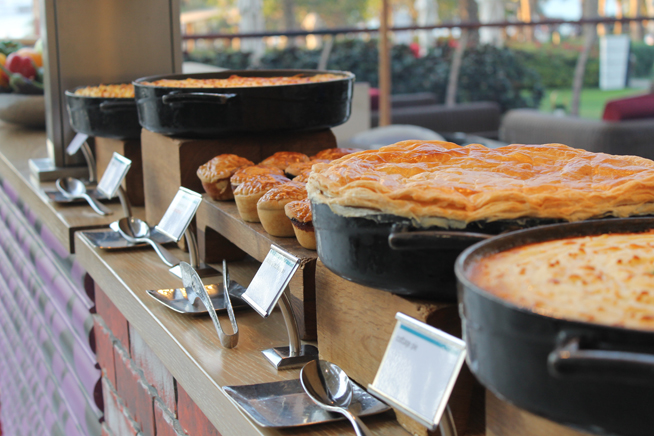 A French restaurant perhaps, but Latest Recipe Dubai does a fine line in good old English fare at its weekly English roast event. There’s a selection of delicious meats, served carvery-style with more sides than you can shake a carrot at, plus numerous salads, a fish selection, cheeses, desserts and live cooking stations. With the option to fill your plate as many times as you can manage, think of it as a Blighty-style brunch, but on a school night. 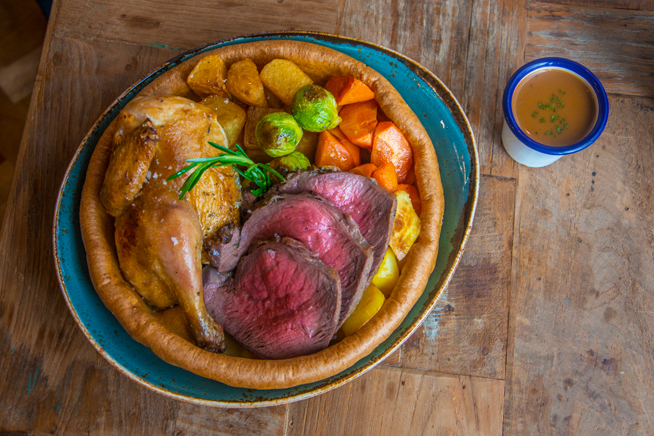 Inspired by New York’s industrial live music venues, new bar Lock, Stock & Barrel might be super cool, but that hasn’t stopped it setting its sights on claiming the best roast in Dubai title. Choose any two from a selection of beef, lamb and chicken, and they’ll be piled into a giant Yorkshire pudding and served to you with proper homemade gravy and a pile of tasty trimmings. 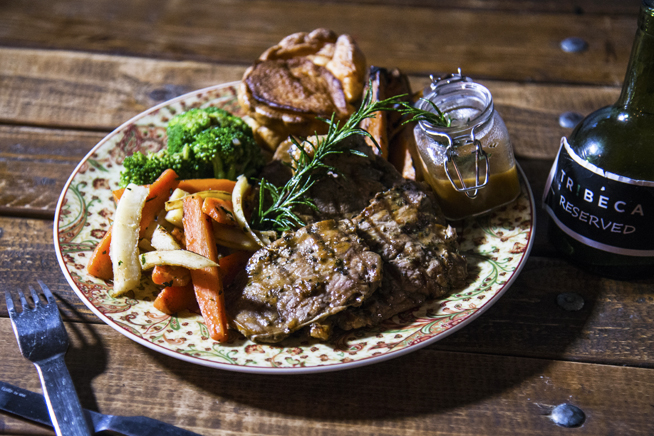 Tribeca might feel laidback, but with a focus on only the best organic produce, it takes its food seriously. Aiming to emulate the proper family lunches of many a childhood, its retro roast offers a choice of beef or chicken, or both, served with heaps of organic veggies, homemade Yorkshires and “as much gravy as you can manage”. We do love a challenge… 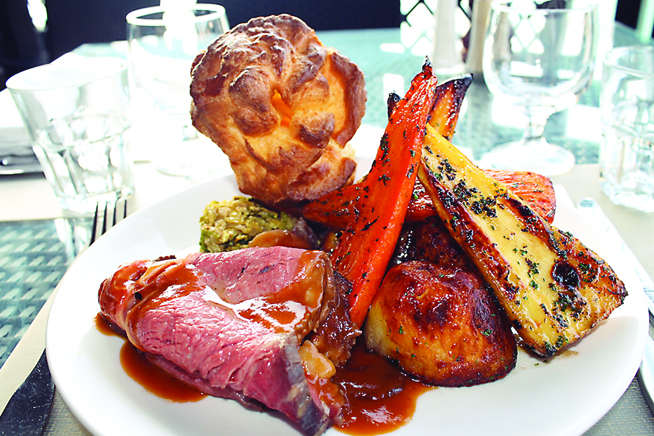 The roast with a view

The Rivington Grill’s views of the Dubai Fountain are among the best in town, so it’s no surprise that its roast lives up to the setting. The British restaurant’s slow-roasted rib of bone-in beef, served with duck fat roasties, seasonal veg and Yorkshire puddings, sells out every Saturday, so we recommend you don’t turn up too late in the day. 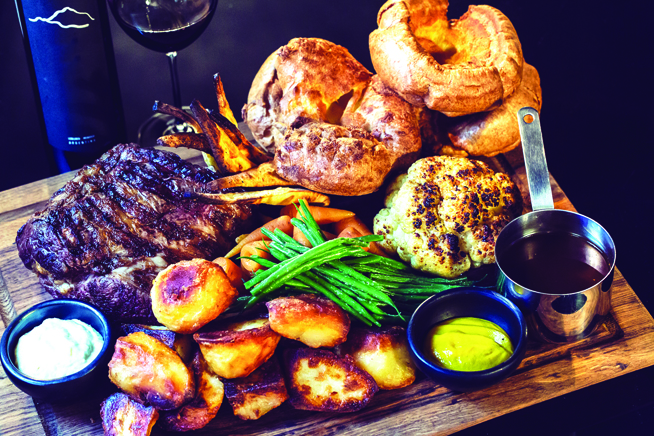 Few places take meat more seriously than Gaucho, and its namesake roast doesn’t disappoint, featuring a choice between two cuts of beef or a whole spatchcock chicken, served with roast potatoes, veggies and homemade Yorkshire puddings. Hungry? Go the whole hog with the Asado and tuck into two cuts of beef, chicken and homemade beef chorizo, or opt for the unlimited beef and Argentinian wine package and loosen that belt now… 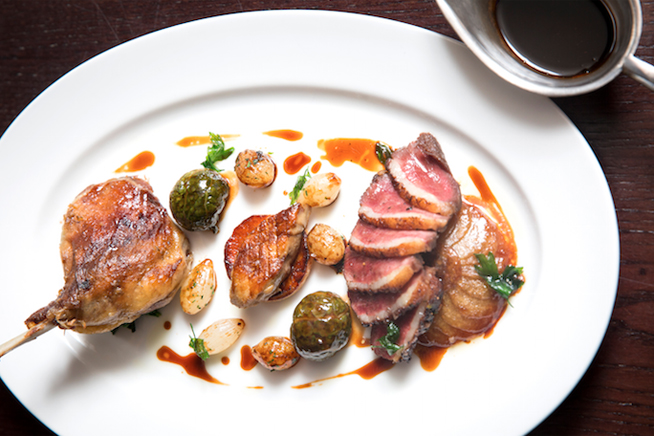 As quintessentially English as afternoon tea, The Ivy has high expectations to live up to, which presumably is why it has stepped up its roast game. Forget beef, we’re talking roast duck breast here, served with confit duck leg, foie gras, mushrooms and boulangere potatoes. 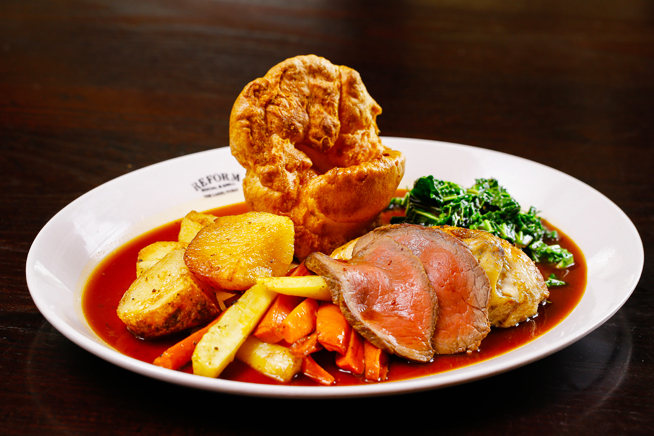 A firm favourite with Dubai’s families thanks to its children’s playground and onsite ice cream parlour, Reform Social And Grill is ideal for those looking to pass down tradition without slaving over a hot stove. The gastropub’s traditional roast features a tasty topside of beef, roast potatoes, heaps of veggies and a giant Yorkshire, with lashings of gravy.

Eat & Drink
Restaurants
EDITOR’S PICKS
What’s On Nightlife Awards 2021: Here are the nominees...
READ MORE
It's back! What's On Lock In returns to Media One Hotel
READ MORE
Arts and culture: 5 spots we can't wait to visit at Expo 2020 Dubai
READ MORE
UAE petrol prices are set to decrease in September 2021
READ MORE
MOST POPULAR
This green Abu Dhabi space will stage a pub garden with live music
Treat yourself with the ultimate comfort food at Denny's
8 spots to enjoy a free cup of coffee this weekend
It looks like Khalid and Lewis Capaldi are headlining the Abu Dhabi F1 concerts
Stunning mountain retreat Six Senses Zighy Bay is reopening in Oman
YOU SHOULD CHECK OUT
Our website uses cookies and other similar technologies to improve our site and your online experience. By continuing to use our website you consent to cookies being used. Read our privacy policy here.