Cycling royalty to ride in the capital

Some of the biggest names in professional cycling are set to ride in the capital next month, in the second Abu Dhabi Tour.

The road race takes place over four days, running from October 20 to 23, and the list of competing riders features several who won medals at the Rio Olympics, including Brits Mark Cavendish (who is also the Tour’s official ambassador) and Sir Bradley Wiggins, plus Italian star Elia Viviani (who rides for Team Sky, the same team as Tour de France winner Chris Froome). Belgian legend Greg Van Avermaet, another winner in Rio, will also race in the emirate for BMC Racing Team. 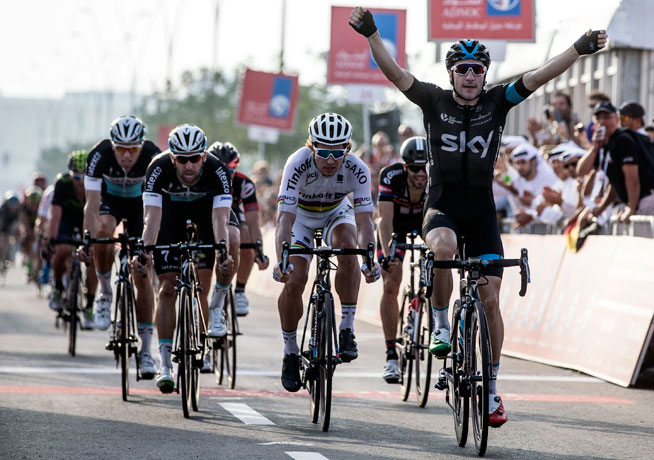 In total, 18 teams will compete in the second Abu Dhabi Tour – 11 of those are some of the sport’s biggest UCI World Teams such as Team Sky, Moviestar, Astana Pro Team and Team Giant-Alpecin.

Other big names who will be riding during the four-day event include Spaniard Alberto Contador, one of only six riders to have won all three of the sport’s biggest events – the Tour de France, Vuelta a España and the Giro d’Italia. Fellow Italian Vincenzo Nibali, another who has won all three of cycling’s biggest races, will also be taking part.

The race covers 555km in four days. Stage one takes place in the Western Region at Madinat Zayed and Liwa, the second stage takes in the capital city itself, with the pros rolling past Saadiyat Island, Yas Island, Al Reem Island, the Sheikh Zayed Grand Mosque and Adnec. Stage three takes place in Al Ain and finishes with a tough 10km climb up Jebel Hafeet, and the last stage takes place at sunset on the city’s F1 track at Yas Marina Circuit.

Want to know more about the race? You can read a full preview of the 2016 Abu Dhabi Tour in the October edition of Cyclist Middle East magazine, available in all good stores from October 1.

News
Outdoor
Sport & Fitness
Things to do
EDITOR’S PICKS
Ramadan in Dubai: 48 iftars to try
READ MORE
Where can Dubai residents travel? Check out these 14 destinations
READ MORE
Rumours, facts and reveals: New Abu Dhabi bars and restaurants
READ MORE
UAE announces reduced working hours for Ramadan 2021
READ MORE
MOST POPULAR
Review: Rainforest camping at The Green Planet Dubai
The rules for children wearing face masks have been updated in UAE
Etihad sale: Surprise gift boxes and a chance to win 50 times your airfare
Break your fast in style at W Dubai - The Palm this Ramadan
Yoga and art combine in Dubai's newest immersive fitness class
YOU SHOULD CHECK OUT
Our website uses cookies and other similar technologies to improve our site and your online experience. By continuing to use our website you consent to cookies being used. Read our privacy policy here.