Police interrogate YouTuber who threw an iPhone off the Burj Khalifa

Most people who’ve got their hands on a brand spanking new iPhone are still cradling it like a newborn baby.

Everyone but YouTuber TechRax, that is.

The vlogger, who’s famous for videos which show him destroying technology, made Dubai the backdrop of his latest stunt – but it’s landed him in a spot of trouble with the law.

TechRax cooked up a bit of an online storm several days ago after posting a video of him throwing his iPhone 7 off the top of the Burj Khalifa.

After dropping it from the 148th floor (past a sign warning visitors not to put objects past the glass), he can be heard saying: “This thing is fried. It’s just completely destroyed. The impact hit it to the point where I can’t track it.”

Shortly after the video was published, commenters flooded the Ukranian vlogger’s page with criticism, admonishing him for pulling such a risky stunt.

The dangerous move has since scored him an interview with the cops.

WHAT DID DUBAI POLICE SAY?

Law enforcers interrogated TechRax as the impact from an iPhone from that height could’ve caused some serious injuries to those below.

They made TechRax sign a statement saying that he would not repeat such incidents that endangered his own life and those of others.

If he repeats such acts, he will be liable to penalty or punishment.

HOW DANGEROUS WAS IT?

Remember the ‘if I dropped a penny from the Empire State Building, could it kill someone?’ question?

Well, TV show Mythbusters disproved the theory. It would just hurt a little.

However we can’t imagine taking an iPhone 7 at terminal velocity to the head would be a great way to start the week.

He might’ve well just shot an iPhone out of a cannon at passing pedestrians.

WHAT IS TECHRAX’S CHANNEL ACTUALLY ABOUT?

His YouTube hub centres itself around destroying expensive technology.

Sure, it’s entertainment, but it’s just so, so wasteful…

One of his videos shows him smashing 30 different iPhones with a hammer. Why? Because it’s TechRax.

TechRax… sick of getting sassed out by Siri. 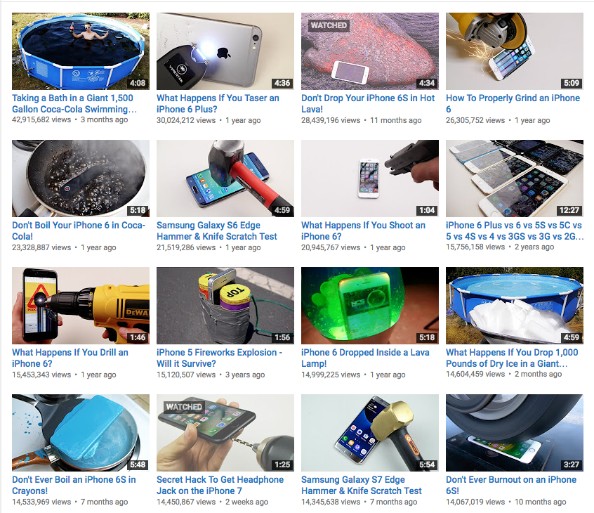 They’re strangely tempting to watch, but if it’s endangering those around you? Not cool.