Is she? Or is it all just a mirage?

So we all know that Gigi Hadid is in Dubai today – she’ll be in the Dubai Mall at 4pm to promote work she’s doing with fashion brand Tommy Hilfiger.

But, what we didn’t know was that Kendall Jenner was joining her on the  trip.

The model from the Kardashian clan may have joined her BFF Gigi on the trip, as this photo of her standing near the Burj Khalifa has just been posted on Instagram:

That said, some publications, including The Sun in the UK have claimed that DJ Neptune, the man in the photo, has faked the snap, Photoshopping Kendall in. (His sunglass reflection does look mighty empty.)

If he has ‘shopped her in? A for effort. But fact is, Gigi Hadid is definitely here.

DJ Neptune is the CEO & Co-Founder of Next Class Agency, a company that works with celebrities in the city (and has a high-profile four followers on Instagram).

Remember, Kendall’s big sister Kim Kardashian was supposed to be visiting this week to give a makeup masterclass on Friday August 14, but she had to postpone the event after being horrifically robbed at gunpoint in Paris a few days ago.

Those who had already bought a very-pricey Dhs6,127 ticket for the event can either claim a full refund, or attend the rescheduled event. When is the new date? It hasn’t been confirmed yet, but we’ve heard it will be announced any day now, and we’ll keep you updated.

Also, if Kendall is here, this wouldn’t be the first time Gigi and Kendall have hung out in Dubai. They spent New Year’s Eve here together to ring in 2015. And while in the UAE, they visited the beautiful Sheikh Zayed Grand Mosque: 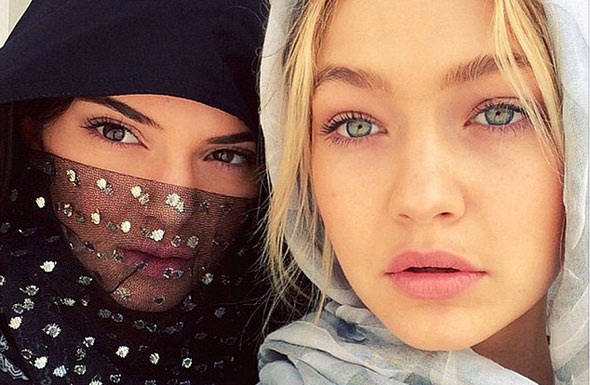