Almost half of Dubai's shawarma supply is being cut off

Who doesn’t love a late night shawarma? It’s one of the great Dubai institutions: from Beach Road to the alleyways of Deira and even in IKEA, this city loves a tangy meat sandwich.

But, wait for it, almost half of all shawarma outlets in Dubai are being forced to stop selling the stuff after they failed to meet the Dubai Municipality’s new hygiene rules. The struggle is real.

The biggest change is that you won’t see the meat outside in roadside stalls any more, as all shawarma skewers have to now be stored inside (so the meat doesn’t get covered in dust and dirt). 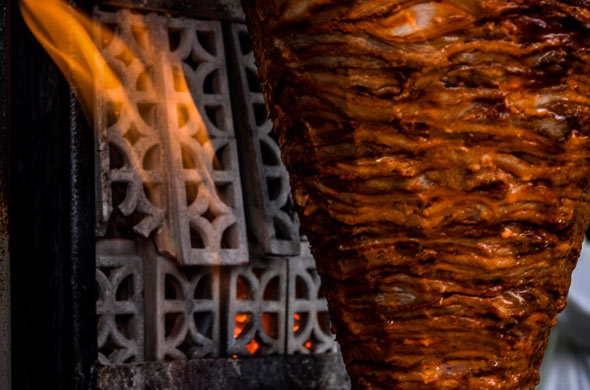 Well, at least from now on when we eat a shawarma at 2am we can be safe in the knowledge that it’s got a hygienic gold star (which is always a plus).

In May, Dubai shawarma stands and shops were given six months to implement new hygiene rules around serving the big slabs of meat – and they were required to show that they had the right space, equipment and storage to prepare the food safely.

A whopping 45 per cent of the shops didn’t comply and have stopped selling shawarma – so 572 outlets were told to sort their shawarma out, and because of this 254 outlets have now stopped selling the stuff (although these shops will be able to continue operating and selling the other items they offer).

But will some outlets that aren’t hygienic slip through the cracks? No, Sultan Ali Al Taher, head of Food Inspection at the Food Safety Department, told Gulf News: “There is no grace period for them. They will have to stop the sale of shawarma’s immediately. They will be fined if they are found selling shawarmas.”

WHAT ARE THE NEW RULES?

– Well, you won’t see rotating meat sitting outside anymore, as the new rules mean it is now mandatory to move shawarma stands indoors so the skewered protein isn’t exposed to dust, dirt or any external pollutions as it just sits there.

– It is now essential for all shops to have ample refrigeration for raw materials, and separate facilities for defrosting frozen meat and preparing vegetables.

Eat & Drink
News
Restaurants
EDITOR’S PICKS
So, when is the next UAE public holiday in 2021?
READ MORE
All of the lavish new hotels set to open in Dubai in 2021
READ MORE
16 of the best pool passes in Dubai that are fully redeemable
READ MORE
All of the restaurants at West Beach, Palm Jumeirah
READ MORE
MOST POPULAR
A unique courtroom drama is being staged at The Junction this June
10 amazing new restaurants and cafes coming to Saadiyat Island
This Dubai bar is hosting the ultimate 'Friends'-themed night out
This fun Dubai staycation includes waterpark access
6 awesome things to do in Dubai this week: June 13 to 16
YOU SHOULD CHECK OUT
Our website uses cookies and other similar technologies to improve our site and your online experience. By continuing to use our website you consent to cookies being used. Read our privacy policy here.