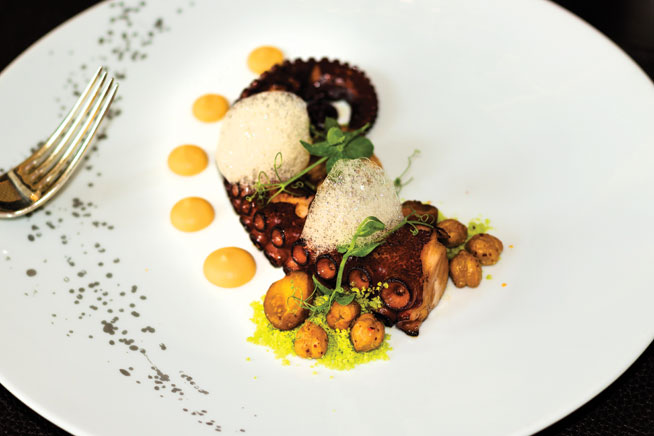 Octopus? At a steakhouse? The new menu at this Saadiyat establishment surprised us in more ways than one, but the dish that really caught our eye is this stunningly presented bit of seafood. The marinated tentacle is cooked perfectly, tender to touch, and paired with green peas, marinated cherry tomatoes and a creamy chickpea purée. 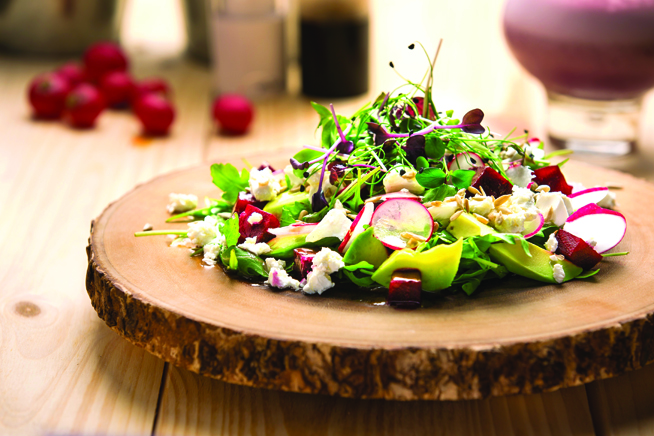 Steroid Café might be for gym bunnies, but there’s plenty of healthy dishes for everyone to sample here, and this salad is one of our favourites of the year, thanks to simple ingredients combined well. Marinated beetroot and feta are a match made in heaven along with avocado, sunflower seeds, radish, asparagus and a subtle lemon dressing. Put simply, it is well and truly delicious. 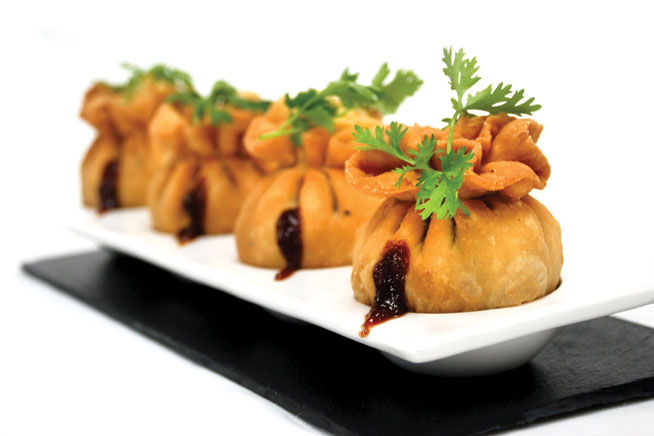 This Indian restaurant at Al Seef Village Mall only opened in the middle of 2016, and the lamb dumplings impressed on our first visit – the outlet’s interpretation on the  cuisine’s classic samosas are pretty special, and are filled with minced meat that’s spiced with dried nuts, coriander and green chilies, making for a perfect combination of textures and flavours. We’re not sure we’ll order an ordinary samosa ever again.

04. The Main Affair at Café Mandarina 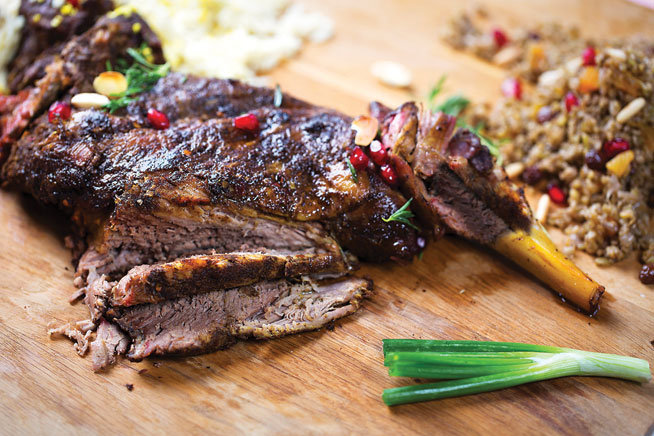 Mandarina serves a varied international and Middle Eastern menu, and the highlight is the appropriately named The Main Affair. It’s a dish you’ll have to order one day in advance but it’s worth planning ahead. Served on a massive wooden platter, a braised leg of lamb is slow-cooked till tender and generously spiced with cumin, cinnamon and ginger. It’s so big it’ll feed four people. 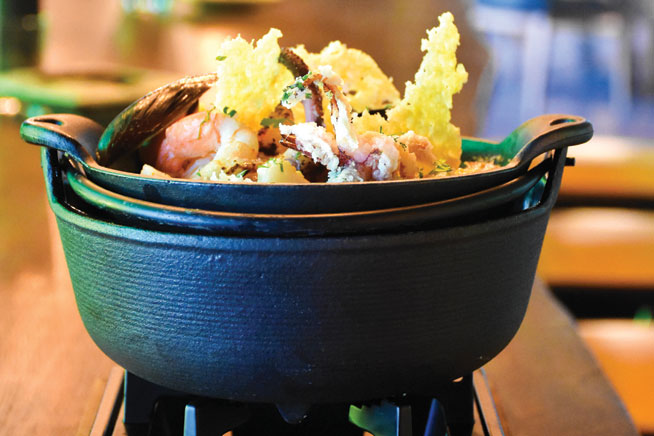 The pan-Latino outlet in WTC was crowned our Newcomer Of The Year at the What’s On Awards, and its Chupe Pot dish is almost worthy of an award of its own. It’s a delicate and creamy mixed seafood stew topped with a Parmesan crust – comfort food at its best.

06. The burger at Art House Café

The homemade patty (with beef sourced locally) at Art House is served cooked medium with Emmental cheese, coleslaw, tomatoes and onion chutney on a simple white bun – it’s one of the best we’ve had all year.

07. The hot lobster roll at The Shack 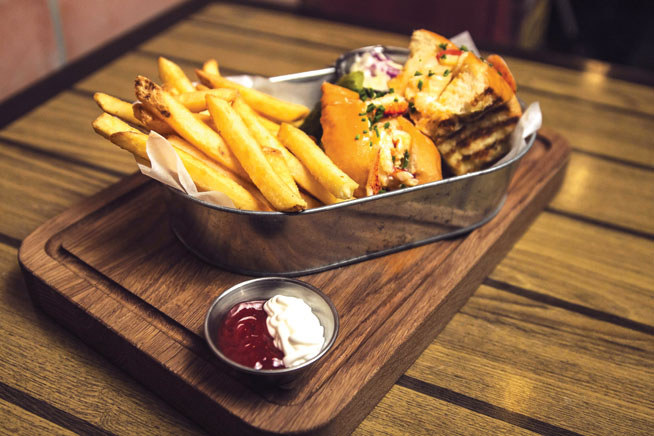 Head to the Embassies District for a simple dish that has had team What’s On going back for repeat visits. The hot lobster roll won’t win any healthy eating awards, thanks to a combo of grilled seafood in a lemon butter sauce and mayo served in a sweet bread roll, but this one is all about the rich, decadent flavours.

You’ll have to phone ahead to find out when this one is available, as it’s from the specials menu. The lamb is served on a French brioche bun with a trio of condiments including guacamole, homemade pickles and caramelised onions. Cooked overnight, the meat falls apart.

Vasco’s has a new Scottish chef, John McCallum – and he’s already had a positive effect on the dishes. His brief was to bring some sophistication to the menu and it’s apparent in the Dutch milk-fed veal medallions. They’re tender, full of flavour and served with truffle potato mousseline.

If you’re after Italian flavours, be sure to order the mushroom risotto at the Sofitel’s new Italian. Chock-full of porcini and button mushrooms, the risotto is layered with earthy flavours and is extremely indulgent.

For a change, there is no cream or cashews in this classic mix of cheese and spinach (even though the texture is still creamy) and it’s all the better for it. The flavours are rich, warm and moreish and it’s the best paneer we’ve ever tried anywhere, not just in the UAE. It’s also a great main option for vegetarians.

12. The miso black cod at Zuma 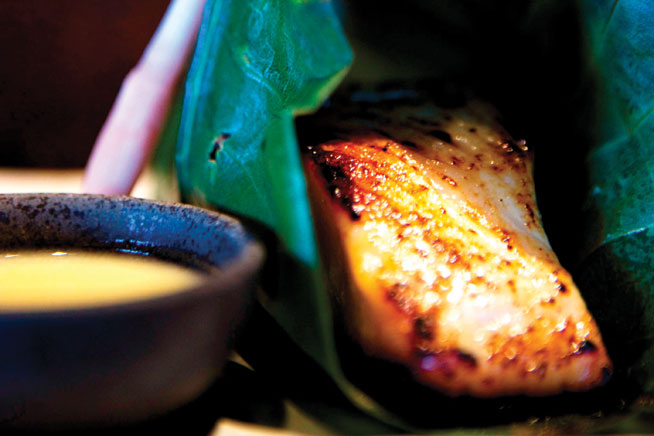 We crowned this Japanese our Restaurant Of The Year, for the second time in a row last month, and one of the reasons is its consistency – and its miso marinated black cod wrapped in a hoba leaf is a perfect example. Fluffy meat works magnificently with the slightly sticky, sweet miso marinade. 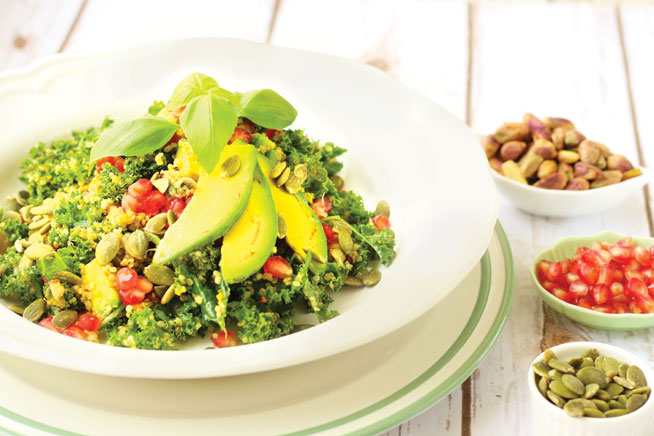 Once in a while, team What’s On likes to order a fancy lunch to be delivered to our office, but we’re also keen for it to be healthy. Step forward Basiligo, with its ever-changing menu of healthy dishes. Our favourite? The ludicrously tasty kale salad with quinoa, pistachios and pomegranate seeds. 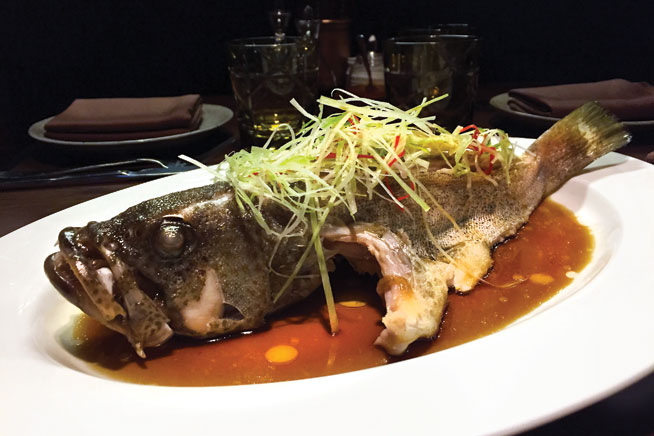 Hammour is a fish that can cause controversy on a menu – after all, it’s often overfished, meaning we at What’s On think you should only have it once or twice a year, as a treat. But make sure you have your treat at the Rosewood’s What’s On Award- winning Chinese restaurant. The whole steamed hammour in ginger, spring onion and soya sauce looks the part and tastes spectacular as well.

Our final main dish comes from this Le Royal Méridien outlet’s Thursday night brunch menu. Market Kitchen’s slow-cooked salmon with snap peas sits on a bed of creamy, rich, salty mashed spuds and truffle vinaigrette. The flavours are tasty but not overwhelming and the fish is soft and cooked
to perfection. 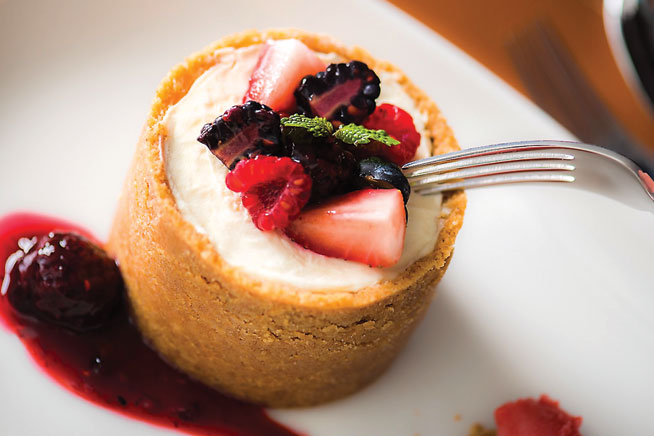 You’d be a fool not to save some space for this iconic pud served at the city’s newest meat-loving eatery. Using the same recipe from their Grosvenor House location in London, it has a perfect crust-to-cream ratio. It’s so popular that the recipe has been shared online.

17. The Ciocco Colato at Roberto’s 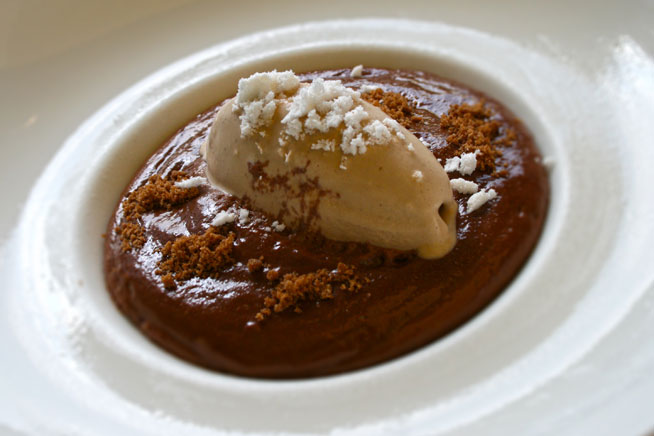 The showstopper at this recently opened Italian on Al Maryah Island consists of 72 per cent chocolate foam served with hazelnut ice cream. The foam is more akin to the sauce you find in a chocolate fondant and is sensational with the nutty ice cream. 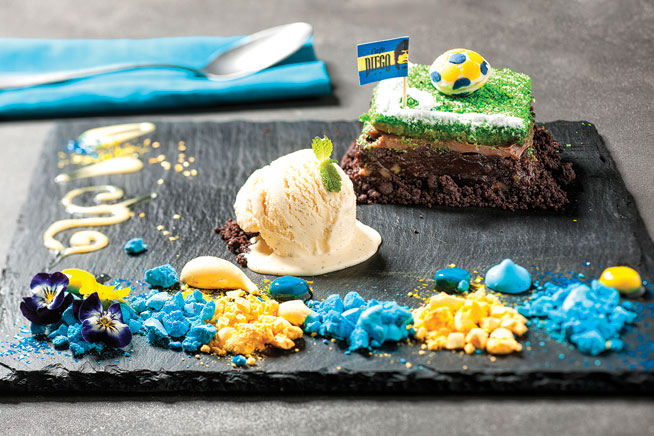 This cleverly designed chocolate brownie at Diego Maradona’s joint looks like a football pitch corner flag and is a cascade of colours and flavours, including crushed chocolate biscuits, a layer of nuts and another of ganache. On the side you’ll find yoghurt caviar, meringue in the colours of the Boca team kit (he used to play for them) and vanilla ice cream. It’s a clever dish that could feed four. 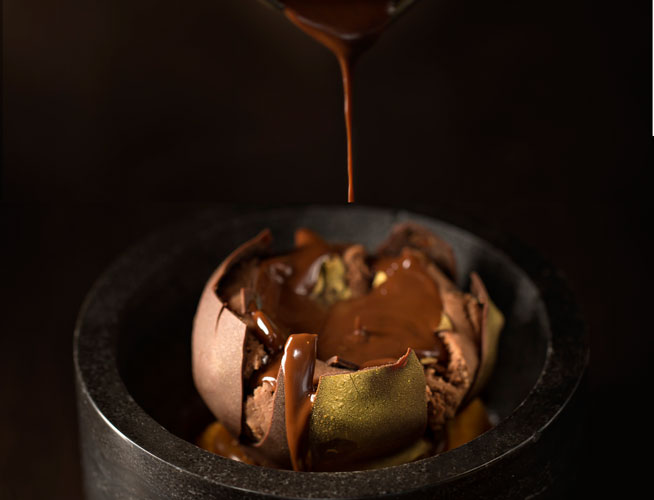 This hip, What’s On Award-winning Indian restaurant in the World Trade Center has several curiously named desserts, but the best has to be The Break-Up. It’s a decadent and rich dark chocolate mousse ball with peanut semifreddo, salted caramel and chocolate sauce, which is cracked open by the waiter when served. It’s probably our favourite pud of 2016 and the one we order every time we visit. 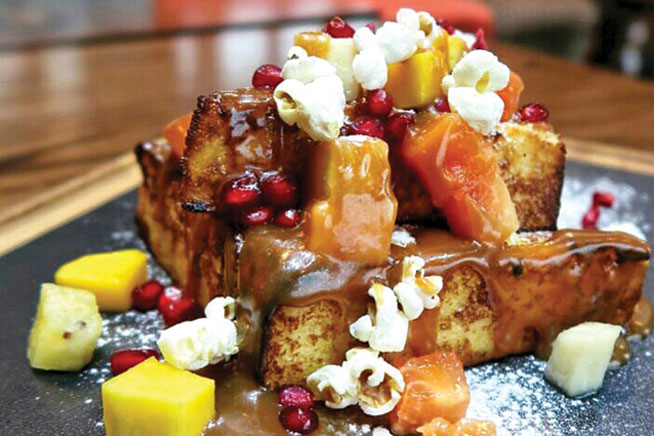 The only breakfast dish to make our list and it’s an indulgent one, to say the least. The OMG Julie is two doorstop-thick slices of French toast served with roasted papaya, pineapple and mango and caramel sauce. Great for sharing, it isn’t as overpowering as it sounds and the roasted fruit are a particular highlight.