Wondering where to party this NYE? We've got you covered...

Undecided on where to spend New Year’s? Here are some top big-night-out options…

The New Year is nigh, and if you wish to avoid any unwanted, last-minute planning, you probably want to get booking now-ish.

Luckily for you, though, there are plenty of parties to attend to ring in 2017, so we went ahead and threw together a list of some of our favourites… if it’s more of a dinner and drinks night out that you’re after, check out our guide to chilled out NYE deals here.

But for now, here are the go-big-or-go-home parties…

Formerly of the Swedish House Mafia, Axwell and Sebastian Ingrosso have since paired up to bring their unique blend of stadium-sized progressive electro to the masses. And they’ll be bringing in the New Year at Meydan Racecourse here in Dubai.

There’s a good chance that you’ll hear some fresh production work from the duo on the night too. “We actually have some music that we’ve been working on and so we’re very excited to get back into our studio,” said Axwell.

As Swedish House Mafia, with Steve Angello, the Dutch supergroup chalked up massive worldwide hits with the likes of One, Save The World, featuring John Martin, and Don’t You Worry Child, which Martin also vocalled. From their formation in 2008 until their eventual split in 2013, they played stadium gigs around the world and released two documentary movies that showed their life on the road.

If you want to stay the night and see the concert you can pay Dhs2,999 for two (which includes breakfast), pay Dhs3,999 for two and get a one-night stay in a deluxe room, deluxe concert tickets, an open bar and food during the concert and a New Year’s Day breakfast. 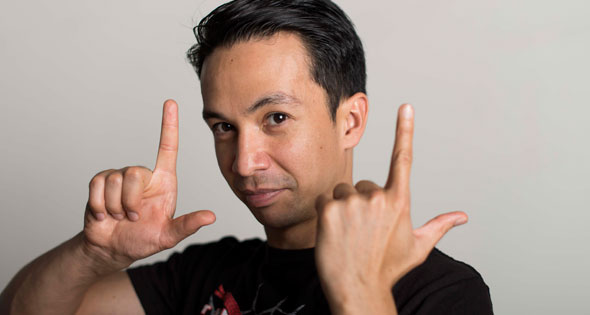 The ever-popular Dubai beach bar knows a thing or two about throwing a massive shindig, and is flying in Dutch DJ and producer Laidback Luke to headline its NYE bash. With years in the game and a back catalogue of tracks that would make most EDM ‘stars’ weep, Luke said recently that his experience sets him apart.

Pulling no punches, he told YourEDM.com recently: “I’m quite disappointed at the level of DJing nowadays. Especially if you keep in mind the amount of money we get paid as DJs. Shouldn’t you be an expert at what you do then?”

He added: “The quality of experience will get so much better than just being amazed by a guy standing on the DJ booth and yelling through the mic that you should make some noise. Obviously, I could do that too. It’s harder to do live mash-ups, for instance. Or pick the right song at the exact moment. Or work the third deck on the fly. Standing on the booth? Nah, man.”

Barasti is also one of the best places to watch the jaw-dropping fireworks along JBR and, as always, the crowds will be warmed up to boiling point by the ever-ready team of Barasti residents.

One of Pioneer’s main DJ developers, James Zabiela will be bringing his deck skills to pool-side in the Sofitel in Downtown Dubai.

As you boogie on down to Zabiela’s famed house and techno blends, you’ll be given full view of the Burj Khalifa’s big New Year’s fireworks show.

With your ticket, you’ll also be granted access to select drinks at the open bar. There’ll also be an open buffet too (woohoo!).

The event has limited tickets (there are only 500), so book fast. 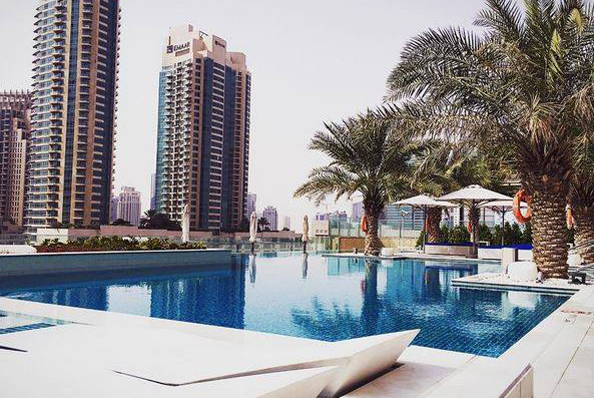 Sofitel Downtown Dubai, Sheikh Zayed Road, Dubai, 8pm to 4am, Tickets from Dhs750 for ladies and Dhs850 for men.

4. NYE with DJ Marky Mark at The Irish Village

If you’re looking for a New Year’s celebration that’s more leafy green than laser light show, then the Dhs200 party at Irish Village should have you covered.

Irish Village’s New Year’s celebrations will consist of live music from venue favourites The Maple Jacks, with DJ Marky Mark on hand to plug the gaps with an array of dance floor fillers.

Unfortunately the ticket won’t bag you any free bevvies, but it does include a slap up buffet. 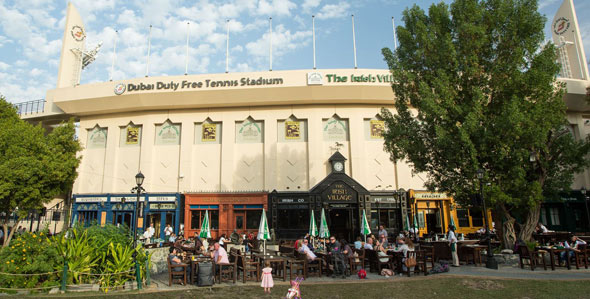 5. A cheaper night at Stereo Arcade

Dubai’s much-loved retro-themed bar will be welcoming the New Year with an open bar (and it’s marvelously easy on the wallet, too, starting from Dhs250).

DJ Dean Curtis will be on hand to play hits throughout the ages, and there’ll even be a rock DJ in the adjoining pub.

Just make sure you don’t get caught up on the arcade machines and miss the New Year’s countdown.

After selling out gigs in the UK at Birmingham’s 02 Academy and London’s famous Alexandra Palace last month, drum ‘n’ bass kings Chase & Status say hello to 2017 here in Dubai. Having chalked up a clutch of UK No.1s, they’ve also collaborated with the likes of Plan B, Cee Lo Green, Rihanna and Example in the past.

Expect more bounce to the ounce when the lads hit Zero Gravity’s NYE party. Not to be outdone, 2manyDJs – masters at party destroying dancefloor mash-ups – will be no slouches when it comes to rocking the crowd. 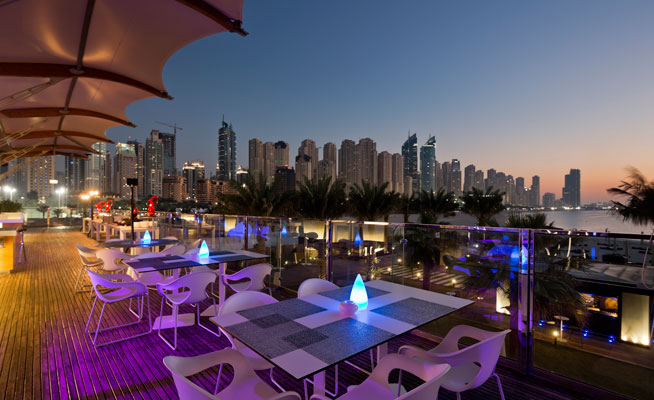 Looking for the least pretentious NYE party in town? Bad House Party has you covered. What this indie-punk night lacks in glitz it makes up for in raucous fun. With a ‘Prom Gone Wrong’ theme you can wear your most gaudy outfit with pride, while resident DJs Anchorlady, Estee Slaughter, Madbutcher and DJ 0 provide the tunes. Free entry makes it easy on the pocket too. 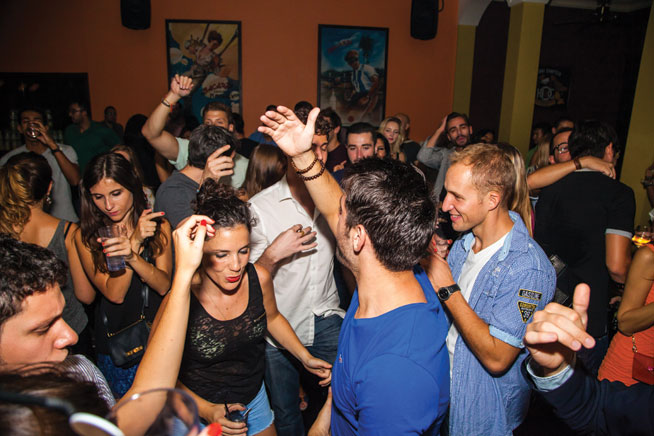 If you love house music, it goes without saying you’ll love Roger Sanchez. The New York DJ and Stealth Records boss is back in Dubai and back at one of his favourite local hangouts, Q43, to welcome in 2017 with a dancefloor carving barrage of tribal house sounds that’s he’s most famous for. 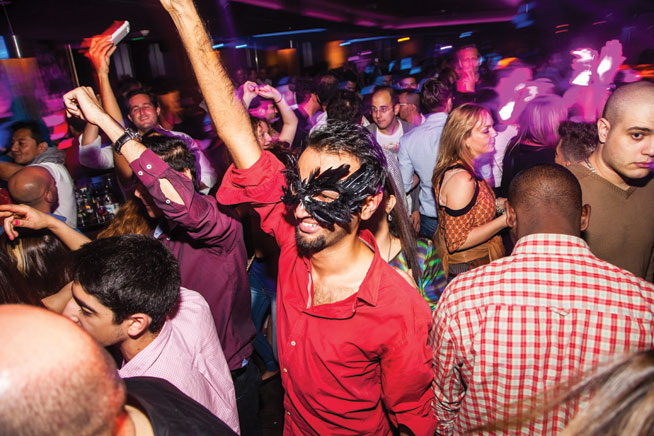 If you’re looking for a full-blown beach party, Blue Marlin have flown in some of the DJ world’s big dogs. The large, beachside venue is no stranger to big throwdowns – and their New Year’s event shouldn’t disappoint. They’ll welcome the Elrow family, starring Dennis Ferrer, Stacey Pullen and De La Swing.

An NYE party with their unique brand of crazy production and equally matched top-drawer line-ups is a great choice to see in 2017. Resident De La Swing is hot property and his tracks have been popping up on labels like Deeperfect. The Spanish selector is joined by Dennis Ferrer, who delivers the goods whether behind the decks or in the studio, his production chops especially evident on his recent distorted funk re-rub of Books Shade’s Lost High. Second wave Detroit instigator Stacey Pullen, known for his jazzy take on house and techno, adds extra weight to the meaty line-up. 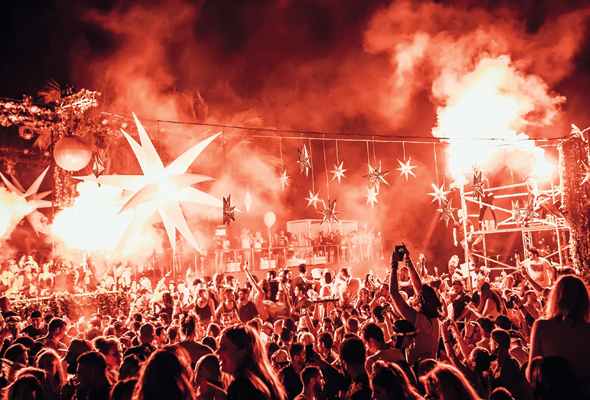