Jackie Chan in a khandoura, camels, a Lion in the back of a white Infiniti 4×4 – this trailer is full of ‘Dubai-isms’…

Remember how Jackie Chan was in Dubai last October filming a movie (and hanging out with orangutans)? Well, the first full trailer for the film is now out, and there’s plenty of Dubai in it. All of the Dubai action is in the second half of the trailer (and kicks off at about 48 seconds).

Locations in the trailer include The Palm Jumeirah, Dubai Marina, the desert, the roads of Old Town in Downtown, the camel race track – and there’s even a lion in the back of an Infiniti (although we imagine that’s the work of CGI).

And yes, that is Bollywood and City of Life star Sonu Sood in the Atlantis: 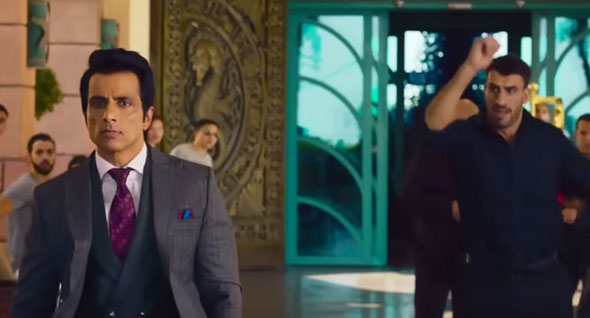 Kung Fu Yoga is actually multi-lingual and is a co-production between China and India, making it the second major Chinese-Indian film after Xuanzang.

It filmed in Dubai for a whole month and is about a renowned professor of archaeology from China (Jackie Chan) who teams up with a young Indian professor to locate a lost Indian treasure in Tibet.

Here’s a trailer for the film with English subtitles – although this one doesn’t feature the Dubai scenes (but at least gives some more context of the plot):