Road trips from Dubai to Oman will be easier in a few years...

The government has just announced that they will build a 15 kilometre extension of the new Fujairah Expressway to improve connectivity between Oman and the UAE, and that it will be ready to drive on in 2018.

The Fujairah Expressway is currently a 45-km-long six-lane road that connects Maleiha Road with Fujairah that, when opened in 2011, cut driving time from Dubai to Fujairah by about 30 minutes, making the trip just over an hour without traffic. Here’s the route…

And here’s a video of the route:

This is now a far-easier-driving option to get to Fujairah than the winding ‘Truck Road’ that runs through Ras Al Khaimah:

So what’s that about Oman?

Well, the above route on the Google Maps image above will be extended by 15 kilometres, meaning drivers to Oman can bypass the city of Fujairah and then choose one of two inter-connected highways: either the E99 (or East Coast Road) or the Sharjah-Kalba Road (the E102).

The road will become the main link between the UAE and Oman (currently those driving from the main part of Oman to Dubai generally drive through Al Ain and use the Hatta border).

It hasn’t been announced how much it will shorten the drive by (it currently takes about four and a half hours to drive from Dubai to Muscat along the coast) but we’ll keep you updated.

In the below maps image you can see the current Fujairah Expressway (blue line) and the Oman border (jagged black line at the bottom of the image). The yellow line that runs below the blue line is the Sharjah-Kalba Road that the new extension will link up with: 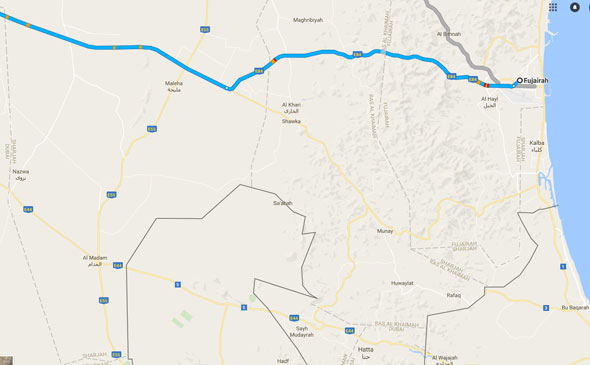 They expect the new road will service 2,400 vehicles per direction per hour – and the four-lane highway will help drivers, both commercial and recreational, to bypass the traffic in Fujariah and Kalba.

Around 30 per cent of the work on the road has been completed, and it will cost Dhs120 million overall.

Also, Sheikh Hamdan Bin Abdullah Road, which is the main artery through the city of Fujariah (kind of like its Sheikh Zayed Road) is getting a revamp. The four lane road will see a new lane added to each side, and there will be two underpasses built too. The team in charge of this revamp are currently working on the bypasses and detours to ensure traffic flow during the construction.

Transport
Travel
EDITOR’S PICKS
UAE holiday dates announced for National Day
READ MORE
Emirates Dubai 7s is back: Here's why we're excited...
READ MORE
Tennis ace Andy Murray to play at Mubadala World Tennis Championship
READ MORE
UAE 50: Where to watch National Day fireworks in Dubai
READ MORE
MOST POPULAR
UAE confirms its first case of the Omicron variant
Alhosn Green Pass to only be valid for 14 days after negative PCR
20 of the best things to do in Abu Dhabi this long weekend: Part 2
First look: London-loved restaurant The Cinnamon Club opens in Dubai
Check out this amazing display at the world's highest outdoor infinity pool
YOU SHOULD CHECK OUT
Our website uses cookies and other similar technologies to improve our site and your online experience. By continuing to use our website you consent to cookies being used. Read our privacy policy here.