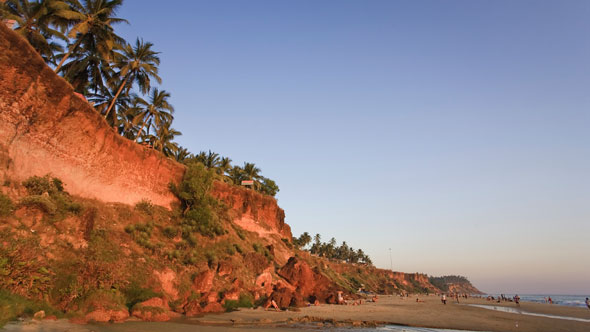 Spend a morning out on the breakwaters and an evening on the mat with Soul & Surf, a cliff-top retreat in the quiet town of Varkala, southern Kerala. Between October and May, Varkala is a surfer’s paradise with high waves and tearing winds. Lessons for beginners are available, as are yoga classes on the hotel’s sea-breezed rooftop, which take place in the evenings for guests and non-guests alike. The hotel also offers early-riser yoga classes three times a week.

Throughout Kerala there are numerous yoga shalas offering everything from a gentle morning Hatha class to more vigorous Vinyasa-style classes. On Varkala Cliff alone we counted more than a dozen yoga houses, which all come with a lovely beachside view. There are also numerous centres for budding yoga teachers to obtain their 200 hours of training. Our top pick would be the quiet, off-the-beaten-track Aarsha Yoga Vidya Peetham near the backwater hotspot Kollam, which has been training yogis since 2008.

Kerala is famous for its unique 1,500-km-long backwaters, a series of snaking tributaries crisscrossing the landscape from one of the state’s 38 rivers and canals, plus five huge lakes.

The most picturesque of these is Kerala’s second largest, the Ashtamudi Lake, near the town of Kollam. Filled with a rich biodiversity and a several endangered marine species, the Ashtamudi Lake is also home to the pretty island of Munroe, where you can stop off and visit one of Kerala’s oldest churches from 1878.

Most popular on the backwater map is the area of Alappuzha (Alleppey), known worldwide as the Venice of the East. One of the most popular ways to explore these breathtakingly beautiful waters is by houseboat, which can take anything from 12 hours to several days and gives a tranquil glimpse into rural village life. The boats are usually kettu-vallams, former traditional rice boats that have been converted into mini-hotels with an on-board cook. One high – or low – point of the backwaters is Kuttanad, one of the few places where rice is farmed below sea level. If you’re short on time, many boats offer shorter tours of up to around eight hours.

Get out your walking boots 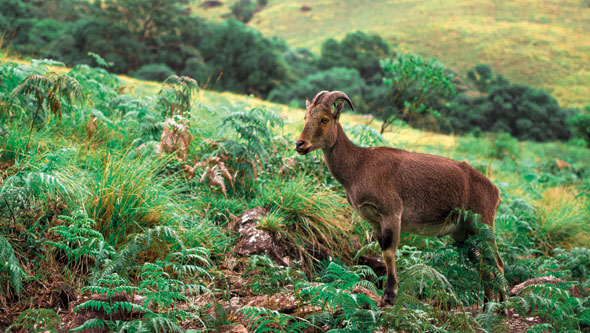 Though most of Kerala’s action can be found on its 550-km coastline, this does not mean you should leave the interiors off your itinerary. Venture inland and you will be greeted by spectacular trekking scenery comprising mountain ranges and tropical forests. The districts of Palakkad and Kottayam are among the most popular and accessible trekking options for novice hikers. Those more adventurous should venture to the Idukki District, an area of lush hills, tea plantations and wandering elephant herds.

A good place to pass through in Idukki is the hilltop town of Munnar. Situated 1,600 metres above sea level, the town is an ideal gateway to the Western Ghats mountain range within the Eravikulam National Park. Experienced trekkers may want to ascend the range’s highest peak of Anamudi Mountain, which stands at 2,695 metres, but for those less inclined towards steep climbs there are plenty of other trails around the park. Nature lovers may want to keep an eye out for the rare nilgiri tahr, a type of mountain goat found only in the Western Ghats.

Savour the taste of the sea with this traditional south Indian delicacy. Freshly caught fillet fish is marinated in spices, coconut oil and lemon juice and slowly cooked inside a banana leaf, before being served ready to unwrap and devour. 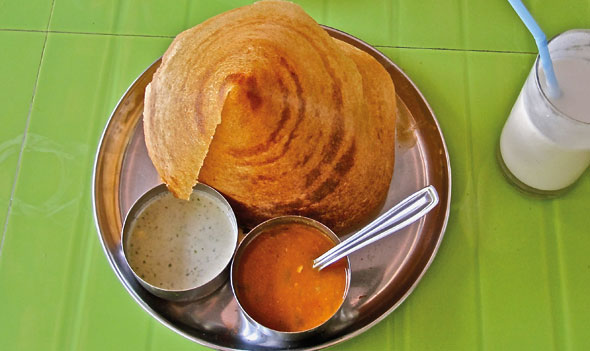 These rich, crispy pancakes can be munched for breakfast, lunch, dinner – or all three if you wish. Made of rice and black gram, these south Indian specialities are delicious when served with chutney and sambar, and make for an excellent protein-filled vegetarian dish. 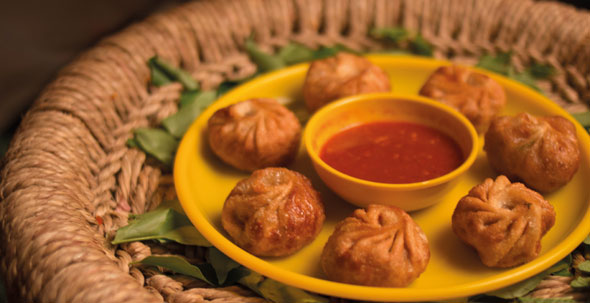 Try these succulent Nepalese dumplings at the picturesque Tibetan Kitchen on Varkala Cliff. You can choose from an array of vegetarian momos either steamed or fried with some chilli sauce on side for that extra spice kick.

Chai and coffee on a heavenly scale

If there is one place you may find yourself frequenting on many occasions, it’s the Coffee Temple by Varkala Helipad. Quench your thirst on either rich coffee or fragrant chai enjoying the company of some of the town’s four-legged friends.

There is nothing quite as synonymous with Kerala as the 5,000-year old healing system of Ayurveda. So revered is it in south India that the government runs several Ayurvedic hospitals and treatment centres across the state, which offer cures for any given health conditions.

A typical treatment usually involves a warm oil massage designed to alleviate the body and mind of stress and physical ailments. Those feeling braver can try having a small amount of medicated oil poured down your nasal passages, so that it drips into your throat, as a way of clearing out your Dubai-clogged passageways.

As there are thousands of medical centres and spas claiming to practice Ayurveda with varying credentials, this is an area well-worth researching. Many such as Somatheeram Ayurvedic Health Resort, in Kovlam, offer yoga classes alongside Ayurveda treatment, giving you the whole detoxification package. 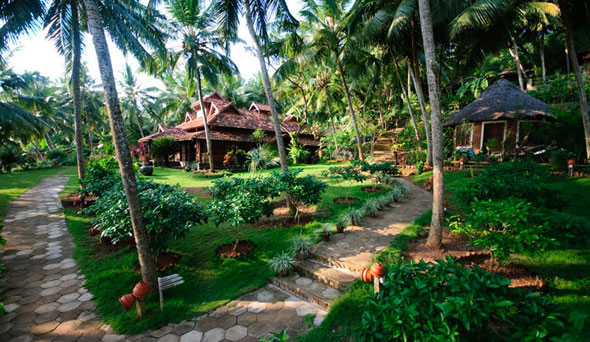 The grounds of the Somatheeram Ayurvedic Health Resort.

September until March is an excellent time to visit. Temperatures and humidity soar in April and May, and from then monsoon season arrives (which has its own charms). 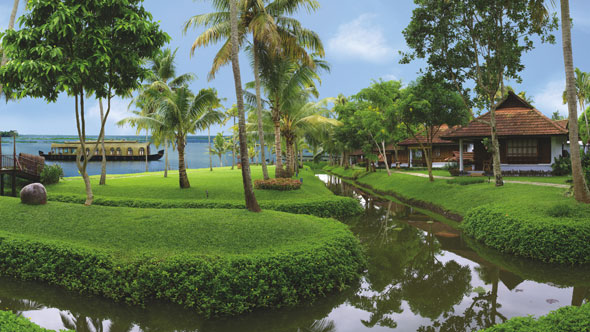 Choose between a luxurious houseboat or a traditional villa at this 25-acre lakefront resort in Kottayam. Prices start at Dhs950 per night. 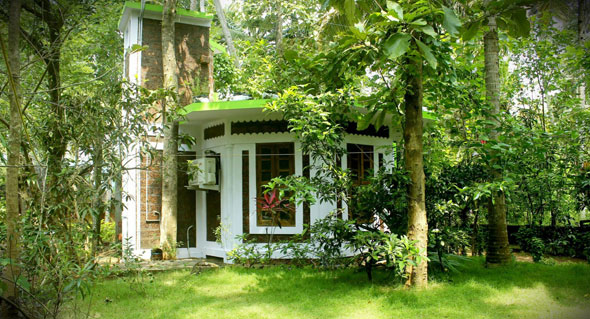 Nestled away atop Varkala Cliff, this budget-friendly guesthouse has a lovely welcoming feel to it. The manager Nijad is often on hand and more than happy to help with anything from arranging transport to restaurant recommendations. Prices start at Dhs565 per night inclusive of breakfast. 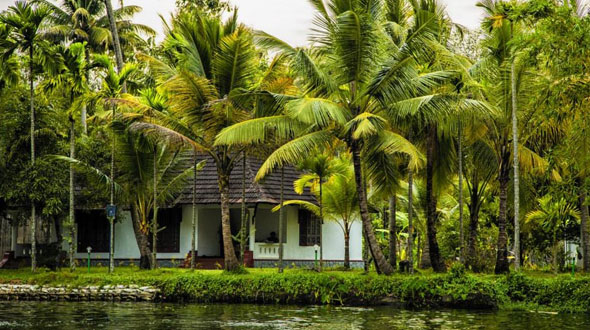 Relax in an old, but scenic double cottage in the backwater heartland of Alappuzha. Cottages all come with air-conditioning and are set in a palm-filled garden with lake views. Prices for a Garden View cottage start at Dhs172 per night.

Day-to-day travel is easily carried out with local taxis and tuk-tuks, though come armed with your best negotiation skills possible. Trains run regularly from Kochi and Thiruvananthapuram and are a relatively cheap option for long-distance travel. Most hotels offer pick-up, while those venturing off the beaten track for longer periods may find it worth investing in a chauffeured car.

News
Travel
Travel Guides
EDITOR’S PICKS
Ain Dubai will open with fireworks, live music and a drone show
READ MORE
Incredible Aura SkyPool to open in Palm Tower this November
READ MORE
Brit Grand Slam hero Emma Raducanu confirmed for Mubadala Tennis
READ MORE
What’s On Nightlife Awards 2021: Here are the nominees...
READ MORE
MOST POPULAR
Review: Niri Restaurant and Bar, Mamsha Al Saadiyat
Harlem Globetrotters are coming to Expo 2020 Dubai this October
New venue Urla brings coastal dining to the heart of Downtown Dubai
The Dubai Moonlight Classic is bringing carnival vibes to the city
6 cool things to do in Abu Dhabi this week: October 24 to 27
YOU SHOULD CHECK OUT
Our website uses cookies and other similar technologies to improve our site and your online experience. By continuing to use our website you consent to cookies being used. Read our privacy policy here.