PSA: The Burj Khalifa is going to look spectacular tonight...

This patriotic light show will mean something to 1.2 million people in the UAE…

Thinking of popping down to Downtown tonight? Well, do, because the Burj Khalifa is going to be lit up in honour of 77th Pakistan Day – which is today.

The Dubai icon will light up in solidarity for the nation that is home to so many of Dubai’s residents.

*ALSO READ: 15 things to do in Dubai this weekend*


The world’s tallest building will light up with the colours of the Pakistani flag, and feature a five-rayed star in its centre with a white stripe.

The illuminated displays will take place at 7.15pm and 9.15pm on Thursday March 23. So yes, tonight only.

Here’s what the whole thing will look like. See how Dubai Mall’s getting involved too? Magical… 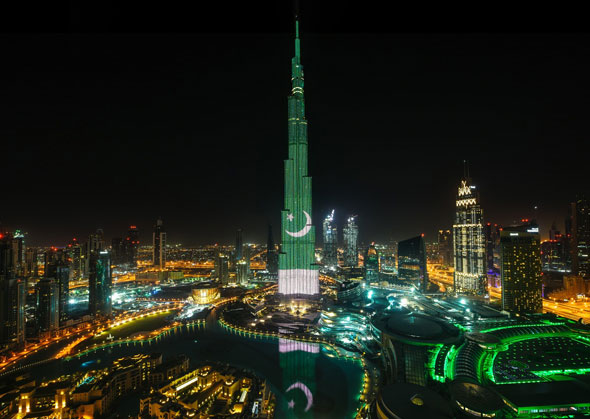 It is estimated that 1.2 million Pakistanis live in the UAE, with around 400,000 in Dubai alone.

This makes them the second largest national group in the UAE after Indians.

Side note: Pakistan National Day marks the first constitution of Pakistan. It remembers the moment on 23 March 1956 when Pakistan became the world’s first Islamic Republic.

NOW READ: This picture sums up one of the reasons that Dubai is great…