Watch: We test out the brand new Turbo Track ride at Ferrari World

I don’t drive, and I don’t like heights. How on earth have I gotten myself into this?

That’s what I’m thinking as I’m buckled into the new Turbo Track ride at Ferrari World Abu Dhabi. On the way there, I could see the bright red steel track protruding from the theme park’s roof. At 64 metres above ground, it’s the highest point of Yas Island. Gulp.

Turbo Track is meant to give you an idea of what it’s like to be a Ferrari test driver, and the ride is broken up into three parts.

Here’s what happened when we tried it out:

First, we undergo a performance analysis in a briefing room, where we’re greeted by an enthusiastic technical director in a lab coat. She selects volunteers to take part in reflex and precision tests, before wishing us luck… and checking we’d signed our liability waivers (I think she was joking).

We then make our way up to the megacoaster, which appears fairly tame at first sight – all you can see is the cart, and the start of the 180-metre track.

Look a bit further down the line, however, and you’ll see a giant glass funnel, which allows you to burst through the roof at 102 kilometres per hour. Gulp. 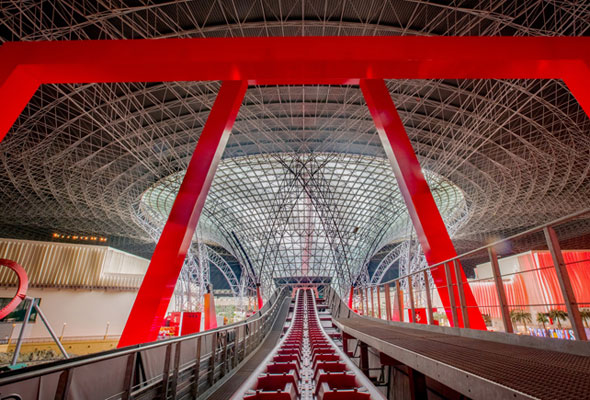 Once you’ve reached the spike at the very top, you plummet back down again, experiencing zero gravity during the vertical plunge.

It’s all over in about 30 seconds.

Before I can even begin to prepare myself for what’s about to happen, we’re shooting along the track at a speed that has me screaming like a cat with its tail stuck in the door.

I feel the hot blast of the sun hit my face as we blast out of the theme park… but my eyes are screwed so tightly shut, I can’t tell you what the view is like. Sorry.

My stomach is left at the top of Yas Island as we hurtle vertically back down to earth, and the ride is over almost as soon as it began. Short and sweet.

It’s definitely worth lining up for another turn – the ride has both front-facing and back-facing seats, so you can try it both ways.

I prefer facing backwards, which gives the sensation of being dragged up to the top. This time, I dare to take a peek below… and it literally takes my breath away.

Turbo Track may not be the fastest ride (that claim to fame belongs to the 239 kmh Formula Rossa) or the steepest (that would be the Flying Aces, with its 51-degree cable lift) – but it has been dubbed the “most heart-pounding rollercoaster in the world”.

The new ride opens to the public on Wednesday, March 29. For more information visit ferrariworldabudhabi.com.