A weekend in Cebu, the Philippines' hidden paradise

Keen to plan a long weekend away soon? Well, spend two days swimming with sharks (friendly ones), chilling on the beach and exploring the local cuisine at Cebu – a very magical island…

When you have 7,106 other islands to compete with, you really have to stand out from the tropical island crowd. This is where Cebu, the most prominent of the Philippines’ Visayas region, shines. The lush green island with the mountainous central spine offers some of the most exciting tourist attractions in the country, yet the hordes of overseas travellers seem not to have caught on yet. Swim with whale sharks, throw yourself (safely, obviously) from 50-foot cliffs, or simply relax on a beach alongside the locals, as you eat coconut pies and gorge on the world’s best mangoes. And, get there before the masses do. 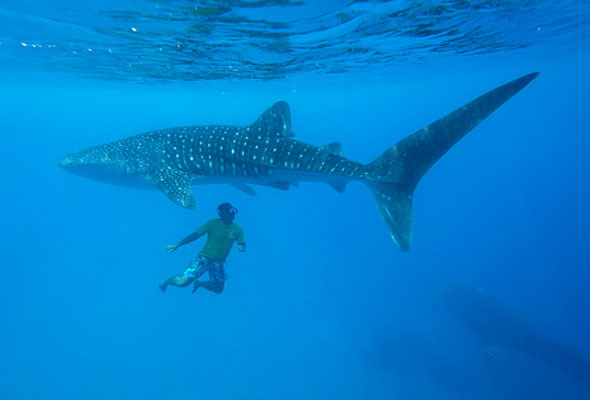 They’re not the razor-teethed, carnivorous kind, but getting up close and personal with these whale sharks, the biggest fish species in the world, is so inspiring you’ll need to remember to actually breathe through your snorkel. Oslob, in south Cebu, is the place to see these extraordinary, spotted carpet sharks, as they swarm to a spot not far off the beach each morning to be fed by local fisherman. Tourists can pay just PHP1,000 (Dhs73) to jump in with them, and watch their huge spotted bodies glide through the water. Cebu Trip Tours offers an awesome day tour to swim with the ocean’s giants, including a side trip to the spectacular Sumilon Sandbar, for Dhs482, including breakfast and lunch. 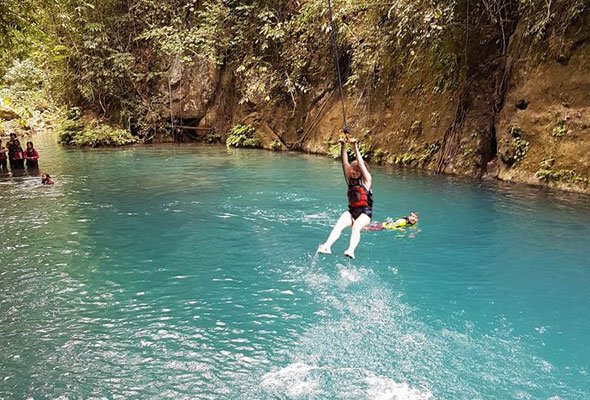 Philippines is one of the best places to give canyoning a go, more specifically Badian Canyoning in South Cebu. Book a tour and an expert guide will have you scrambling over rocks, jumping into turquoise-green water, and being shot over the side of a makeshift rock-slide, before you end up at the pristine Kawasan Falls. The jumps will get gradually higher though, and before you know it you’re screaming “Geronimo” over a 50-foot fall, trying to prove to the back-flipping locals that you can do it as good as they can. Cebu Tours offers an excellent canyoning day tour, including a trip to Pescador Island for some snorkelling, sea turtle and dolphin sightings, a dip amongst the sardine run and lunch for about Dhs635. 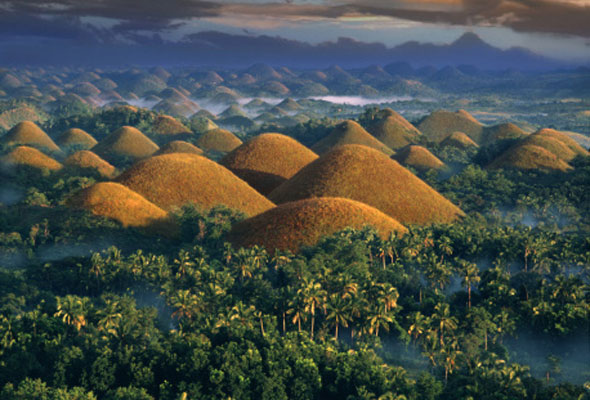 The “chocolate hills” might sound like a delicious attraction Willy Wonka might have dreamt up, but they’re actually 1,200 or so symmetrical mounds on Bohol, an island just off the coast of Cebu. The mounds are for the most part green, but turn a cocoa-brown in the dry season and contrast with the jungle below; thus the name. The island is also famous for the saucer-eyed tarsier, a peculiar-looking animal that stakes its claim as one of the world’s smallest primates. For that reason, Bohol is home to the Philippine Tarsier Sanctuary, a way for travellers to visit the bug-eyed nocturnal tarsiers in a humane and ecofriendly environment.

4. Get some beach time 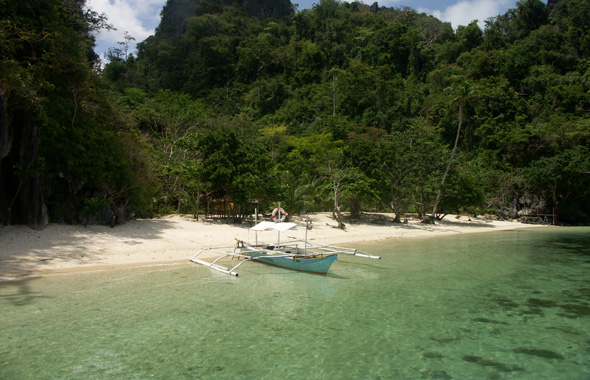 There’s a reason why some of the beaches here are considered the best in the world, and it doesn’t all end in Palawan. The sand is white and the sea crystal-clear and a beautiful turquoise green in Cebu too, making it the perfect spot for a day under a palm tree with a good book, or a paddle in and around the pristine coral reefs. South Cebu’s Lambug Public Beach, and the aptly named Paradise Beach on Bantayan Island to Cebu’s north-west, are some of the best. 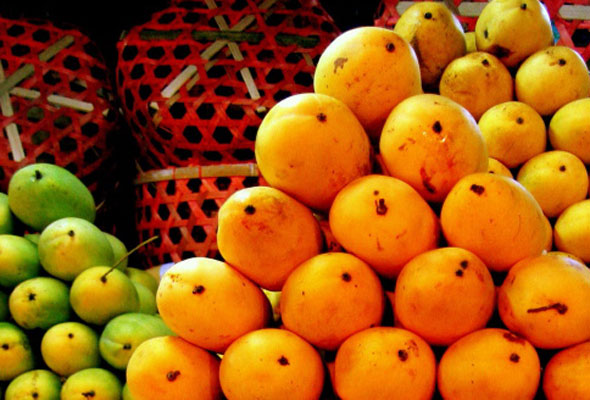 We know mangoes are available worldwide, but when the White House and Buckingham Palace are sourcing Filipino-grown mangoes to serve the dignitaries, you know they’ve got to be good. The gorgeously sweet and juicy Filipino variety are sold ripe to be devoured on the spot, unripe to be dipped in shrimp paste, or dried – a local delicacy exported around the world.

Eat it at: Any street stall. 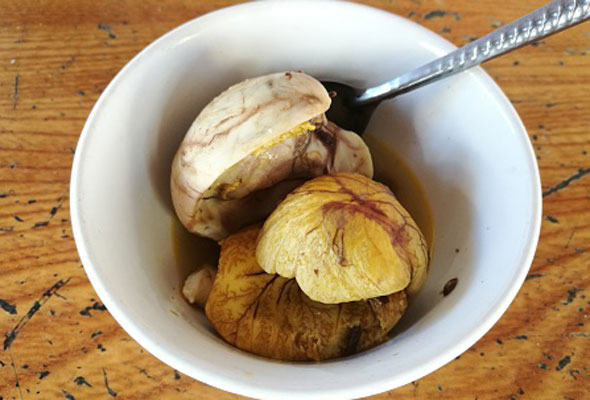 A developing duck embryo. We wish we could tell you it doesn’t look as bad as it sounds, but when you open the shell and see the features of a half-formed chick, it’s hard to argue this as anything other than an acquired taste. Try it if you dare.

Eat it at: Balut vendors can be found on the streets of most Filipino cities at night. 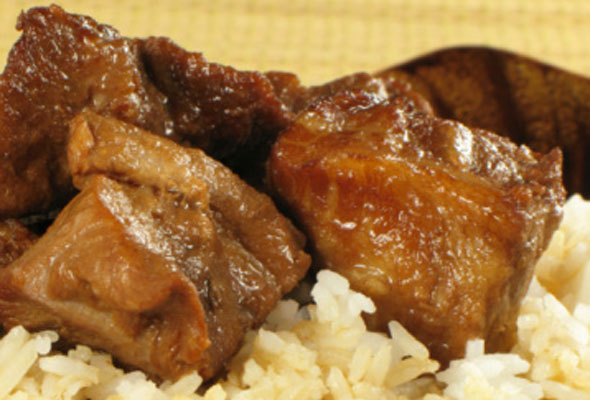 The most recognisable Filipino dish, you simply cannot come to the Philippines and not try adobo, in all its meaty forms. The national meal is slowly cooked meat in soy sauce, vinegar, garlic, black peppercorns and bay leaves and is served over a hot cup of steaming rice. 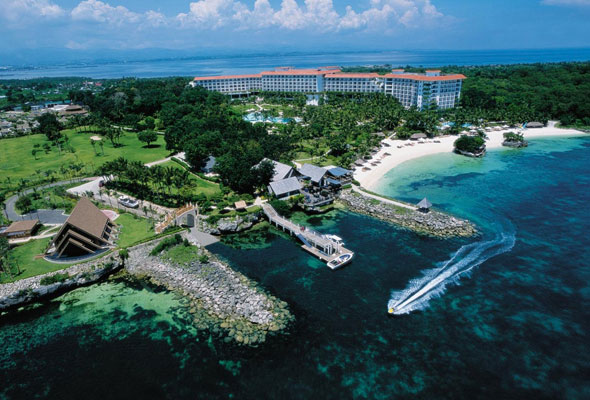 A lush getaway nestled away in a quiet corner of Mactan Island, the small droplet of land a few kilometres to the southeast of Cebu, connected with bridges. It hosts a private white sandy beach alongside the Shangri-La Marine Sanctuary, with plenty of dining options, including a fantastic outdoor buffet featuring a live Filipino dance performance. 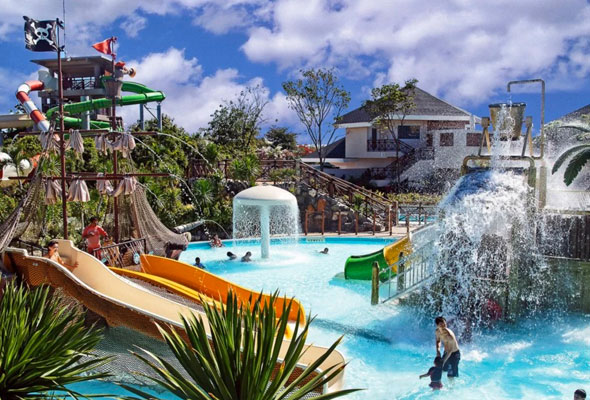 Spend your day checking out the park’s five swimming pools, three water slides and private beach, and meander a few steps to retire to your plush lodgings as the sun goes down.

Rooms start from around Dhs900. 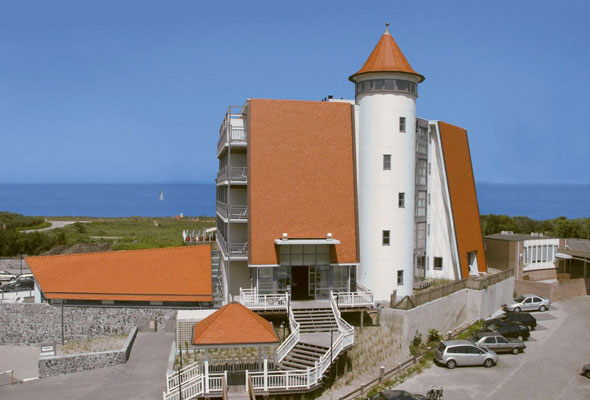 With a prime spot on the shores of southern Cebu, Noordzee is a top choice for the budget traveler. There’s a private beach, tourist attractions nearby, and a local town within walking distance. Not bad for Dhs50 a dorm bed. 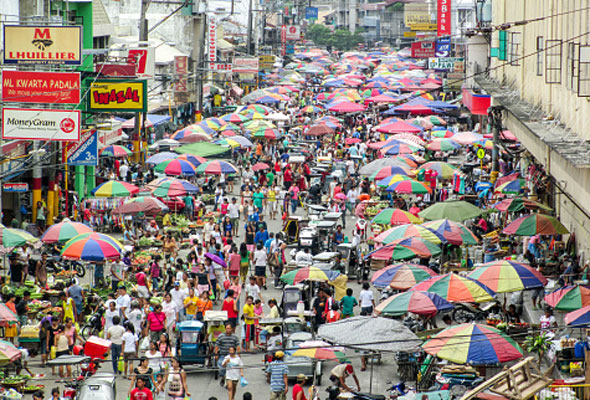 It might be bit less beachy, and a bit more busy, but you should also check out the country’s capital, Manila.

Get past the congestion, jump into the heaving masses and discover a beautiful chaos with some of the friendliest faces in Southeast Asia.

Do: A city tour 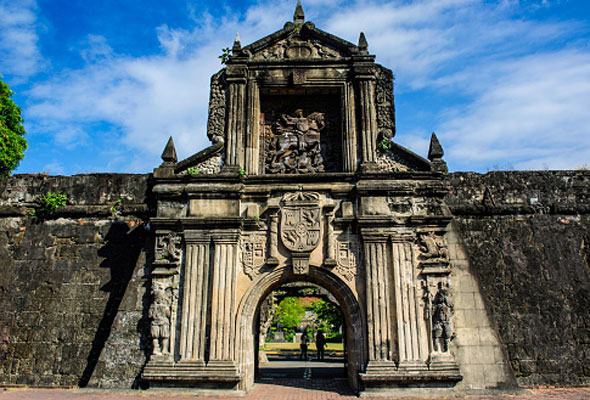 Did you know Manila has been under Spanish, Japanese and American rule? Neither did we, but the reminders are everywhere. Take a tour with a knowledgeable guide to the old Spanish quarter, Intramuros, for a good introduction into Manila’s colourful early years. Book one in for about Dhs142. 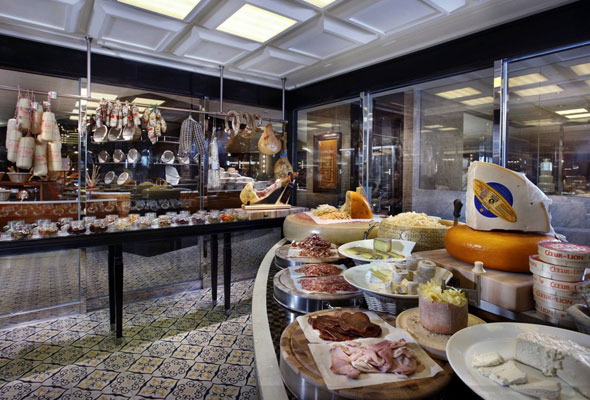 With 21 different cooking stations featuring cuisines from French to Japanese to Italian to Filipino, and a huge team of world-class chefs manning the decks, there’s a reason why this is one of the best dining destinations in the whole of Asia. Brunch costs PHP2,523.90 (Dhs184) 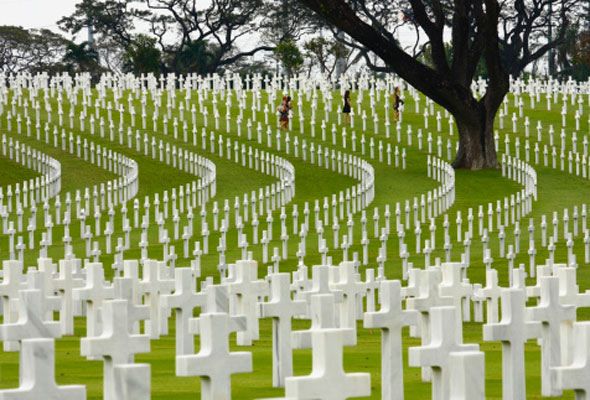 A beautiful green oasis in the middle of the tangled, throbbing streets of Fort Bonifacio, this sprawling 152-acre memorial holds 17, 191 graves of Filipinos who lost their lives in the Second World War. The emerald green parkland, and central chapel and hemicycles are a stunning testament to the soldiers, who were then fighting as an American territory. The cemetery is free to enter.

– The population of the Philippines is 103 million, spread over 7,107 islands.

– Three of the world’s biggest malls are found in the Philippines.

– The country was named after King Philip II of Spain, after it was colonised and controlled by the Spanish for 327 years.

News
Travel
Travel Guides
EDITOR’S PICKS
What’s On Nightlife Awards 2021: Here are the winners...
READ MORE
Where to see fireworks in Dubai
READ MORE
This new ladies' night offers a free open bar every Tuesday
READ MORE
Coming soon: The hottest new bars, restaurants and beach clubs
READ MORE
MOST POPULAR
Bob Marley’s The Wailers to perform at The Irish Village next month
A gorgeous rooftop bar has opened at Expo 2020 Dubai
Culture guide: A classical music night, performances and more to check out from Oct 28 to 30
Exploring Abu Dhabi’s hidden worlds of Culture and Cuisine
Myrra's last Saturday Summer Brunch is a special Halloween edition
YOU SHOULD CHECK OUT
Our website uses cookies and other similar technologies to improve our site and your online experience. By continuing to use our website you consent to cookies being used. Read our privacy policy here.