Need a cab? The cost of a taxi ride in Abu Dhabi is about to go up

New starting fares announced, along with new rates for every kilometre you travel
The price of a cab journey in Abu Dhabi is about to cost you a little bit more.
The capital’s taxi company TransAd has announced that the initial meter charge in one of its standard, silver Toyota Camry cabs will rise from Dhs3.50 to Dhs5 between 6am and 10pm, and from Dhs4 to Dhs5.50 from 10pm to 6am. That’s a 30 per cent increase for daytime rides and a 28 per cent rise at night.
The fee for every kilometre travelled is also going up. Between 6am and 10am, it rises from Dhs1.60 to Dhs1.82 for the first 50km of your journey (if the car is moving) and from 10pm to 6am it rises from Dhs1.69 to Dhs1.82. That’s a 13 per cent increase for every kilometre travelled during the day and an eight per cent increase at night. 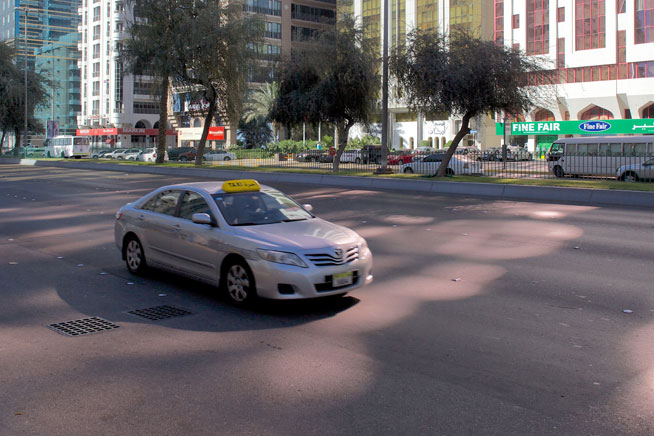 If your cab is stationary in traffic, or you need the cabbie to wait while you hop out to a shop or to pick someone up, you’ll be charged Dhs0.50 for every minute, the same as before. The minimum fee for a taxi is now Dhs12.
It’s the first time that prices for a cab journey in the capital have gone up in five years – and the new tariffs may even be implemented from as soon as tomorrow, May 1, according to reports.
So what kind of impact will it have on your journeys? If you took a taxi from Abu Dhabi Mall to Yas Mall during the day (a 30km journey via the Yas Highway), it’d cost you around Dhs51.50 today. From tomorrow, if the changes happen that quickly, it’ll cost you in the region of Dhs59.60. Overall those journeys will cost you about 14 per cent more with the new fees.
A daytime journey from Manarat Al Saadiyat on Saadiyat Island to the InterContinental hotel in Al Bateen (a 14km journey) will cost you around Dhs26 today, but could set you back Dhs30.50 from tomorrow.
But the starting meter price of the black Mercedes-Benz Vito taxi vans at Abu Dhabi International Airport remains at Dhs25, although the minimum ‘flag fall’ cost of getting a silver taxi from the city to the airport rises from Dhs20 to Dhs25.
We’ll have more details on this story as soon as they’re released.

News
Transport
Travel
EDITOR’S PICKS
UAE holiday dates announced for Eid Al Adha
READ MORE
Another update: Emirates extends suspension of flights from India to UAE
READ MORE
Coming soon: Everything we know about Ain Dubai so far
READ MORE
Khorfakkan set to open new tourist attraction 580 metres above sea level
READ MORE
MOST POPULAR
It's Dhs350 to brunch, stay and play at the What's On Lock In this weekend
After party: 8 of Dubai's best after-brunch deals on a Friday
Jones The Grocer is bringing its cheese, grape and jazz night to Abu Dhabi
A two-day art festival is taking place in Alserkal Avenue this weekend
Transport to Greece as Opa's monthly brunch returns
Al Qana update: Abu Dhabi mega project announces four new F&B outlets
YOU SHOULD CHECK OUT
Our website uses cookies and other similar technologies to improve our site and your online experience. By continuing to use our website you consent to cookies being used. Read our privacy policy here.