Dubai Opera has become the place for injecting a little culture into one’s life, having hosted a number of high calibre performances from full-cast productions of hit musicals such as Mary Poppins and Les Miserables, to the BBC Proms which saw the prestigious BBC Symphony Orchestra grace the stage.

What some might not know about the 60,000 sqm dhow-shaped building is that it was purpose-built to accommodate more than just stage shows and concerts.

The building’s architect, Janus Rostock, designed the 2,000 seat space to transform into three modes; from a theatre into a concert hall, and into a ‘flat floor’ for events. 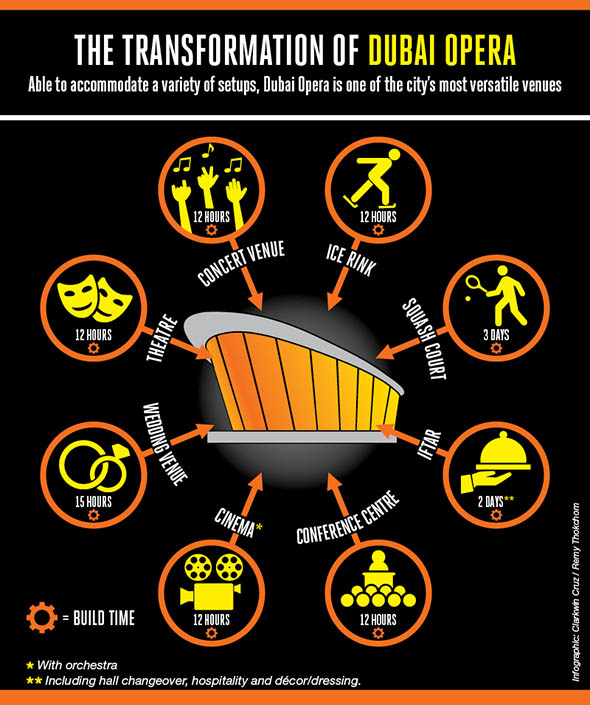 This gives Dubai Opera an unprecedented level of flexibility, and we’ve rounded up some of the cooler transformations the venue has undergone since opening its doors in August 2016.

Yes, that’s right, an all-glass, regulation-size squash court was erected in the centre of the Dubai Opera stage for the PSA Dubai World Series finals in June 2017, making it the first sporting event ever to be held at the state-of-the-art venue.

A cinema with a live orchestra pit

Fans of classic Spielberg films Raiders of the Lost Ark and Jurassic Park were treated to a special screening of both in April 2017, complete with live musical accompaniment from the 21st Century Symphony Orchestra.

For a special production of The Nutcracker, Dubai Opera had an ice rink installed that took more than 140 man-hours to build and required over 2,500 litres of anti-freeze.

More than 14 tonnes of ice (that’s the weight of three elephants!) were generated over the course of its four day run in December 2016.

Later this month, Dubai Opera will be hosting daily Iftars as it transforms into a giant banquet hall with a 5-star buffet.

In order to achieve this it will have to relocate 900 of its 2,000 seats using a series of hydraulic lifts and seating wagons, storing them in garages beneath the theatre.

What a night! Thanks @JamesMorrisonok for an amazing soulful rockin’ performance ?? #DubaiOpera #JamesMorrison #LastNight #Concert

Dubai Opera’s not just about sopranos and orchestras. In October 2016, Brit-award winning singer-songwriter James Morrison took the stage proving that the normally placid venue could be turned on its head for an all-out rock concert.

When in ‘concert hall’ mode, a series of towers and reflectors are placed on stage and overhead to enhance sound quality.

Aside from being the most versatile concert and theatre venue in the city, Dubai Opera can also play host to exhibitions, fashion shows and conferences in its ‘flat floor’ mode.

We’ve heard rumours of opulent weddings taking place inside the building, although we imagine that the kind of people who can afford to hire out an opera house to get married in can also afford to keep it secret as we’ve struggled to find any evidence on social media.

The above video, however, is a great illustration of the transformation that takes place when Dubai Opera goes from state-of-the-art concert venue to lavish gala dinner.

Culture
EDITOR’S PICKS
Ramadan in Dubai: 38 iftars to try
READ MORE
Where can Dubai residents travel? Check out these 14 destinations
READ MORE
Rumours, facts and reveals: New Abu Dhabi bars and restaurants
READ MORE
UAE announces reduced working hours for Ramadan 2021
READ MORE
MOST POPULAR
How many days will we get off for Eid Al Fitr 2021?
Urban Outfitters' sister brand Anthropologie to open in The Dubai Mall
This double vacation offer includes stays in both Dubai and the Maldives
Dog of the Month: ubk launches unique social media competition
Watch: A House of Artisans has opened in Abu Dhabi
YOU SHOULD CHECK OUT
Our website uses cookies and other similar technologies to improve our site and your online experience. By continuing to use our website you consent to cookies being used. Read our privacy policy here.